The film’s first theme is strong too. The world is looking for someone to fill Tony Stark’s shoes, and even Tony himself entrusted Peter Parker (Tom Holland) with his legacy. Having a gaggle of reporters harass Peter with questions about taking over The Avengers is not a subtle way to do it, but now it’s on the table. 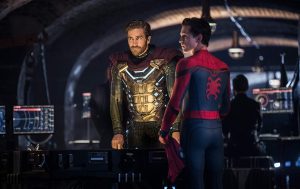 Nick Fury (Samuel L. Jackson) is short on heroes too so he recruits Spider-Man while Peter is on his class’s summer trip to Venice. Elementals are terrorizing international cities, and even though Quentin Beck (Jake Gyllenhaal) comes from another dimension with some powers, they need to team up. Understandably, Peter Parker would still like to be a teenager. He just got back from five years of being snapped. 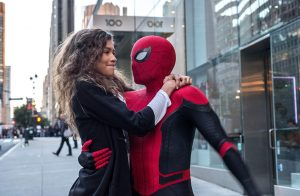 They end up covering a lot of Europe as Elementals attack Venice, Prague and other cities while S.H.I.E.L.D. schedules more pit stops for Peter in Austria. I really wish someone would tell this crew that their high school shenanigans are not funny. I suppose I can forgive the whole Peter trying to sit next to MJ (Zendaya) schtick because that’s what teenagers do. We definitely do not need to see Mr. Harrington bumbling with his camera. All of that is keeping us from seeing Spider-Man. 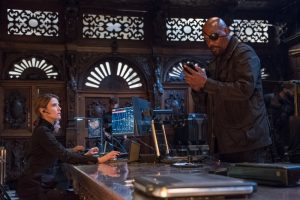 It’s not even enough they insist on making bad jokes. They have runners that are never funny, don’t get funny again, and they keep making the same joke throughout the movie. It’s like a little kid who learned one joke and insists on telling it over and over to every adult they meet. They also keep interrupting exposition with jokes. That only makes it take longer. Like please, just let Nick Fury talk so we can move on. At least Fury calls out the high school bullshit. These movies need more Samuel L. Jackson calling out the bullshit.

Seeing Spider-Man sling his webs through Venice is cool, but fighting another CGI monster is not nearly as interesting as what he faces in the second half of the movie. Fortunately, the action sequences employ a lot more of Peter’s own web tricks than Stark’s technology, although Peter still draws on Stark tech throughout.

Far From Home is still so post-Iron Man that it still feels like an Iron Man movie. It has a little more thematic connectivity here because Tony is gone and left a void that Peter could fill. That’s better than just having Tony give Peter all his suits and all his powers, and there are some fun references to perhaps less memorable corners of the Iron Man movies. Still, it would be nice to see a Spider-Man movie that was all about Spider-Man again. 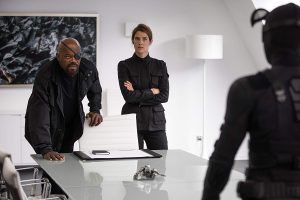 Fury is a lot more integrated into Far From Homethan Tony was in Homecoming. It looks like they actually had Jackson committed to the film to be there for all of his coverage.

The second half of the movie really explores the themes in an interesting way. Not only does the villain’s scheme pray upon Peter’s insecurities, but it also holds the audience a bit accountable. I will probably own Spider-Man: Far From Home on Blu-ray, but I will only ever watch the second half again. I’ll never sit through that insufferable setup again.