For audiences who saw Free Fire at the Toronto International Film Festival Midnight Madness, it was the first time they saw Brie Larson in action. By now audiences have seen her run from King Kong on Skull Island too and will soon see her enter the Marvel Cinematic Universe as Captain Marvel. 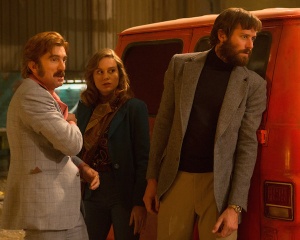 Larson spoke with reporters in a roundtable interview in Los Angeles last week about her work on Free Fire. She plays Justine, a criminal buying weapons in an arms deal that goes bad, leaving all sides holed up in a warehouse shooting at each other. Free Fire opens Friday in theaters.

We Live Entertainment: When you got into acting was action hero ever your dream or something you even thought was possible?

Brie Larson: That’s interesting. I don’t think I ever, even now, think of it in terms of anything like that. I don’t think about the archetypes of the roles at all or even the genre. It’s just that as my life has gone on, I’ve had opportunities and certain scripts have come my way and you rad it and you just feel this pull towards it. A lot of the time you don’t really know why you’re drawn to it and that’s my reason for doing it. It’s a year’s worth of conversations with yourself and with a director and with other cast mates and then with the journalists. It has to be something that you don’t really know. There’s no end point to it so I don’t know. I don’t think that being part of action was my reason for doing this. It’s just whatever the story under the story is.

Q: How morally ambiguous is Justine?

Brie Larson: It’s kind of surprising, isn’t it? I think you don’t really understand the complication and the depth of her until much later in the film, which is rare to go, “Oh! She’s that kind of person?” It’s part of what interests me about her. At the beginning, you see her as actually very calm and quiet and trying to camouflage, not asserting herself too much, allowing all the other dudes to be the masterminds. She’s done a really good job of playing that game and you don’t know at first whether she’s super naive or rally savvy. Then as time goes on you realize she planned for a lot of things, but she also didn’t plan it very well. I can’t give her a ton of credit. She had a kind of bad plan that seemed like a good idea at the time.

Q: Was the ‘70s pantsuit fun or did you hope for a more flamboyant costume?

Brie Larson: Part of that was my choice. She’s trying to not be super flashy. Also, I don’t know if this even comes through in the film or not, she doesn’t have money. She doesn’t come from money. She doesn’t have money. So this piece of clothing is the nicest thing she owns that she probably stole for this one deal to make it seem like she’s really amazing. It’s just for show. The dudes are really the ones that are the peacocks. They’re the ones that have all the hair and stuff. She’s actually playing it down because she wants them to feel like they are the most powerful and amazing because it puts them where she wants them.

WLE: How did it feel to hold the guns and feel them firing? 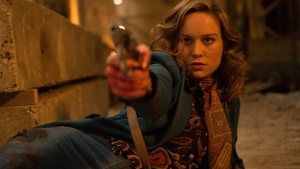 Q: Could you tough it out for the craft of acting?

Brie Larson: Oh, of course. That’s part of the job, putting yourself in uncomfortable situations and I don’t think my character is supposed to be particularly good at holding a gun. I don’t think I realized how uncomfortable I was with it until I started shooting the film that it’s a piece of equipment I feel odd holding in my hand. I’ve never experienced that before, touching something and being like, “I don’t feel like I should have this. It feels like I shouldn’t be near it.” Which is an interesting new experience.

Q: Was it loud? Did you have earplugs?

Brie Larson: Yeah, we went through a lot of earplugs. My bag in the movie, we had some that were wax. The bottom of my bag in the movie was completely covered in wax from putting one in. Sometimes you’d be off camera and then on camera. You’d be off camera when a gunshot happens so you have the earplugs in. Then you have to run across the screen and you can’t see them so we were constantly putting them in and taking them out, having one in, having another in. There were earplugs everywhere, all over the floor, all over my bag, all in my pockets. 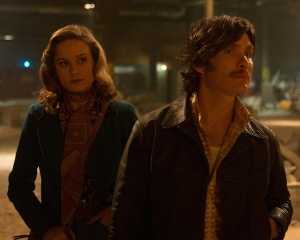 Q: Was it also important to show the effects of violence, that no one’s invincible?

Brie Larson: That was part of the appeal for me. I love movies and I’m such an avid movie watcher but movies are like this weird funhouse mirror that’s reflecting back on society. Watching movies was how I learned about different parts of the world. It’s how I learned about different periods of time. It’s not until I’ve gotten older, I’m like, “That’s not history. Movies are not history.” They can give us a flavor of it but it’s told through the eyes of an individual, of an idealized world. So I think Ben’s response to that is, “How can we make this what it actually is?” Which is not glorifying this at all, showing how ridiculous the whole thing is. The first time I watched the movie, I remember being about 45 minutes in and I was laughing, I was so entertained and then I was like, “Why is this happening?Why is everyone still in this room?” Just one person has to go, “Hey, I don’t wanna do this anymore,” and everyone’s like, “Yeah, me too” and you just drop the guns and walk out. This could’ve been a short film where everyone was just like, “Nah, I don’t want to do that. Why do we all need to die for this? For what? It’s not even that much money.”

Q: Is that a metaphor for today?

Brie Larson: You tell me. I have my reasons for wanting to explore this as something that’s part of culture and something that’s part of culture and part of the industry that I’m in. On the side of being a woman, it’s been important for me to say, “Guess what? We’re lots of different ways and I’m going to do my best to show all the different sides that I can portray and I hope other women pick up where I’m leaving off because I can’t do it all.” It’s the same thing with genre and the way we’re objectively looking at things. Being part of films that say, “That doesn’t really look the way that we’ve maybe done it before,”  that’s how we continue to improve and that’s how my industry continues to improve.

Q: How are you preparing for the physical element of Captain Marvel?

Brie Larson: The costumes and all the stuff that’s on the surface, there are people you should talk to that are really, really amazing and interesting and they’re the ones in charge of that part. I’m just in charge of what’s going on in her head.

Q: What’s been fun about researching and figuring out the human side of Captain Marvel?

Brie Larson: It’s always, for me, about the complexity. The thing that I love about her is that there are these actual two sides to her. There are these two things that are at war with each other. I feel like that’s what I love about being a person is that we’re constantly trying to balance between these two sides of ourselves, or many sides of ourselves. It’s such an amazing opportunity to be able to put that metaphor on the outside and make that part of what her conflict is. But we’ll see what the movie is.

For audiences who saw Free Fire at the Toronto International Film Festival Midnight Madness, it was the first time they saw Brie Larson in action. By now audiences have seen her run from King Kong on Skull Island too and will soon see her e...
0
Average User Rating
0 votes
Please sign in to rate.