The rise and fall of wealthy people, especially women, never fails to fascinate. The iconic 1975 documentary Grey Gardens (about two aging, eccentric, destitute relatives of Jackie Kennedy Onassis) still resonates to this day, and we couldn’t get enough of The Queen of Versailles (the story of a fallen heiress) a few years back. But that is only one of the reasons why French Exit, though fictionalized, will have you captivated with its fallen star from beginning to end.

French Exit is based on a bestselling satirical novel written by Patrick DeWitt, who also penned the screenplay for this brilliant, biting adaptation. It features Michelle Pfeiffer as Frances, a widowed New York socialite of a certain age whose once-abundant wealth has dwindled to nil. Unable to make ends meet, she decides to sell her jewelry and antiques and try “French disconnection” for a change. She relocates to a friend’s empty Paris flat with her long-suffering 20-something son, Malcolm (Lucas Hedges), and their persnickety black cat, Small Frank (voiced by Tracy Letts). French exit is a term that describes the act of leaving a gathering or a date without saying goodbye, and that is basically what Frances does. She’s got no plan, but that’s just part of the ride—despite her never having worked a day in her life, the universe has always taken care of Frances. 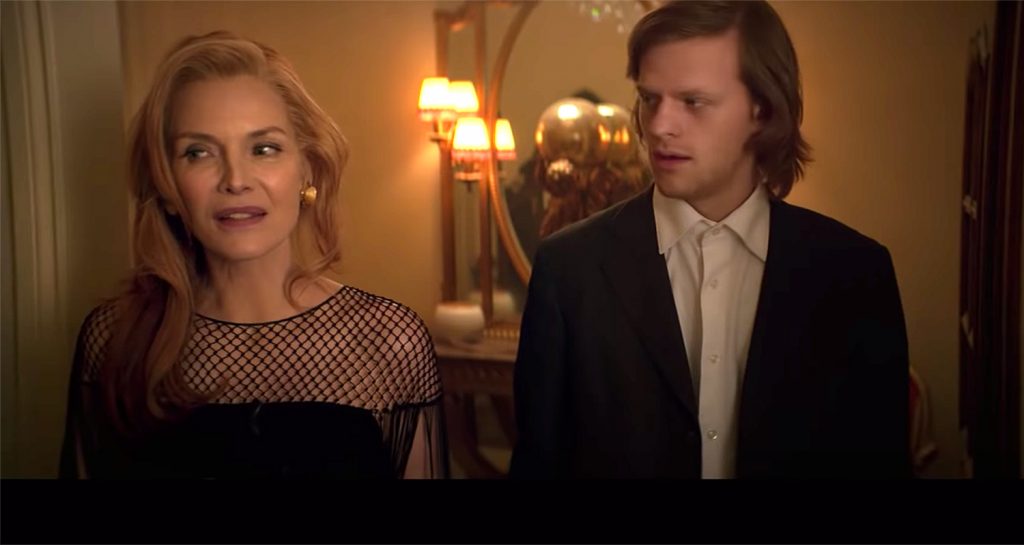 Director Azazel Jacobs’s style may bring to mind Wes Anderson, Charlie Kaufman, or Michel Gondry, but his presentation and execution lack their over-the-top pretension. The adventure is more magical realism than surreal or absurdist, so the spare style serves the film quite well. It is a classic French farce, yet without any of the histrionics. New York City and Paris are beautiful historical cities, but the cinematography doesn’t fetishize them in any way. By the same token, the piano-heavy score is appropriate and unobtrusive. This allows the real stars—the characters—to shine.

The legendary Frances is the magnetic center of it all, while Malcolm floats haplessly in her orbit. Small Frank, who houses Frances’s dead husband’s soul, is less easygoing—in fact, he runs away and disappears into the City of Lights, which prompts Frances to hire a psychic and a detective to find him. The clairvoyant, Madeleine the Medium (Danielle Macdonald), conducts a séance, consisting of the mysterious P.I., Julius (Isaach De Bankolé), and a lonely ex-pat, Mme. Reynard (Valerie Mahaffey). 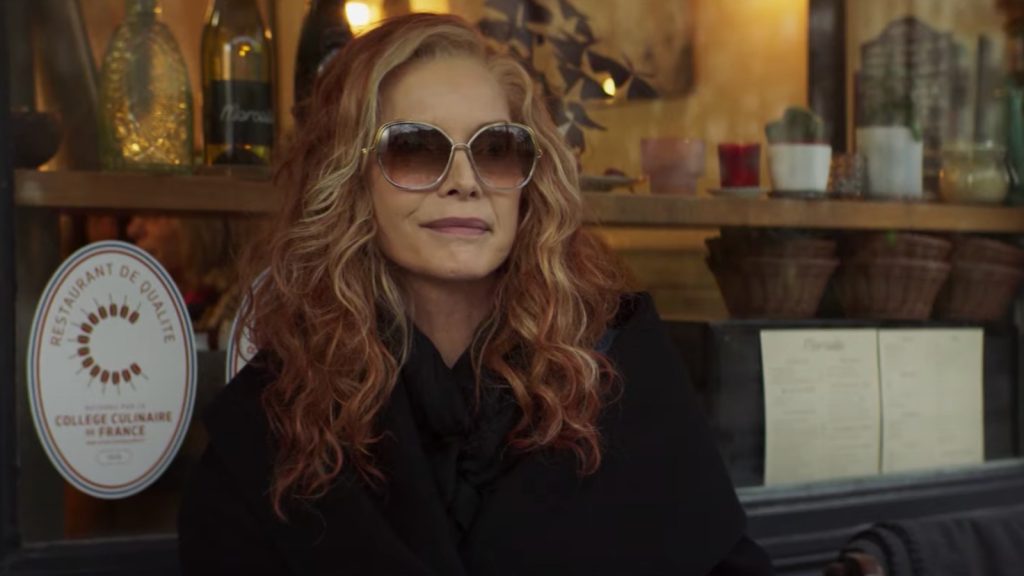 Pfeiffer has been nominated for a few Oscars, but she hasn’t won any—yet. Her performance in French Exit is among her best and is certainly award-worthy. Frances’s backstory isn’t overly-examined, which allows us to imagine all sorts of things about what her life was like and how she got to be the way she is. Frances is almost sociopathic in her aloof, zero-fucks-given M.O. She is a Cruella Deville society diva in fur and stilettos who spouts sneering quips while puffing cigarettes and sipping cocktails. But there’s wit, warmth, and vulnerability simmering beneath the icy exterior that is both perplexing and endearing. So even if Frances is not particularly likable at first blush, by the time the final frame fades, you will have fallen under her spell.

Without Pfeiffer in the role, French Exit may not have been as charming as it is. But it’s still a solid black comedy with just enough fantasy to make it stand out. 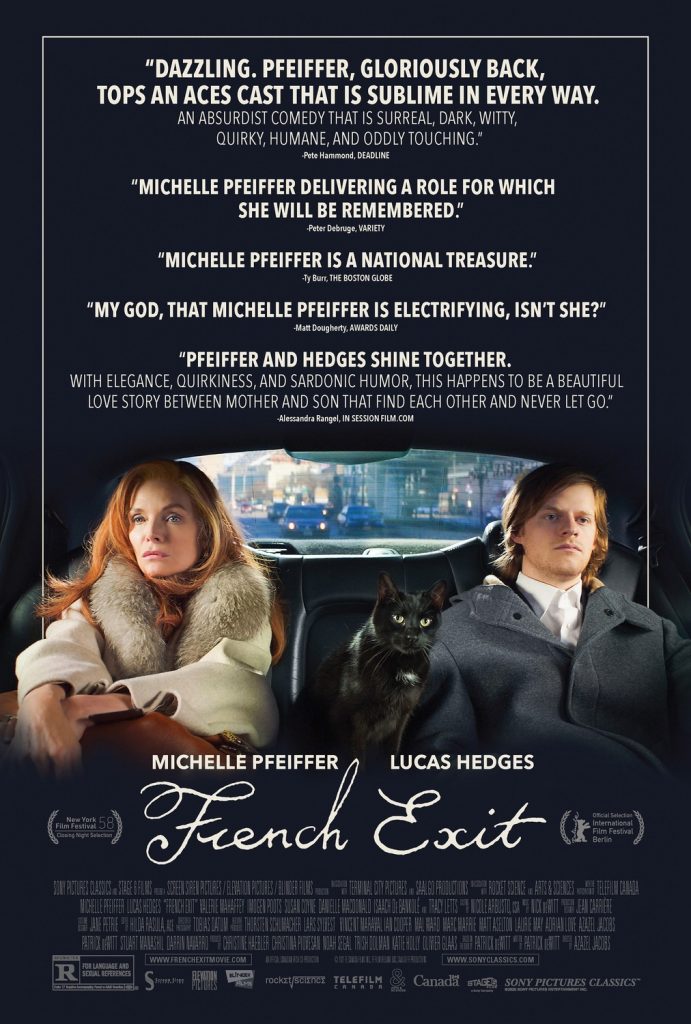 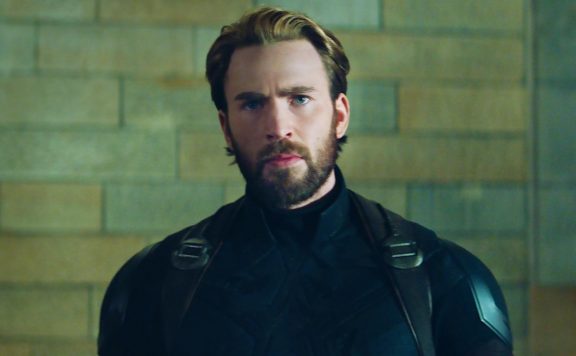 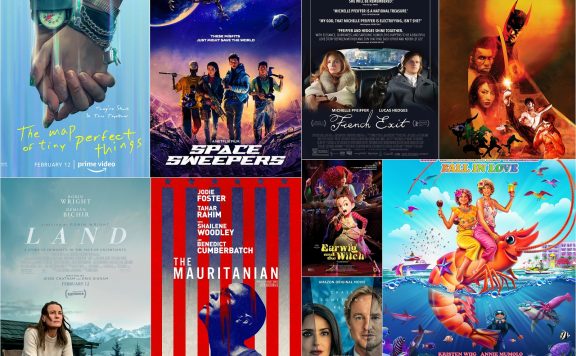