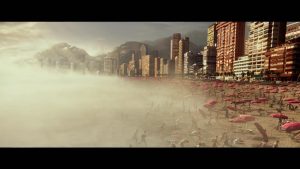 Geostorm is a perfectly fun disaster movie that knows exactly what it is. I went to see the first available show in 4DX since I figured a disaster movie was made for the enhanced effects. San Andreas was my first 4DX movie so the logic followed that Geostorm would have a lot of opportunities for the format. I have to warn 4DX fans like me that Geostorm is a lot rougher than experiences like San Andreas or Baby Driver.

Jake Lawson (Gerard Butler) designed the weather satellite Dutch Boy to prevent natural disasters and it worked. But Jake will defy authority and break the rules if it means saving lives. His own brother Max (Jim Sturges) has to fire Jake, but when Dutch Boy starts creating rogue weather events, who’s the only man they can call to fly up to space and fix it? 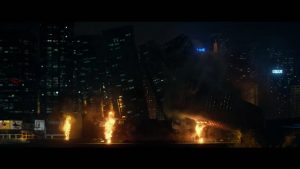 Disaster movies have long since abandoned exploding miniature White Houses but as CG set pieces go, Geostorm has some cool ideas. I’ve never seen buildings fall like dominoes before, or fleeing masses frozen on the spot. Frozen birds fall from the sky. When I say, “Make movies we want to see,” this is what I mean. Come up with something that makes me go, “That was worth leaving the house.” 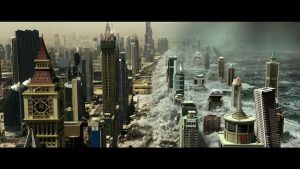 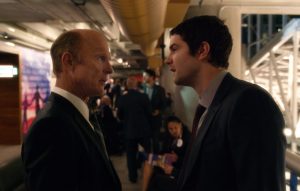 On the ground, Max and his Secret Service agent fiance Sarah (Abbie Cornish) try to find out who’s manipulating Dutch Boy. Cornish is badass and cool under pressure. Dean Devlin cast Ed Harris for the Ed Harris part, and Harris doesn’t half ass it just because he’s using this salary to pay for the next movie he directs. It feels like everyone involved knew the tropes and celebrated them. Hong Kong scientist Cheng Long (Daniel Wu) drives an electric car probably because Dean Devlin is such a proponent. 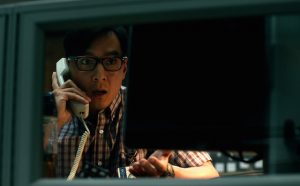 There are some cool 4DX effects like the strobe lights matching the lightning storms or flashbulbs at a senate hearing. There’s plenty of movement when Jake (Gerard Butler) is floating in space, and subtle vibrations when the space station doors open and close. Yet Geostorm uses the “back tickler” more than I’ve ever experienced. Daniel Yi told me it’s called the back tickler but really it’s a back puncher. This is the one 4DX effect I would like to see removed. There’s no scenario where it feels good to be punched in the back. It happens when Jake scrapes off the space station panels, has a fistfight and a car wreck back on Earth too. 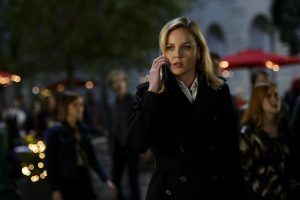 Geostorm is not the first 3D movie I’ve seen in 4DX but it had more spray than any others I’d seen, which raises an interesting conundrum. The water spray really did feel like a drizzle during rain storms in the film, but then the water messes up your glasses. Bring napkins from the concession stand. Yet there is no heat simulator for the broiling Hong Kong sequence. 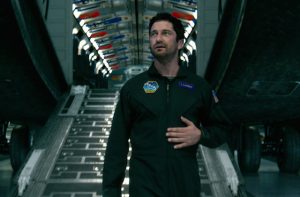 Partly, the film did not give the 4DX art directors as much to work with as you might expect. There are the big disaster set pieces, but plenty of down time in between to take a break. At some points they have the seats moving just when Jake is pacing around a locker room, which is kind of a stretch.

During the space scenes I thought I noticed the seats moving at different paces. I usually enjoy watching all the seats move in unison, and they did for most sequences. It may have been an optical illusion from where I was sitting, but it seemed like the seats beside me were “floating” at opposite intervals to mine, like a see saw. If so, that’s a cool twist on the motion simulation. 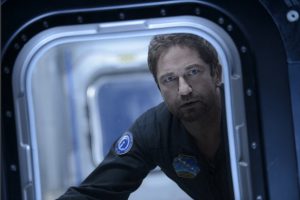 Each 4DX movie is a unique experience and they don’t all fit the way you think. For example, Mad Max: Fury Road did not have much to play with despite several lengthy car chases. Baby Driver was natural and organic, largely because of the film’s musical styling. Geostorm has some of the elements but is also such an aggressive movie, the 4DX experience replicates that in kind. I’ll still review more 4DX movies, as each one is a unique experience, and I would’ve still enjoyed Geostorm sitting still anyway.

Geostorm in 4DX Review: Roughhousing in the Aisles