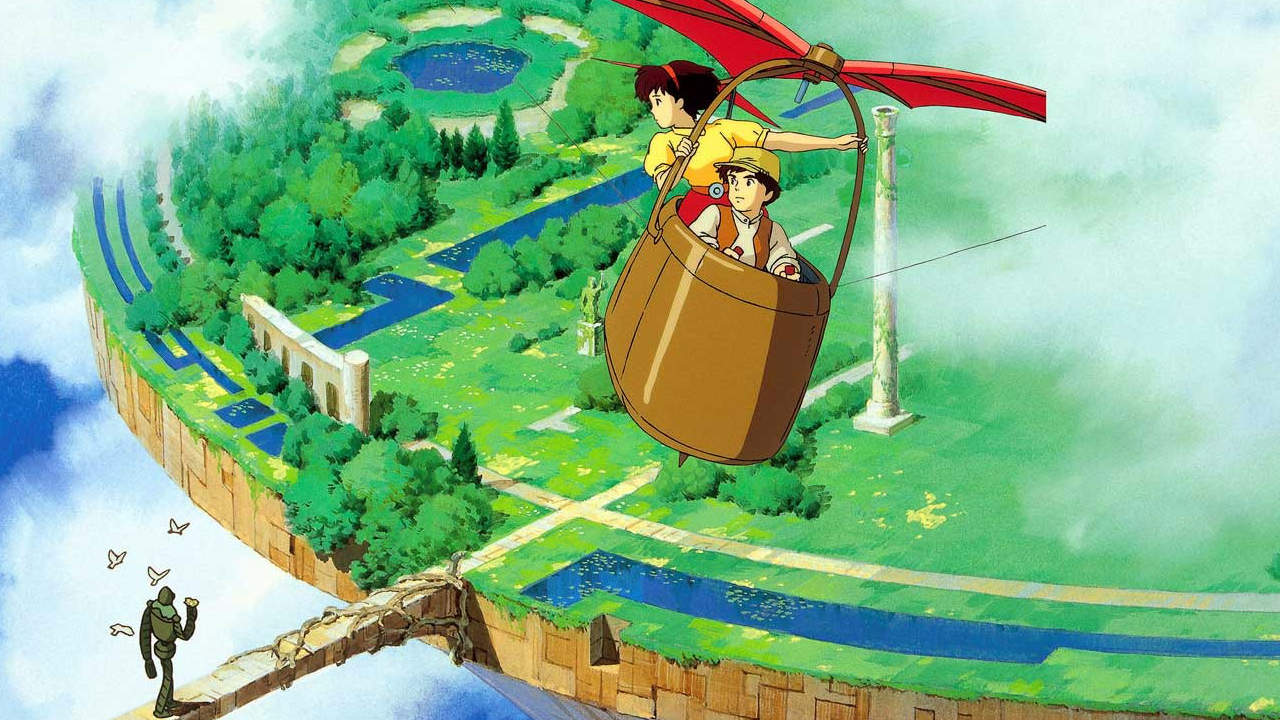 As the first entry in the Studio Ghibli brand, Castle in the Sky set the foundation of nearly three decades of poignant storytelling we’ve come to expect from the innovative mind of Hayao Miyazaki. And while it’s a much darker adventure than Miyazaki’s following animes, My Neighbor Totoro and Kiki’s Delivery Service, Castle in the Sky does cement that signature coming-of-age vibe.

Miyazaki wastes no time at all defining the scope of Castle in the Sky. Within the first few minutes, we’re up in the air with young Sheeta (voiced by Keiko Yokozawa), who’s been kidnapped by the government. She’s in possession of a powerful amulet that everyone seemingly desires. Also on her tail are a family of sky pirates, lead by Captain Dola (voiced by Kotoe Hatsui). In the midst of the sky battle, Sheeta plummets from the airship, landing in a small mining town.

It’s there where she befriends Pazu (voiced by Mayumi Tanaka), a local boy who takes her in and is fascinated by her magical escape. Pazu is under the impression that her amulet in connected to the fabled city of Laputa. His father went looking for this particular castle in the sky, only to never return. The concept was inspired by Jonathan Swift’s floating island of the same name in Gulliver’s Travels.

Unlike many of his future films, Miyazaki never lingers on one location, allowing the characters and situations play out in a singular environment. We’re not at just a bath house like in Spirited Away or a secluded home in the woods like in My Neighbor Totoro. Instead, Castle in the Sky is continuously building tension as Sheeta and Pazu narrowly escape one situation after another.

The coming-of-age aspect has its brief moments here and there. However, the film concentrates more on the bravery and friendship of Sheeta and Pazu. Miyazaki is incredibly skilled at writing youthful friendships as they continue to blossom. He weaves in genuine moments where Sheeta cares about Pazu and vice-versa. And when there is tension between the two, the arguments are heartbreaking. There’s also a destiny arc in play as well, but serves as much importance as the coming-of-age arc. Castle in the Sky isn’t so much focused on who they become, but who they are in the heat of confrontation.

While Castle in the Sky is one of Miyazaki’s longer animes, he leisurely strolls through his storytelling. It’s almost contradictory when a good portion of the film is action-oriented all over. But even with action set pieces staged in the sky and in the streets of a mining town, the pacing doesn’t match the intensity. That may be slightly frustrating, but like other engaging Miyazaki animes, we’ve come to expect this. Princess Mononoke and Spirited Away both clock in over two years, but can also be a test in length.

Castle in the Sky will seamlessly resonate with younger audiences, hinging on the bonds between Sheeta and Pazu. Older audiences will be drawn more towards the gorgeous aesthetics. Visually, Castle in the Sky is leaps and bounds beyond many of the Miyazaki films that will follow. While the animation has improved, the visual scope is utterly breathtaking. Fueled by steampunk, floating castles and robots, there is this constant sense of past and future mashing up together. Joe Hisaishi’s compelling score also populates the film with plenty of fitting compositions.

Castle in the Sky is a buoyant adventure that conjures up much originality and heart, which staying true to the human bonds of friendship and loyalty.

Stay tuned next month as Ghibli Fest 2017 continues with Nausicaa of the Valley of the Wind. Check out the full schedule here.

Ghibli Fest 2017 Review: ‘Castle in the Sky’ is a Memorable, Buoyant Adventure