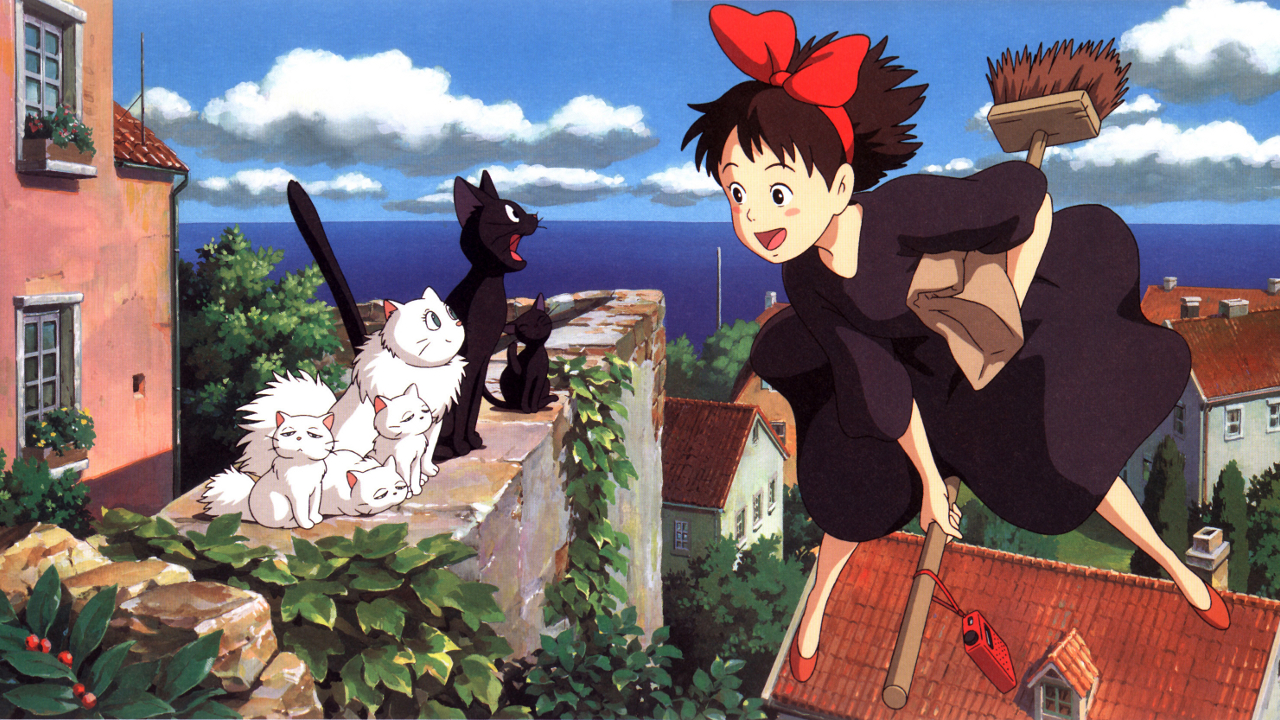 With the whimsical masterpiece My Neighbor Totoro under his belt, visionary Hayao Miyazaki returned one year later in 1989 with a more enchanting coming-of-age journey. Based off the 1985 Eiko Kodano novel of the same name, Kiki’s Delivery Service aims for a more straightforward follow-up from Miyazaki, yet retaining much of its endearing charm.

We’re introduced to the titular Kiki (voiced by Minami Takayama) as a 13-year-old witch, prepared to embark on a life-changing journey. In the world of Kiki’s Delivery Service, 13 is the age of independence and training for a young witch. For contemporary audiences, Kiki isn’t educated like some Harry Potter – sent to a wizarding school for seven years before becoming part of society. No. At a ripe age of 13, she’s already being molded for the real world.

With a broomstick in hand and her trusty black cat Jiji (voiced by Rei Sakuma) by her side, Kiki makes her way to port city of Koriko with all intentions of making something of herself. That’s a massive burden for a newly christened teenager. 30 years after its theatrical release in Japan, the dynamic of youthful independence has shifted. Additionally, Kiki’s Delivery Service like Totoro, is set even earlier. So from 1950s Japan to present day, there is a massive delay in independence, but that doesn’t away from its empowering message. Miyazaki will revisit these themes 12 years later in the highly-acclaimed Spirited Away.

When Kiki arrives at Koriko, she finds herself struggling, failing to play up her strengths. Once she finds her footing in the big city, she’s taken in by a kindly baker (voiced by Keiko Toda), who provides her shelter and sets her on the path to success. She’s met witches skilled in fortune telling. However, she soon realizes her best attribute is her flying. Hence her interest in opening up a delivery service.

Anyone who’s worked a first job knows the tedious, sometimes irksome work that goes alone with earning that paycheck. Miyazaki treats it in a more endearing manner in Kiki’s Delivery Service. Her first job to deliver a stuffed black cat (ironically like her pet cat Jiji), which due to Mother Nature turns out to be more than she expected. It’s a delightful sequence that sets the pace of what’s to come for the rest of the film. Being a witch, which could be interpreted as wish fulfillment, doesn’t necessarily mean that everything come easy. Another lesson Miyazaki tackles here.

Miyazaki builds upon his screenplay by not only highlighting Kiki’s resolve towards independence, but creating a world affected by her gifts as a witch. As the film progresses, the characters Kiki meets through her requests and deliveries shape her as a person. For a while there, she’s the typical workaholic and even rejects a local boy (Kappei Yamaguchi), who takes an immediate liking to her. Shocker.

Like Totoro, much of narrative floats in the wind. Yes, it’s nowhere near as ambiguous as its predecessor. Still, it’s not until the climax until the real conflict begins the settle. The trials and tribulations she endures along the way tie into the finale. You’re no longer bogged down with the expected transformations of adolescence. But there is a grander climactic spectacle to greatly appreciate.

From a visual perspective, Kiki’s Delivery Service still holds up nearly 30 years after its release. The port city of Koriko has a scope that nearly matches that of 1986’s Castle in the Sky. The shots of Kiki flying through the Koriko sky still continue to be mesmerizing to this very day. Miyazaki’s go-to composer, Joe Hisaishi delivers another beauty score to accompany this enchanting anime.

Kiki’s Delivery Service utilizes the most of its 102-minute run time journeying alongside a lovable protagonist who’s caught in the crossroads of change. After all these years, it’s still remains a testament to Miyazaki’s genius to resonate with audiences of all ages.

Stay tuned next month as Ghibli Fest 2017 continues with Castle in the Sky. Check out the full schedule here.