The live action Ghost In The Shell is pretty much still anime. Only now the tools of animation make it look photoreal. That, in turn, makes this cyberpunk even more surreal than watching two dimensional drawings.

The shells are basically human bodies as puzzle pieces that can be removed and replaced, so that’s some body horror that would make David Cronenberg squirm. That creepy Geisha bot that Major (Scarlett Johansson) fights in the beginning is horrifying. 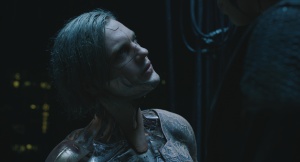 Michael Carmen Pitt plays Kuze in Ghost in the Shell from Paramount Pictures and DreamWorks Pictures.

Yet that’s no different from the humans in this future. Everyone has equipped themselves with some sort of cyber enhancement, ignoring the fact that it’s repulsive. I mean, if you have those X-ray yes, you’d go crazy hearing the lenses shift focus every two seconds. Michael Carmen Pitt gives an effectively glitchy performance as an early model not up to technical specs.

The future depicted in Ghost in the Shell is truly an anxiety nightmare to me. I think I could hang in Blade Runner or The Fifth Element, but this is like Minority Report to an exponential degree. There’s not only advertising and busy visuals everywhere, but it’s not even confined to surfaces anymore. Holograms are hovering over the freeway. 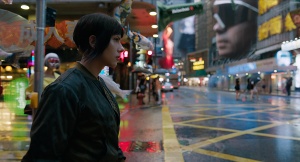 Scarlett Johansson plays Major in Ghost in the Shell from Paramount Pictures and DreamWorks Pictures.

This is truly a stimuli-craving society gone too far. Even a three dimensional display in an office is so peppered with red dots it’s like there’s no blank space. I have a feeling people who value silence and space were left behind. And it’s all animated as digital backgrounds.

Cyberfiction has advanced greatly in the 20 years since the anime Ghost in the Shell, and real world technology has advanced even further. So it is gratifying that the live-action film respects its audience enough to keep up and follow along, even with it’s made-up lingo. We all live on enough screens that they should be intuitive language and concepts. And it should sound disorienting. If millennial terminology sounds foreign, than the evolution of that will be downright surreal.

When we follow Major in a hack, it is a nightmarish vision where she walks through a matrix, and a bad hack is represented as an oppressive zombie horde. The action begins with familiar tropes, like a high dive we’ve been seeing since Goldeneye and Fifth Element and the slow-motion double guns. It progresses into more complicated choreography between digital beings and attackers with little regard for their physical form, so that’s more interesting. When Major fought the spider tank at the end, I felt like singing, “spider tank, spider tank, does whatever a spider tank does.” 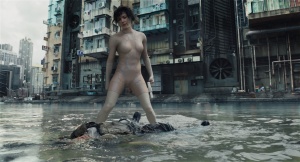 Scarlett Johansson plays The Major in Ghost in the Shell from Paramount Pictures and DreamWorks Pictures in theaters March 31, 2017.

The character design of Major herself is a bit of a conundrum. She’s got detachable plates all over her face and body to be disturbing, but they’ve gone ahead and given her a butt crack. Yet they had the decency to smooth over her nipples. I mean, I always thought anime was about jerking off to drawings of women that didn’t quite look real, so maybe that’s the point.

For all the overwhelming visuals, I did not find the 3D gave it any depth. Maybe the blue filter dilutes the depth. Only one scene on a waterfront outside the city looked vast. Likewise the IMAX screen didn’t quite envelop me. It was more like a 1.85:1 film blown up, but as stated above I appreciated the effect it conveyed simply as a live-action vision of the anime future.

As someone who saw the anime once in college, I felt Ghost in the Shell did a good job making the concepts digestible and giving it narrative drive. Perhaps an anime die hard will disagree, but Franchise Fred gives his consent to Ghost in the Shell. 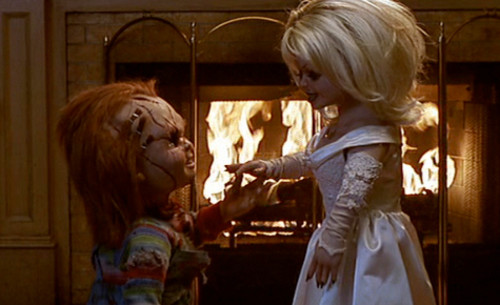 Ghost in the Shell Review: Help, Get Me Out Of This Shell!

The live action Ghost In The Shell is pretty much still anime. Only now the tools of animation make it look photoreal. That, in turn, makes this cyberpunk even more surreal than watching two dimensional drawings. The shells are basically ...
0
Average User Rating
0 votes
Please sign in to rate.