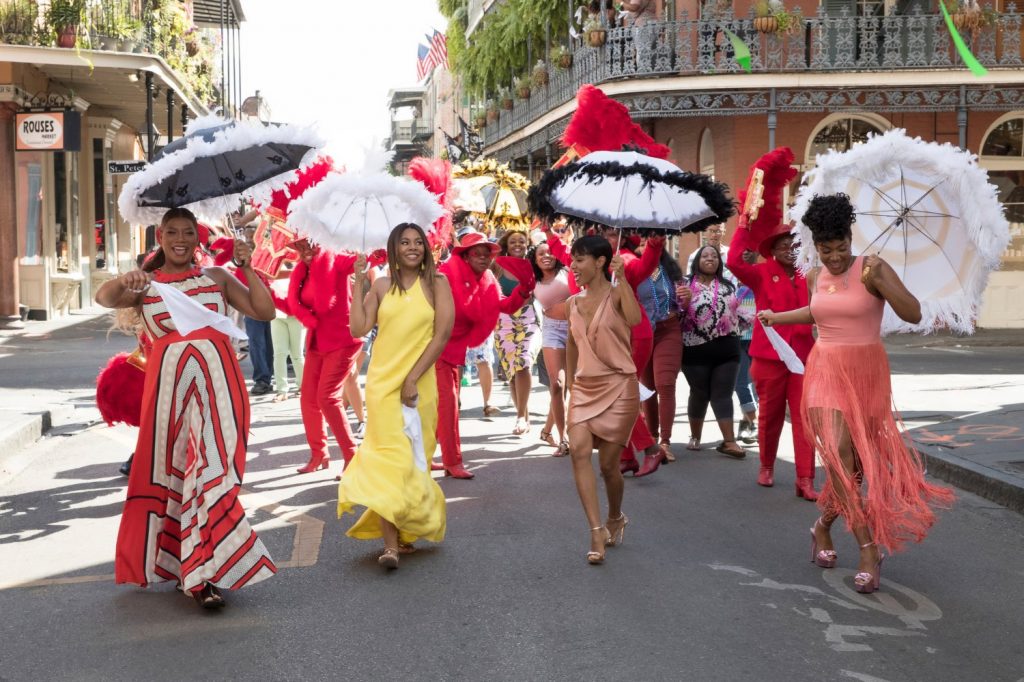 Ryan Pierce (Regina Hall) is a successful author whose books have turned her life into a brand that has inspired millions. In the final stages of closing a multi-million dollar deal, Ryan heads to the Essence Festival as a keynote speaker. Determined to have fun, Ryan invites Sasha (Queen Latifah), Lisa (Jada Pinkett Smith), and Dina (Tiffany Haddish) to join her for the weekend.  The fiery foursome aka the Flossy Posse set out for a wild and fun weekend but soon discover that a lot has changed since their last get-together nearly five years ago.

The raunchy female comedy craze started with Bridesmaids in 2011 and since then has spiraled into sheer laziness. A perfect example of this is last month’s Rough Night, which lacked interesting characters, humor, and heart. Girls Trip is raunchy comedy done right. It has big laughs, heart, and features four wonderful characters who I enjoyed spending two hours with. Girls Trip is the very definition of what a great raunchy comedy should be and not only for females but for males as well.

I feel like whenever studios release a raunchy female-driven comedy they tend to follow the same formula of a successful raunchy male-driven comedy. While Girls Trip does follow a formula, screenwriters Kenya Barris and Tracy Oliver switch it up so that their script takes some chances. Girls Trip is refreshing because Barris and Oliver add in unexpected surprises while following a formula that actually works. 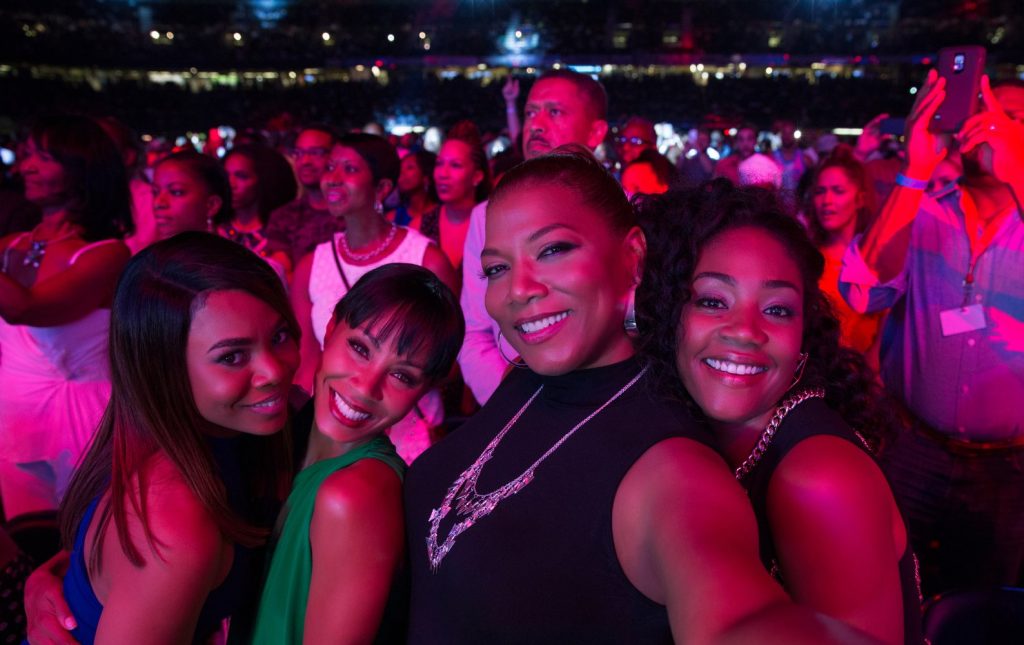 I applaud the writers for not being afraid to tackle serious subjects in a raunchy comedy. These serious moments help to elevate the film well above most other raunchy comedies. Ryan, Sasha, Lisa, and Dina are very different people with their own unique set of problems. The writers take their time to develop each character by hinting upon their personal struggles in-between the jokes.  Ryan and Sasha are faced with life-changing obstacles that if handled the wrong way could ultimately effect their lives and careers. I give the writers and the cast a lot of credit for not trying to dumb down these scenarios. Ryan’s speech at the end of the film is filled with honesty and emotion. This scene is perfection.

Most raunchy comedies, regardless of whether they are male or female-driven, fail to create realistic and genuine characters. The writers of Girls Trip have written strong and well-rounded characters but the talented cast brings them to life. Hall’s performance as Ryan is complex. Her character has a lot going on and Hall does an incredible job dealing with Ryan’s struggles. This character is a real departure from Hall’s previous roles where she is usually portrays a loud and irrational character. This performance pushes Hall to a whole new level and she absolutely nails it.

While Ryan’s story serves as the foundation for the film, Dina, Sasha, and Lisa don’t get ignored and are more than supporting characters. Dina is the group’s comedic relief and isn’t afraid to tell it like it is. Haddish has incredible line delivery and comedic timing, and there are several moments where her character made me laugh out loud. There is a joke about a ghost having sex with her at a hotel which was just hilarious. She has so many great one-liners that I need to see the film again because I feel like I missed some of them. 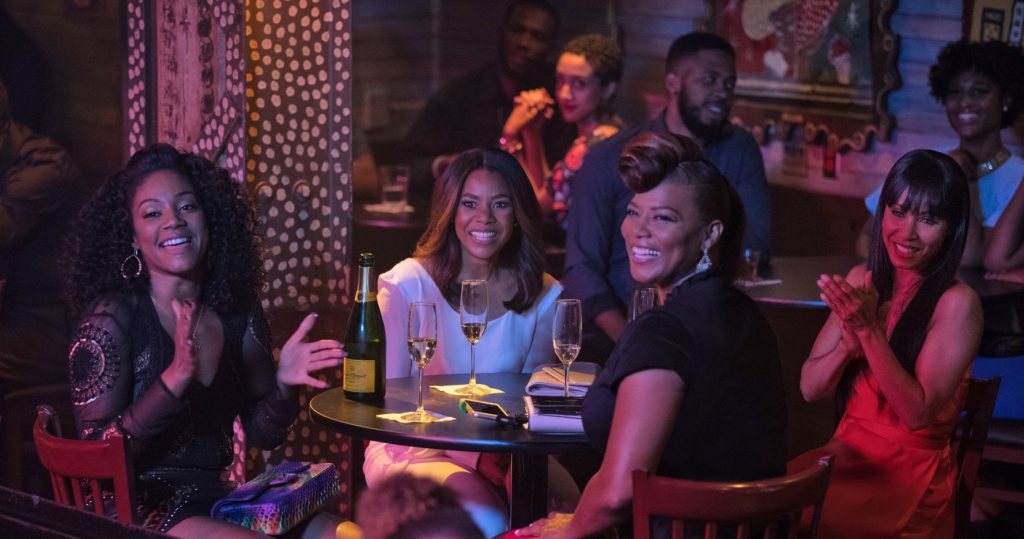 The character of Lisa is a nice change of pace from the clichéd single mom character found in most films like this. Pinkett Smith’s Lisa grows as a person as the film progresses.  We see her struggling with her past and being a worried mother, not only to her children but to her friends as well. However, when Lisa lets loose, she really lets loose. Queen Latifah’s Sasha is grounded in reality. I loved her personal struggle with running a celebrity gossip site and the statement about how celebrities are just people like everyone else.

Malcolm D. Lee is an underrated director. The Best Man and The Best Man Holiday are wonderful films that aren’t afraid to mix drama with comedy. Girls Trip is more comedic than those films but the heart remains the same. Lee excels at capturing all the little moments regardless of whether they are serious or comedic. There is a great scene where the girls pray together about their behavior. This scene isn’t laugh out loud funny but made me smile and was rather sweet. Another stand out scene is where Ryan gives herself a pep talk after receiving  some unpleasant news. These are both smaller moments but Lee captures them with such finesse.

Truth be told, I never expected Girls Trip to be the funniest film of the year but it is. Girls Trip is not only raunchy comedy done right but feminism done right. This is an empowering female-driven story with the perfect balance of humor and heart. Regina Hall, Queen Latifah, Jada Pinkett Smith, and Tiffany Haddish deliver the best performances of their career.  Girls Trip is one of the biggest surprises of the year and one that I can’t wait to add to my personal collection on Blu-Ray. 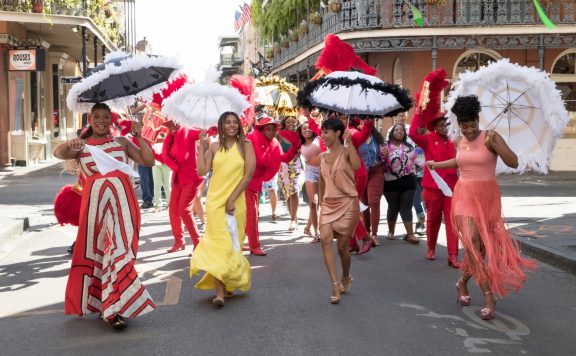 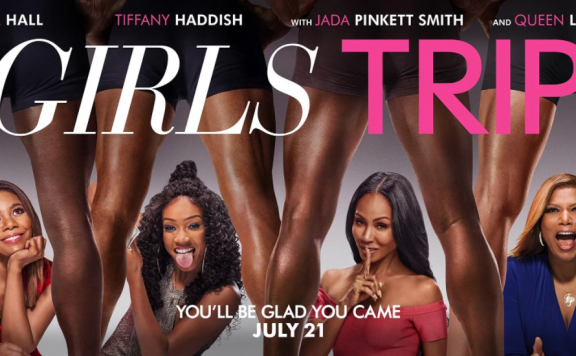 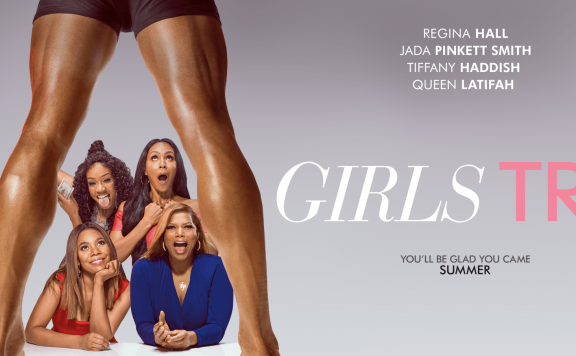