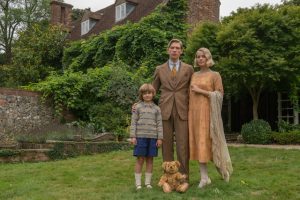 I feel like the inspiration of authors should be a fertile subject for movies. Yet many of the most acclaimed author biopics leave me cold. Finding Neverland, Miss Potter and The Hours to name a few just show the real world inspirations for their authors as on the nose, spelled out bores. So I guess Goodbye Christopher Robin is in good company.

A.A. Milne (Domhnall Gleeson) returns from World War I with PTSD, so moves his pregnant wife Daphne (Margot Robbie) to Sussex. While raising his son Christopher Robin (Will Tilston) in the secluded forest backyard, Milne develops the characters that would become Winnie the Pooh. 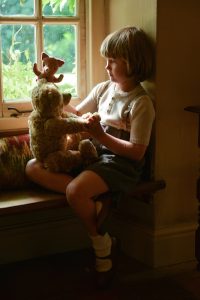 The moments of wonder and inspiration are few and far between. It’s nice when brief animation blends into live-action shots of Christopher Robin playing, with the animation mimicking the style of the old Pooh cartoons. The title appears when Milne tosses a cricket ball and it explodes, but most of the development of the book is completely spelled out.

Here’s how each character got named. Here’s what Winnie is short for. Here’s why the boy is Christopher Robin. Here’s why “the” was important to Milne. Playing with his son and cultivating the child’s imagination is good, but it only seems to serve exposition. 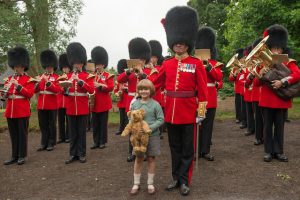 Then comes a long section of dealing with the popularity of Winnie the Pooh. Everyone wants to know about Christopher Robin and each animal character. Milne even exploits his son for media opportunities. Yes, it’s an invasion of privacy that the boy did not choose, but then we have to ask how much of it was really Christopher Robin Milne’s struggle and how much was contrived for a tear-jerker movie. I’m impressed they had a band play the instrumental “Happy Birthday.” Is it just as expensive if they don’t sing the words?

Then Christopher Robin grows up (Alex Lawther) and really starts spelling out all the trauma and abandonment issues he’s suffered. The heaviest emotion of the story is thrust upon an actor who’s barely in the movie. 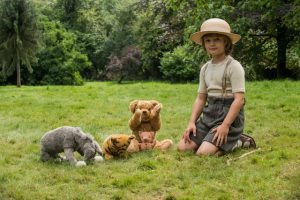 Milne’s anti-war sentiments are given short shrift. He observes that if nothing changes, it will happen again. Here we are in 2017 and it keeps happening. I’m preoccupied by it myself, so much so that I really don’t have time to waste on slight biopics like Goodbye Christopher Robin.

The idea that a child cannot understand the PTSD his father is suffering is poignant, and Milne seems to be doing his best to handle it himself. Gleeson is good letting smirks and smiles seep through a mostly serious man, but the film as a whole does not let much joy squeeze through the rigid agenda it has for chronology and preaching.