Why don’t I have a stub for Guarding Tess? It’s possible I snuck in!

In 1994, Nicolas Cage was not yet my favorite actor. That would come after the action trilogy of The Rock, Con Air and Face/Off. Maybe had I seen Vampire’s Kiss earlier, but I may not have been ready for that yet. He was an actor I respected, and in 1994 he was on a comedy roll after Honeymoon in Vegas and Amos and Andrew, a change of pace after edgy indie movies. So I just wanted to see the new comedy Guarding Tess, and I hated it. So much. Now on its 25th anniversary I wonder, revisiting it as a Nicolas Cage admirer, would I have any new appreciation for it?

At worst Guarding Tess should only be an inoffensive comedy. It’s a mismatched buddy comedy so the worst it could be is not funny, right? Doug Chesnic (Nicolas Cage) is secret service detail for former First Lady Tess Carlisle (Shirley MacLaine). He wants active duty, and even if he wasn’t yearning for more, she’s a difficult curmudgeon. 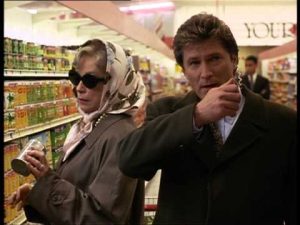 Unfortunately, their odd couple dynamic only amounts to: he wants a better job and she tattles on him. Tess misbehaves, Doug enforces the rules, Tess has the President call Doug to yell at him. He’s by the books, she breaks protocol. They use secret service lingo in the grocery store. Ha! 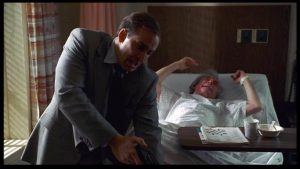 This is a scene from Guarding Tess, not Wild at Heart or Face/Off.

If I had been going along with any of this, Guarding Tess would have lost me in the third act. It’s de rigueur for this kind of comedy to end with some sort of serious crisis. In this case Tess is kidnapped and Doug has to save her. Spoiler Alert for a 25-year-old movie, but the kidnappers have buried Tess alive in an abandoned farmhouse. The movie ends with Doug digging her up. 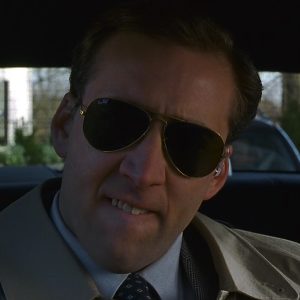 My reaction to the abandoned farmhouse reveal in Guarding Tess.

I’m sorry, if you are making a comedy, you do not bury old women alive in abandoned farm houses. There is no comedy that can support that kind of tonal shift. There aren’t many dramas either. Imagine if The Bodyguard had ended with Kevin Costner digging Whitney Houston out of an abandoned farmhouse. Instead of I Will Always Love You, she’d have to sing Help, I Can’t Breathe. 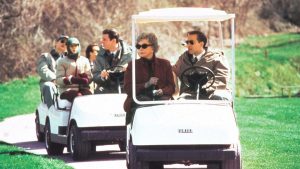 Well, 2019 Fred has seen some shit. The whole world is buried alive in an abandoned farmhouse right now so it doesn’t seem all that far fetched. The serious kidnapping investigation still sinks the movie but it’s supposed to show Doug really cared enough to find her. It would’ve been funnier if Doug had to chase the kidnappers in a hot air balloon and freefall catch Tess, but I sort of admire the audacity of burying her alive in an abandoned farmhouse today. If you’re gonna do something that doesn’t work, you might as well go all out. (And they do, they show her blue faced and everything.) 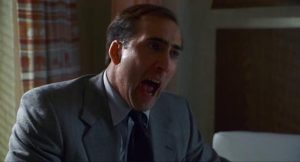 Now that I’ve studied the degrees to which Cage can freak out on screen, I can better appreciate the levels he’s playing in Guarding Tess. He’s reigning it in for a mainstream studio comedy but still losing it for comedic effect. It doesn’t make the material funny but it’s refreshing to remember mainstream Cage. 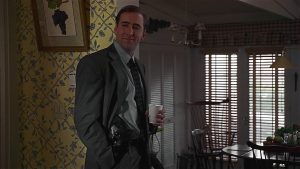 Another thing that makes mediocre comedy hold up better is that at least it was scripted mediocre comedy. Now we have movies where they let the digital camera run for an hour while the actors riff, and the best stuff that ends up in the movie still isn’t that funny and definitely not on point. Guarding Tess’s mediocrity has the decency to not waste your time. 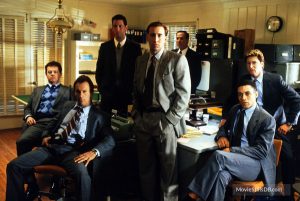 The other secret servicemen have good personalities, like a familiar crew killing time by talking hypothetical boxing matches or playing opera. The film engenders some sympathy for Tess before it goes completely off the rails (or under the farmhouse as it were). Leeches try to involve her in money-making schemes. She is a widow. She’s got ailments as seniors tend to develop. That may have been lost on me as a teenager, but it’s hardly The Notebook for First Lady widows. 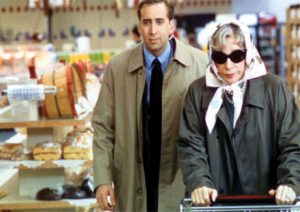 I still wouldn’t recommend it but I don’t hate Guarding Tess anymore. I was originally too hard on it. It wasn’t even Cage’s worst comedy that year. I doubt I’ll revisit Trapped in Paradise because I trust my original assessment still. However, one of his best rom-coms also came out that summer. I definitely hope to revisit It Could Happen To You, which will feature a totally angst-free Cage and restore my faith in him as a leading man.