Focus Features’ Half Brothers is opening in theaters on Friday, December 4, 2020. I recently had the opportunity to screen the film and was pleasantly surprised by how well the film balanced the comedy and the drama. Some of my all-time favorite films are the ones that manage to combine at least two or more genres together. Director Luke Greenfield managed to create an emotionally touching yet very funny film about two brothers from different worlds who are forced to go on a road trip together in order to learn more about their father. About two weeks ago, I had the chance to chat with director Luke Greenfield about how he managed to strike that perfect balance of comedic moments with important serious themes such as immigration.

Scott Menzel: How are you, Luke?

Luke Greenfield: I’m good, Scott. I love what you’ve got going on back there.

Scott Menzel: Thanks. So I would love to start with something that you probably don’t hear every day, but I’m a fan, and I’ve been a fan since The Animal.

Scott Menzel: I like The Animal. I know a lot of critics do not like that movie, but I actually like most early Rob Schneider movies.

Scott Menzel: Yeah, no problem. And I didn’t know what to expect from Half Brothers, and I watched it last night with my wife, and we were both really taken back with the film. It’s a really touching movie, and it has some nice comedic moments, but it’s a really great dramedy, and I did not expect that. What I wanted to open up this interview with is the tone of the film. As someone who focuses traditionally on comedy, did you have any struggles with balancing the tone of the comedy and the drama?

Luke Greenfield: Great question. You know, my whole goal of this movie, the reason why I made this movie, was to shift tones and if I could balance two very different toned stories. One is a grounded buddy comedy, and one is a very heartbreaking, dramatic, tragic journey of an immigrant. It’s a tearjerker, and I love blending genres. I really do, and I’m really glad that you said it’s a dramedy. Because like the way it’s going to be sold, the poster, it’s like you said, you were just walking into a fun comedy. Then all of a sudden, this movie should sneak up on you and really hit you with a real emotional punch, and that was the goal was to look at movies like Cinema Paradiso and these types of movies like Field of Dreams that have these big, emotional endings and just all of a sudden hit. If I could get an audience to be laughing, and then all of a sudden be crying, and then be laughing again, and back and forth. Those movies excite me. The movies that shift tone and have both are what I love in cinema.

Scott Menzel: Yeah. I really enjoyed that aspect of this film. Because when you open up the movie, you get this father/son story, and it’s really sweet. But it’s actually kind of comedic too, and then you go on this road trip. And you’re like, “Oh, here we go. Here’s the comedy.” But it does sneak up on you, and one of the things that I also really like is how you implement some social commentary without shoving it down our throats. There’s the scene in the jail where all of the families are there, and that hit me hard. I was thinking like, “Wow, this is what was going on. This is what people were talking about a couple of months ago.” So thank you for not overdoing it but at the same time making viewers aware that this stuff does happen.

Luke Greenfield: Listen, that is the biggest compliment, Scott, you could give me. You know? And again, I never wanted to make a political movie. I never wanted to force things down your throat, but it’s interesting. There’s a joke going into that scene that you’re talking about where these families are locked in a cage. And there’s a joke right there. There’s a joke where he says, “I thought you guys,” you know, “Well, why don’t you just deport me? I thought you guys loved doing that,” laugh, and then right into his point of view of these families with babies locked in a cage. That’s what I wanted the movie to be, this shift all of a sudden. To shift to, “This is real. This is what it’s like.” And then to kind of go back into that buddy comedy, and then back into this tragic father/son story. That’s what really excited me about making this movie, and that’s what I was really focused on was going back and forth and playing those tones, and was it possible? You know? Because it could have failed miserably, and you could have been like, “What movie is this? You’ve got a goat and people fighting. And then you’ve got families locked in a cage. Like, what are you doing?” You know what I mean? But luckily, that’s not the case.

Scott Menzel: No, not at all. Sadly, they’re telling me to wrap, but I really did enjoy this movie, I appreciated this film, and thank you for making it.

Luke Greenfield: Awesome. Scott, thank you so much. Those were huge compliments. I really appreciate it.

Scott Menzel: No problem at all. Have a great day, and I’ll hopefully talk to you in the future.

Half Brothers opens in theaters on December 4, 2020 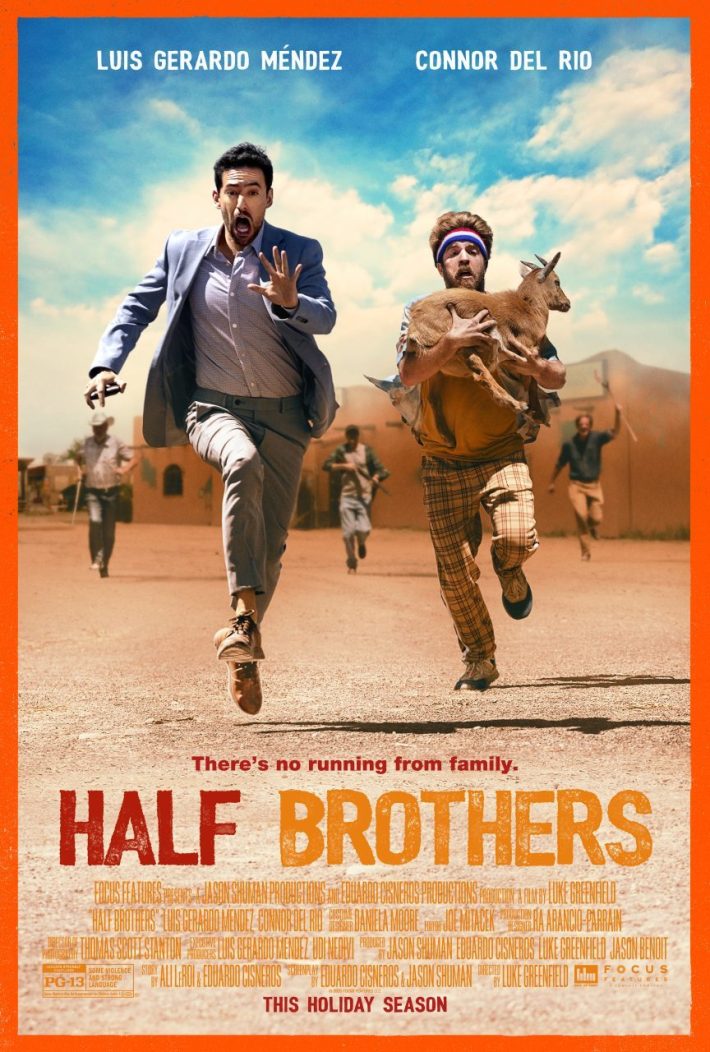 ‘Half Brothers’ Interview: Luke Greenfield on how to blur the lines between comedy and drama