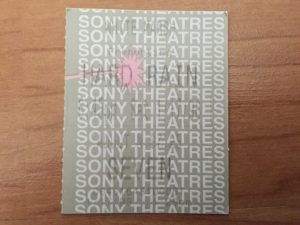 It rains so infrequently in L.A. that when it does, I have a tradition of watching Hard Rain. The slightest bit of rain in L.A. feels extreme, and a downpour that wouldn’t phase the midwest practically shuts down the roads. So what could be more extreme than Hard Rain?

Hard Rain endeared itself to me as soon as it changed its name. I remember the trailer to The Flood still looked like a movie I would see. The Flood tells you what it’s about but doesn’t quite capture the tone. Then I didn’t hear anything about it for a few months. By the time a new trailer played, I thought, “Oh, The Flood is finally coming out.” But it was no longer called The Flood. A badass movie should have a badass name like Hard Rain. It’s not just a flood. It’s much harder. This movie lives up to the bravado of Hard Rain. 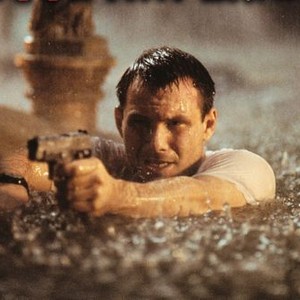 I consider it Die Hard in a flood. A flooded town is contained enough to fit the Die Hard formula, though it is a combo of Die Hard and the ’90s disaster movie Renaissance. There’s never been a better flood movie either. Tom (Christian Slater) is driving an armored truck with his uncle Charlie (Ed Asner) through a town evacuating for a flood. When Jim (Morgan Freema) and his gang try to hijack the truck, killing Charlie, Tom flees into town, hiding the money and fighting the crooks while trying not to drown.

Jet skis in a flooded school, power lines in flooded alleys, shootout in a flooded cemetery, crashing through stained glass church windows, that’s cool shit. And this was nearing the last time you’d see practical stunts in tentpole movies. By the millennium, CGI completely took over. The water adds another dimension to action because people can go underwater evasively or aggressively.

The water adds a sluggish twist to the plot. It takes longer to get from place to place, adding a layer of suspense to races against time. The escalation of flooding is palpable. First they can wade through it. Then they have to take boats. At one point they’re floating in an abandoned car. A statue in the middle of town provides a recurring marker of the water level. By the end, rooftops are just ramps for speedboats.

The coolest part is a bit of a spoiler so skip this paragraph if I’ve sold you already. In the third act, the heroes and villains completely shift. Good guys make a play for the money, and it’s all the bad guys can do to stay alive by fighting them. I’ve certainly never seen that in a Die Hard genre movie before or since. It’s not like Al Powell decides to help Hans Gruber halfway through. Screenwriter Graham Yost has called it a western and I definitely see Treasure of the Sierra Madre. It’s not just lip service. They really establish the Sheriff (Randy Quaid) as honorable. He’s doing the right thing for an ungrateful town. He’s resigned himself to managing his two deputies, one too aggressive and one too incompetent. When he gives up, it’s kind of deadlier than a career criminal. 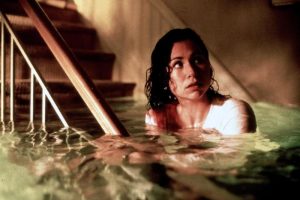 I get to enjoy 96 minutes of flooded action but the actors had to endure months of it. Minnie Driver (who is sort of the Al Powell role) has even spoken about how miserable the experience was. Let me say I am grateful for the sacrifices this cast made being soaking wet 14 hours a day for months. Titanic may have been more grueling but Hard Rain was more thankless. It wasn’t going to get the acclaim or respect, and unfortunately it didn’t even get the success of a Twister and all the future opportunities that would’ve come with such a hit. 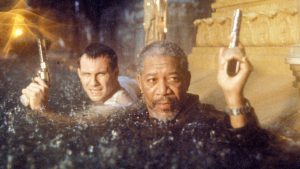 I, of course, was sold so I went right or and saw it opening weekend (how could I even wait until Saturday?) I remember the distinct surround sound of constant rain in the new Loews stadium seating theater in White Marsh. I still hear that sound in my head when I watch Hard Rain on TV. You can still hear the echo in the dialogue on any sound system. I guess only in scenes that used production sound. They probably had to ADR most lines because of the constant rain. 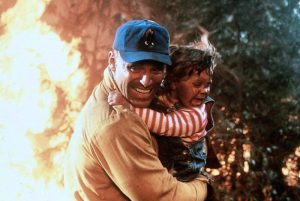 Just one week earlier, another natural disaster based action movie came out. Firestorm tried to make Howie Long an action hero as not just a firefighter, but a smokejumper. Smokejumpers are firefighters who parachute into the middle of a forest fire. But in the middle of this he has to stop a prison break too. It’s not as deep as Hard Rain but still a lot of fun.

Watching both again, Firestorm takes a lot longer to set up the whole premise. It’s more than a half hour before Long starts fighting the convicts. Hard Rain gets it all established in 20 minutes, thus leaving time for it to pull the big twist an hour in. But Long throws a chainsaw at a truck during a speeding chase so it’s worth the wait. 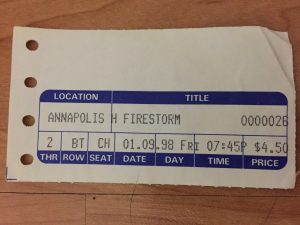 Sadly, with the failure of these two movies, the genre mashup of Die Hard ripoff disaster movie died hard. We didn’t get to see Long continue in movies, and when you think about it, that disaster movie renaissance was very short lived. From Twister in 1996 to Hard Rain in 1998, it was hardly as prolific as the comic book boom that began later that year with Blade and hasn’t stopped. We get sporadic disaster movies like Geostorm and San Andreas. Roland Emmerich still did Day After Tomorrow and 2012 but after Twister the message was: “Disaster movies are back! Now we have the technology to do volcanos and everything!” I guess they only came back as much as the western did where we might get one a year but its not the new industry. 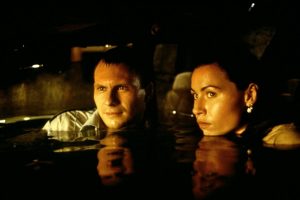 Hard Rain was supposed to be a summer movie. Maybe it would’ve had a chance then. People don’t trust January movies, for good reason. But if it had come out in the summer we might’ve been stuck with the title The Flood and I would’ve written this months ago to commemorate it. Man, what if a Hard Rain stunt show could’ve replaced Waterworld at Universal theme parks? I guess it would’ve had to be Six Flags anyway as a Paramount movie. 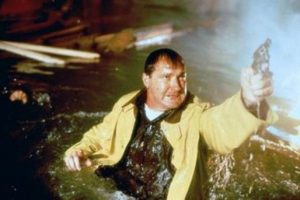 I did ask Yost if the pitch was Die Hard in a flood. He said it wasn’t, but I can still imagine the pitch of “what if someone tried to rob a bank during a flood?” That’s how movies used to be pitched. As cool as it is to see superheroes and annual Star Wars movies, we are missing out on seeing genuinely new ideas. At least the Fast and the Furious movies still bring it, I guess.