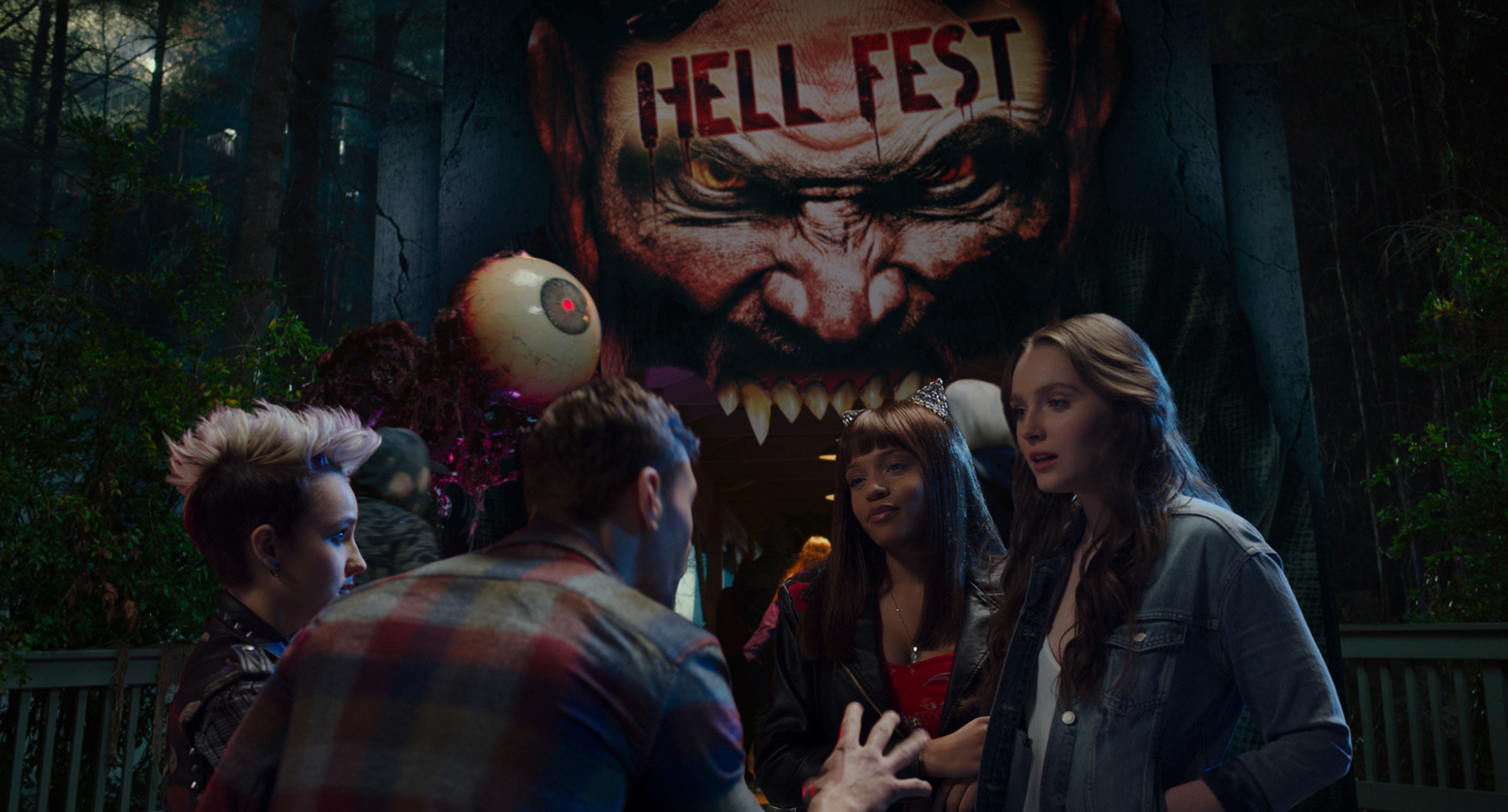 Hell Fest is an original slasher film about a group of friends at a horror-themed amusement park called Hell Fest. While inside the park, Natalie (Amy Forsyth) notices a masked man walking around and becomes increasingly concerned that she is being followed. Her friends, on the other hand, aren’t too worried as they believe that this masked man is just a dedicated park worker who is taking his job way too seriously. However, as the night continues, the masked man continues to show up unexpectedly as Natalie’s fear ultimately becomes a reality.

People love being scared, and horror is undoubtedly one of the most popular of all film genres. Production companies like Blumhouse and Platinum Dunes have focused primarily on horror and as a result, have made a lot of money at the box office. Over the past decade, there have been so many horror reboots, spin-offs, prequels, and sequels that whenever an original horror film is released, there is this sort of higher expectation.  Audiences and critics love original horror films, but they want them to stand out and be something different from everythng else already out there.

It pretty much goes without saying that 2018 has been a great year for horror thanks to A Quiet Place and Hereditary. These two extraordinary films along with Jordan Peele’s Get Out have raised the bar for the horror genre. While Hell Fest won’t be as beloved as the three films mentioned above, I do believe that the film should be celebrated and praised for being an original and terrifying throwback to the great slasher films of the 70s and 80s. Hell Fest doesn’t try to reinvent the wheel but instead takes a great concept and runs with it. 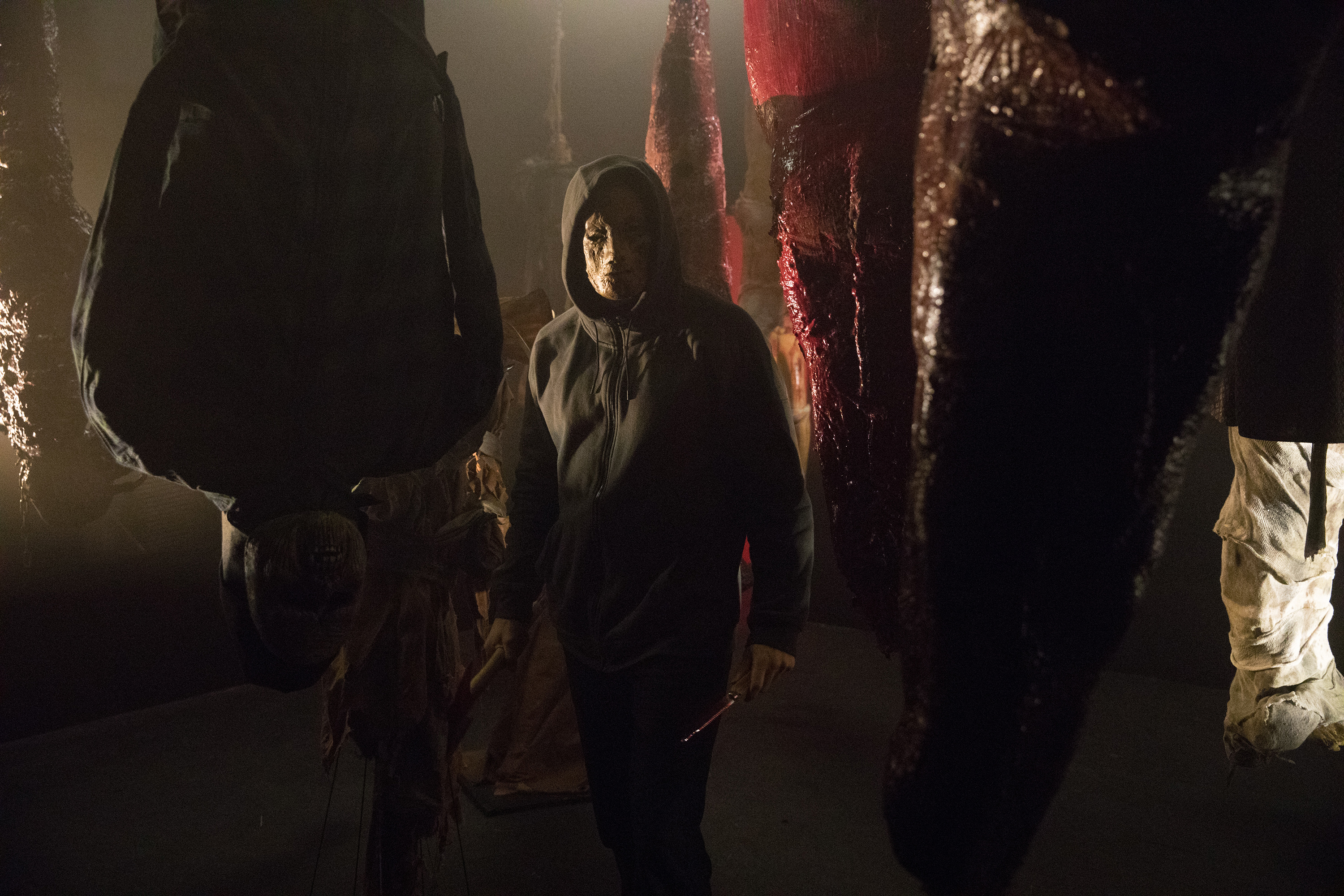 Films like Hell Fest are sadly too few and far between. It is the type of horror film that I feel doesn’t get made all that often anymore. Sure, we have a ton of franchises about serial killers such as Halloween but when was the last time that you saw an original slasher film that wasn’t a remake, reboot, or prequel?  They seem to be very rare and what the writers of Hell Fest have done is created a new serial killer that can go on to part of his franchise. What is so unique about this masked serial killer that stands out from the rest is that we don’t know anything about him is or his motives. All we know is that he wears a mask and goes around to various events like Fright Fest and Universal Horror Nights and kills at random.

There are a lot of things to say about Hell Fest but the biggest reason why the film works as well as it does is that the story is downright horrifying. I can see how some critics might write this film off as just another silly teenage slasher, but when I started to think about this film after watching it, I felt very uncomfortable and now have a new fear that I didn’t have before seeing this film. We often don’t like to think about the bad things that could happen when we are going somewhere like an amusement park, but this film proves how simple it is for some random person to just walk into a someplace like a theme park and use it as a weapon. This isn’t the type of film where the killer comes in with weapons and a plan of attack but rather a seemingly regular guy that finds all the tools he needs to kill others within the park itself.

Gregory Plotkin did such an incredible job of building the fear throughout the film but still managed to add in some laughs and a lot of fun along the way. Plotkin, the writers, and the cast understood that their goal was to create something that would be highly entertaining and provide a great time but also be scary. The way that Plotkin turned Six Flags into his fright fest is pretty spectacular. I loved going on the rides and through all the mazes with Natalie, Brooke (Reign Edwards), Taylor (Bex Taylor-Klaus) and their boyfriends. I felt like I was there hanging out with all them at the park. 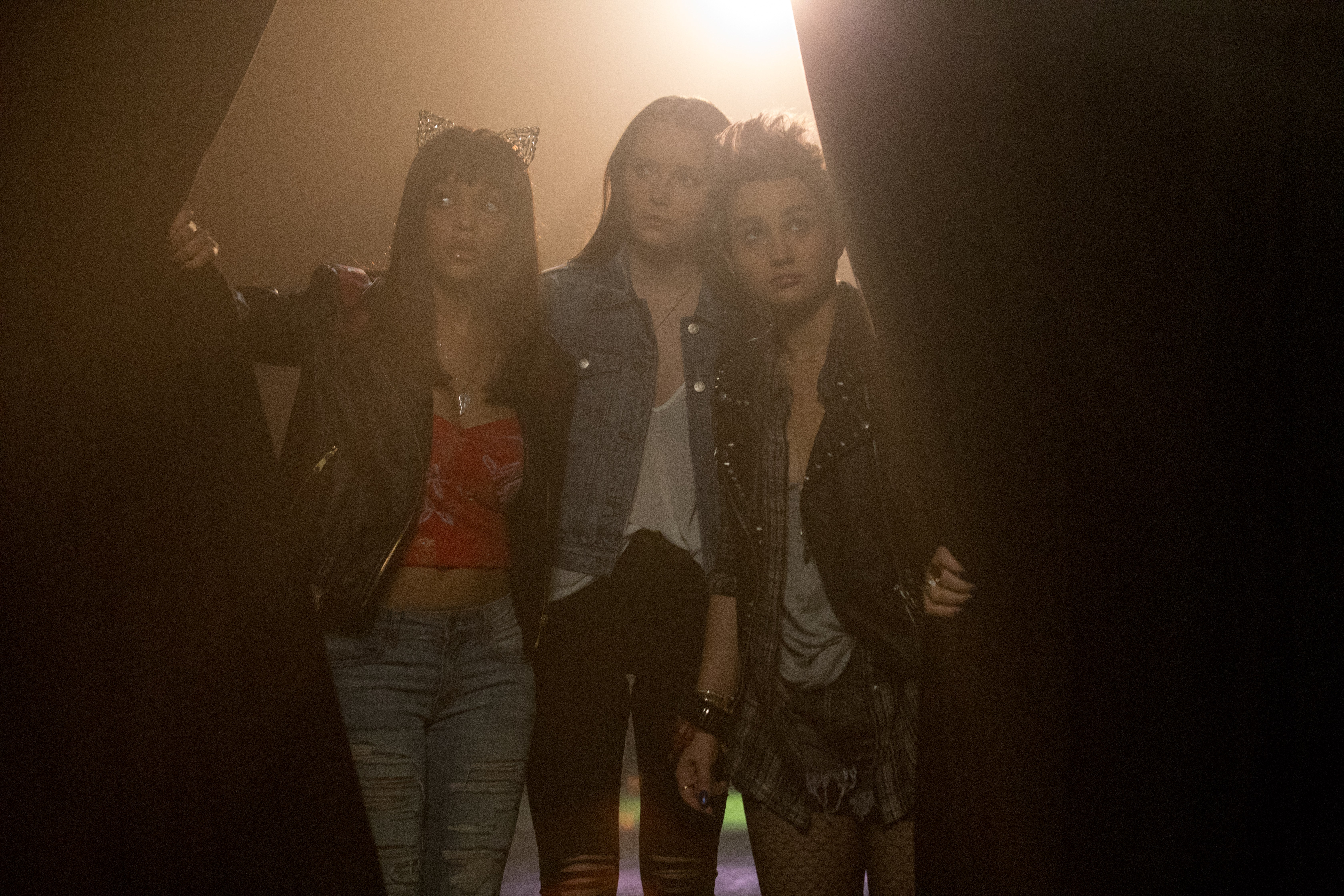 Speaking of the cast, I don’t think you could have asked for a more charismatic and likable cast. I can see how some may argue that the characters were very stereotypical but I think these are six archetypal characters perfectly fit into the story being told. Each of the actors played their parts and did so with such ease. I felt like I was watching a real group of friends hanging out and their personalities were all different. I feel like that isn’t just a nod to a lot of great horror films but an accurate representation of groups of friends in college or high school.

While the entire cast did such a great job playing each of their characters perfectly, my favorite character was Natalie played by Amy Forsyth. I feel what made Forsyth’s performance stand out was that she did such a great job playing up the whole innocent girl archetype but with a twist. As the film goes on, her character becomes such a badass when push comes to shove. Forsyth did such a great job of carrying a lot of the suspense on her shoulders and Natalie is someone who as a viewer you want to get behind and champion. I should also mention I also really enjoyed Bex Taylor-Klaus as Taylor. Yes, she was more of the plucky comedic relief, but her line delivery reminded me a lot of Brianna Hildebrand in Deadpool.

The team behind the costume and set design for this film did such a terrific job. The park rides were amazing to look at and the mazes were really scary and very well done. The design of the serial killer mask was very simple yet effective. I also really enjoyed the make-up and the practical effects in the film. There is a scene with Tony Todd dressed in this elaborate costume that is just so beautifully done. The entire film at times felt like a real-life nightmare come to life. It all felt very realistic which only added to the effectiveness of the film. 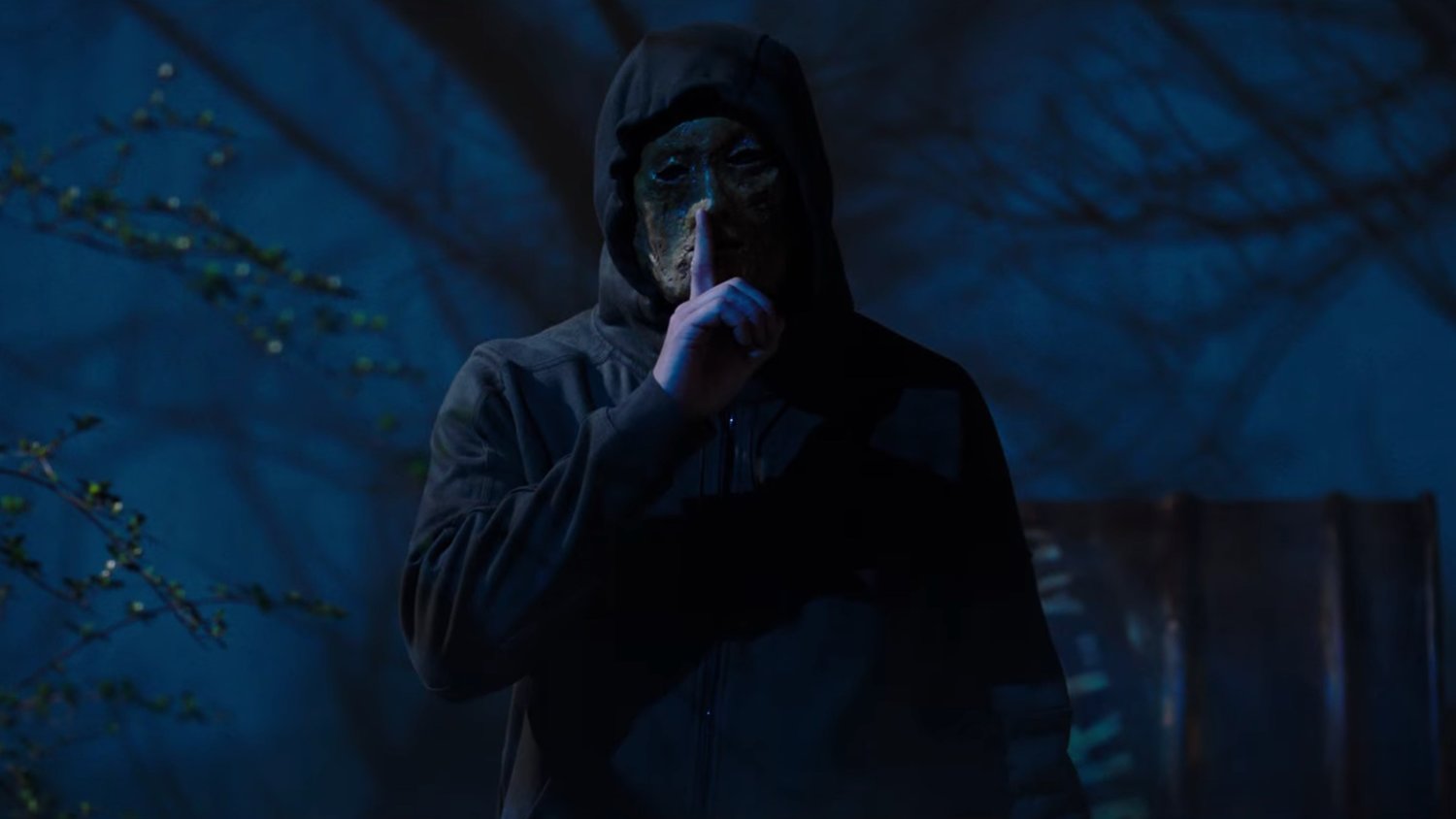 Hell Fest does play as an homage to many of the classic serial killer franchises but does this while doing its own thing. I love that this film breaks away from incorporating some of standard horror film cliches such as having a sex scene. There is no sex scene in this film which is oddly refreshing. It should also be pointed out that this is very much a female-driven slasher film as the story shows them working together to escape this park. The male characters are not portrayed as the heroes which again is very refreshing as the film does a phenomenal job celebrating strong female characters and girl-power.

I had an absolute blast with Hell Fest and can easily see this becoming its very own franchise especially with the way that the film comes to a close. Without spoiling anything, the ending is unexpected and absolutely bananas. Gregory Plotkin has definitely learned a thing or two from Jason Blum and I can see him quickly becoming the new go-to guy for horror.  Hell Fest is a damn good time at movies and one that should be seen with the biggest group of friends possible. 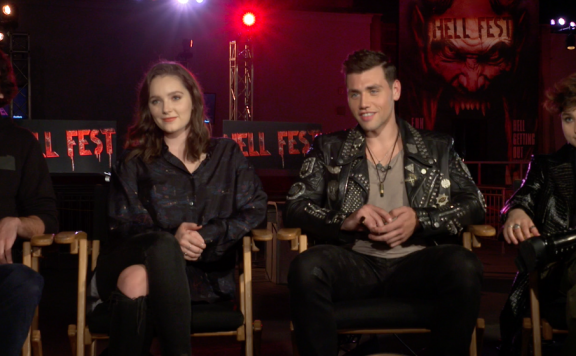