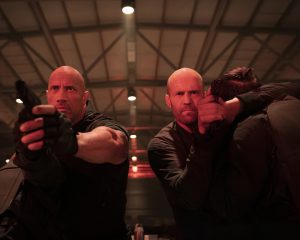 Ever since he joined the franchise in Fast Five, Dwayne Johnson has been trying to drum up interest in a Luke Hobbs spinoff. I initially thought a solo movie was a bad idea because what makes The Fast and the Furious so special is the ensemble. Hobbs hung in there for three more movies, and by The Fate of the Furious, pairing him up with Jason Statham’s Deckard Shaw proved they had great chemistry. Suddenly Hobbs & Shaw was a great idea. It also fits the theme of the franchise that both of these characters began as antagonists but grew to become members of the family.

Princeton (Idris Elba) is ETEON’s greatest achievement, a computer-enhanced covert agent. Princeton tried to steal the CT17 or Snowflake Virus, but MI-6 agent Hattie Shaw (Vanessa Kirby) beat him to it. Only to do so, she had to inject the virus in herself. The CIA recruits Hobbs and British Intelligence recruits Shaw to find her, both sides knowing they’ll be oil and water. The Shaw family keeps getting larger because Hattie is Deckard’s sister. 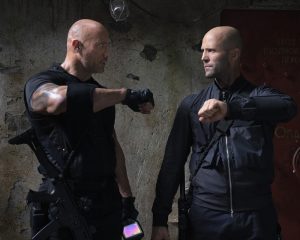 The Fast and the Furious Presents: Hobbs and Shaw picks up on the odd couple dynamic they explored in Fate. This is a familiar trope in action movies. 48 Hours, Lethal Weapon, forcing two mismatched partners to work together is a tried and true formula. Hobbs and Shaw are more like a Midnight Run or Rush Hour dynamic where they’re constantly trying to shake each other to go solo, and whenever one gets the upper hand, the other has to one-up them.

That gives Hobbs & Shaw a somewhat different tone than the Fast and the Furious movies. It still has the wild action sequences but takes more time to let the actors riff against each other. There’s less of an earnest sincerity to the drama and far less emphasis on family. Although both Hobbs and Shaw’s family play major roles in the film, Hobbs & Shaw just isn’t taking it as seriously as Dominic Toretto (Vin Diesel) does, and that works to establish their spinoff as something else. This is just a romp for Hobbs and Shaw to save the world. 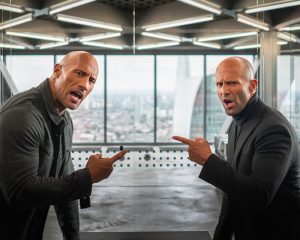 John Wick co-creator David Leitch also seems to have an action choreographer’s sense of editing the dialogue too. The film takes time for humorous character interaction, but they’re always edited with a snappy back and forth. They may have riffed for hours, but Leitch takes a fast and furious approach to those interactions. The only one that slows the movie down is a cameo appearance on an airplane. That felt too indulgent, but on the other hand, we get to see Helen Mirren riff with her on-screen son. 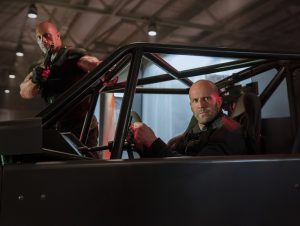 The action is of course great. Leitch directs the stars with his 87eleven action team to create some impressive battles. Hattie uses her helmet and the contents of a garbage bin against Hobbs, the premise being that Hobbs can pick up anything she hurls as if it’s a scrap. Shaw can use anything in his kitchen or shower against attackers, and later in the movie uses an army’s own vests, straps, and tasers against them. 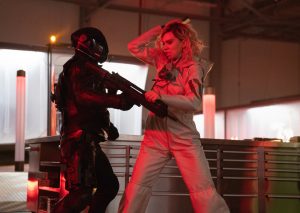 I was most impressed by Kirby and her double’s moves. They definitely show Kirby’s face doing a lot of her own fights, and then they cleverly have her don her helmet or her hair falls over her face so a trained stuntwoman can do more than they can teach an actor in preproduction. Kirby is the MVP of Hobbs & Shaw. She sells all of Hobbs and Shaw’s tomfoolery because she doesn’t have time for them. She has bigger problems, she’s vicious and elegant but also gets to be vulnerable..

Vehicular action is fast and furious too. Hobbs & Shaw found some car stunts that even the Fast and the Furious films never attempted. The philosophy remains the same, that these guys are magic when they’re in a car. Shaw uses any slanted surface as a potential ramp. There’s a fight on a moving truck while an entire factory collapses behind them. The climax is a caravan of trucks versus a helicopter. 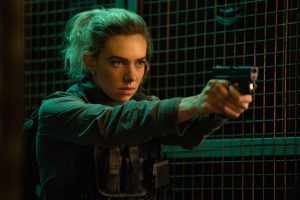 Hobbs & Shaw sets up more adventures for Hobbs at least, and a strong implication that Deckard and Hattie Shaw would join him. Here’s hoping they also return to the Fast and the Furious family, although it seems pretty clear Johnson is done with Diesel which is fine too. He did four and hopefully, Lettie, Roman, and Tej can get their own spinoffs too. 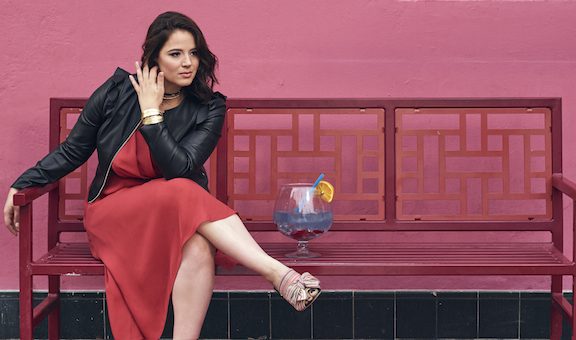