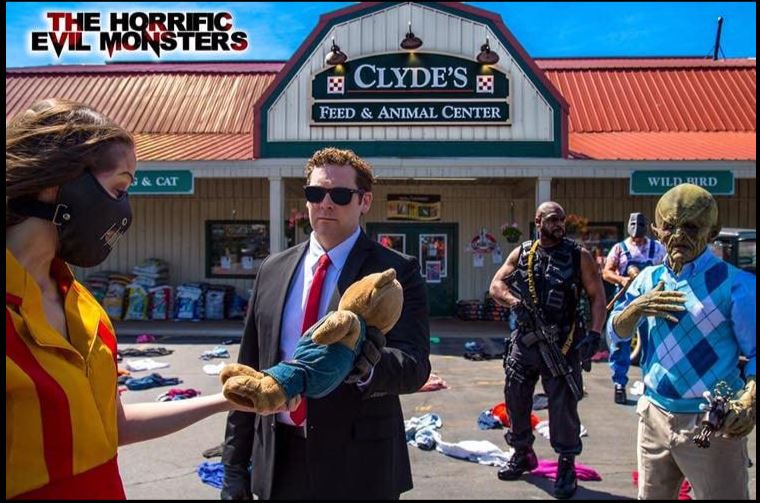 There is a new team in town that has been assembled to take on a global threat. Only this team is made up of the grotesque and the horrifying rather than of heroes. In The Horrific Evil Monsters, the earth is on the brink of a full-scale apocalypse thanks to the meddling of four gods, War, Famine, Death and Conquest. To battle these powerful foes, a secret organization assembles the worst of the worst. These are the serial killer Gore, zombie waitress Anna, the former action star Alex Creed and his partner known only as Obji (the “j” is silent). As the body count rises, these four have to learn to work together before it is too late.

The Horrific Evil Monsters is the culmination of years of work by Adam Steigert. Many of the characters you see here were featured in previous films he created. It was fun seeing these unique characters all on one stage. Steigert has created a universe with its own rules and identity. You can tell he has fun playing in it. Each character feels unique and seeing them here makes me want to go back again and watch his previous films. He makes the most out of his budget. One thing he always manages to get in his films is great talent.

There are many familiar independent film stars on screen in The Horrific Evil Monsters and each one gets a chance to show their talents. Bishop Stevens is really fun as Alex Creed. He is the only human of the group and gets some of the best lines, especially when he banters with Obji played by Will Nemi. These two have a number of fun moments and great chemistry together. Kaylee Williams is creepy as Anna. She brings the attitude with this character and really owns it. The villains are also fun to watch. Olcay a.k.a. Conquest is brought to life by Jennie Russo. This is one badass character that really feels like a threat thanks to Russo’s performance. My favorite villain performance is Gregory Blair as Famine. I also enjoyed him in Fang. He really goes all in no matter what character he is playing and Famine is no different. The rest of the cast of characters are well designed and have their own personality. On a film with a limited budget, you need strong characters and there are plenty of those here.

The special effects look great for a film of this budget. The makeup effects are well done, especially for Gore and Obji. There was real effort in here to make sure each character’s makeup was unique and could hold up on the close up shots, which they do. The cinematography in the film is decent. There are a couple of really great stand-out shots including one where we first get to see the four horsemen on earth. There is a small pacing issue with the story. The film is heavy on the dialog, and a couple of scenes did slow the film down. There is a sequence involving a kitchen show that I would have liked to be just a bit shorter. It also felt a bit rushed at the end in the editing, almost as if there were a couple of missing sequences. Possibly due to a limited budget and limited time to shoot.

The Horrific Evil Monsters has a big budget spirit and creativity. There are not really any scary moments in the film, but I found a number of scenes quite funny and loved the practical effects. Fans of Steigert’s other films will thoroughly enjoy this movie. While you do not have to see Steigert’s other films to follow what is going on, it does help in understanding some of the characters. If you are a fan of indie small budget films you will have fun with this one. If you are into more mainstream films, you may want to skip it. I really enjoy the stories being told in the world Steigert has created and hope there are more to come.