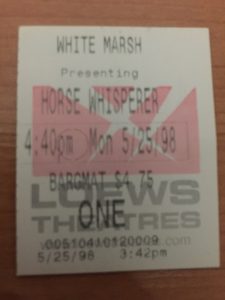 Apparently I waited two weeks to see The Horse Whisperer.

The Horse Whisperer was not a movie I expected to like. The trailer used Scarlett Johansson’s most precocious moments (“isn’t it, like, obvious?”) and my frame of reference for heartthrob Robert Redford at the time was more Up Close and Personal and Indecent Proposal than The Way We Were and Out of Africa. He had my respect as director for Quiz Show and back then I saw everything just in case. Boy, did The Horse Whisperer pay off.

This is a story about literally getting back on the horse. Grace (Scarlett Johansson) is out riding with her friend (Kate Bosworth) when the horses slip and fall into the road. A truck hits Grace and her horse Pilgrim leaving them both physically and emotionally scarred. So Grace’s mother Annie (Kristen Scott Thomas) takes Grace to legendary horse whisperer Tom Booker (Redford). While he works on calming the terrorized horse, Grace also learns to regain her confidence and Annie romances Tom, even though she’s married to Robert (Sam Neil). 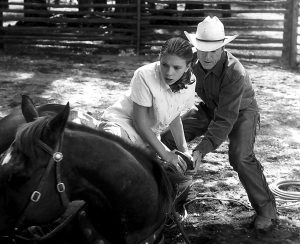 So it’s a metaphor. If you ever have a setback that makes you afraid to try again, remember Grace and Pilgrim. But also literally it was a horse accident and Grace has to learn to ride again and get Pilgrim to let her ride him.

I have to apologize to Annie for my 1998 assessment of her. I thought Annie was a terrible mother. She was obsessed with work and her own status, and she cheats on her husband. Look, I was 20 and still getting over my teenage rebellion. I see now she does the right thing when it counts. She won’t let them put Pilgrim down. It takes a no nonsense workaholic to see Pilgrim’s potential for recovery. A softer, more emotional mom might be swayed to do the humane/easier thing. 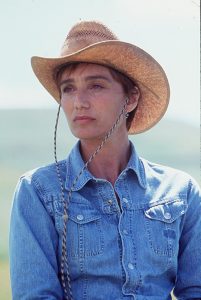 And she stays at the hospital. She may be micromanaging the staff but you have to do that with our health care system. Taking Grace to the horse whisperer is a bigger time commitment than most parents can afford, but she’d rather see her daughter made whole again emotionally, like any good parent would prioritize. She seems to recognize her tough love doesn’t work. Even if it did make her cheat on her husband, frankly the child is more important than the spouse in a family. Yeah, I said it. If my kid is in trouble and you tell me I can save her but my wife would have to cheat on me, I could live with that. 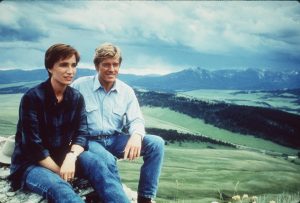 The only movie that ever got me to root for adultery was The Bridges of Madison County. I loved The Prince of Tides too but even then I didn’t let Nick Nolte off the hook for hurting his wife. I still don’t root for Annie and Tom but I accept it now. They have really adult conversations about the consequences of it too, and they don’t ultimately sleep together.

Also, Tom turns Annie down and Annie carts Grace and the horse to his ranch anyway. That takes balls. Your average parent wouldn’t do that. 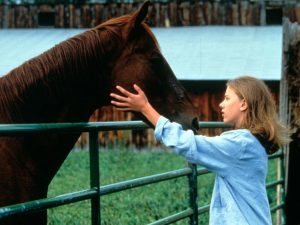 I was closer to Grace’s age in 1998 so I related more to her. Now I’m closer to Annie’s age. While I still relate to Grace’s rebelliousness, I’m now old enough to notice Annie is fully aware of her shortcomings as a parent and of Grace’s judgment. What can you do? It’s the nature of parents and kids.

Annie can’t stop talking though. I know the type of person. Always asking “What’s this? What are you doing? Why do you do that?” She can’t just wait and see the result of Tom’s methods and learn that way. City folks… 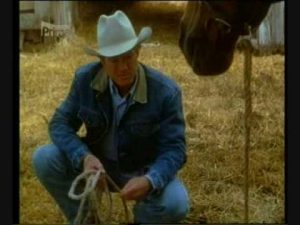 Yet Tom maintains patience even with Annie’s distractions. As director, Redford won’t rush the recovery either. He takes the time to show subtleties in taming Pilgrim and empowering Grace: giving her jobs, teaching her to drive to show her prosthetic leg works. He’s also patient asking about the accident, introducing that he needs to know about it but giving Grace time to open up on her time. 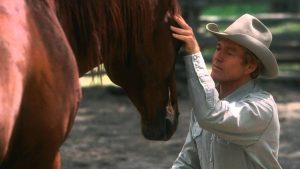 The Horse Whisperer is full of philosophical pearls. Of course the big one is “I don’t help people with horse problems. I help horses with people problems.” which the real Buck Brannaman says. There’s also “I didn’t love her because it was right. I just loved her.” Damn, he’s smooth! Seriously there are life lessons throughout and if you want more, watch the documentary Buck about Brannaman on whom the character was based. 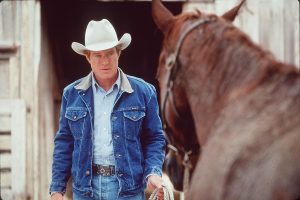 Imagine doing all these horse wrangling scenes with a real horse, and putting scar makeup on that horse every day. Today they’d CGI the horse. That final scene is so harrowing and requires a lot of acting on the horse’s part, not to diminish Johansson’s work in the pivotal scene. 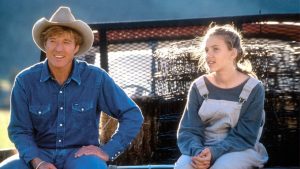 Johansson showed what a powerhouse she already was. Like Kirsten Dunst in Interview with the Vampire. Also check out Eli Roth in Annie’s magazine staff. He doesn’t even get credited. Only Office Workers 1-3 get credits. He must’ve been #4.

I liked The Horse Whisperer so much in 1998 I got the unabridged audiobook for my drive to L.A. It became a prime example of how movies are much better at streamlining narratives (and the movie is still close to 3 hours). Nicholas Evans spends what must have been pages on the truck driver’s backstory, how he’d been driving extra shifts and missing sleep. It doesn’t matter. The truck driver is a plot device. It only matters that there was an accident. We know how accidents happen. Knowing the reason for his sleep deprivation has zero impact on Grace’s story.

Sadly movies have adopted more of the overexplaining they used to have to cut for time. Not a Transformers movie can be three hours long full of backstory on Shia LaBeouf’s love life. Marvel movies know they have multiple films and crossovers so they can take time out of current movies to show things that won’t even matter until later movies. Fortunately in 1998, Redford knew enough to focus on Grace and Annie’s stories.

I was not as attuned to the privilege on display in 1998. I mean, this is a crisis that could only happen to people who own horses. It’s sort of the point, big city rich folks learn the ways of the land. And Grace was just born into it. She didn’t ask for the privilege and deserves a chance to recover. I would forgive a working family of five saying, “Don’t cry to me about your horse problems” though.

I also always thought the title was redundant. I mean if he’s hoarse, wouldn’t he already be whispering? That joke is a lot funnier when I say it out loud.