I can’t believe it’s been 10 years since The Simpsons made a movie. They had already been on the air 18 years and newer shows like South Park and Beavis and Butt-Head beat them to cinemas. Now we’re approaching season 30 with no end in sight. The Simpsons proved they could make a great movie that was not the last word in the series but reinvigorated the series for another decade and beyond. 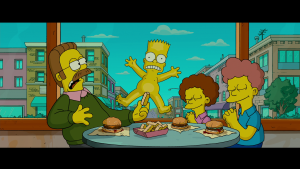 The Simpsons Movie did everything I expected a Simpsons movie to do. It satirized the idea of a TV show becoming a movie. Homer even calls us suckers for paying to see something we get for free on TV. It kept satirizing Fox, with fake promos for fake reality shows embedded in the movie. It satirized the format of movies themselves, with a fake cliffhanger. And of course it had slightly racier language and full frontal animated nudity.

What I did not expect was how The Simpsons Movie told an epic story that was more than an extended episode, how it took the family to an emotional level beyond weekly shenanigans and made us utterly invested in an absurd premise. The Simpsons writers truly adapted to the needs of a 90 minute movie while retaining their voice.

The plot is that Homer adopts a pig to save it from the slaughterhouse. However, dumping the pig’s waste in Lake Springfield makes it so environmentally toxic that the EPA encloses Springfield in a glass dome (developed at the same time, independently of Stephen King’s book Under the Dome, so we get both the scary and comedy versions of it). The Simpsons escape though and return to save Springfield from the corrupt EPA. It’s a timely environmental story but in no way dated to 2007. You’ll be able to watch it in 2070 or 2700 and still laugh, even if you have to watch it in space overlooking the scorched earth.

Every week, Homer does something that would give Marge reasonable grounds for divorce. The Simpsons Movie really establishes that this is the worst thing Homer has ever done. He’s cost them their home, endangered the planet let alone the town, and told a more fundamental lie to Marge than his usual buffoonery. A lot of that impact is due to the vocal performance by Julie Kavner. The voice cast are phenomenal week in, week out but it seems having the time to craft a performance really took them to the next level. After 18 years, you really believe this is the last straw for Marge. 10 more years of episodes prove her tolerance even stronger, but she didn’t know that in The Simpsons Movie.

By season 18 The Simpsons had already underwent writers rooms change ups. Staffers like Brad Bird and Conan O’Brien moved on to their own projects but they always managed to find new writers with a Simpsons sensibility song with their own new ideas. The Simpsons team of Matt Groening, Al Jean and James L. Brooks have said The Simpsons Movie reinvigorated them for the show, and subsequent episodes show a more ambitious sensibility like the movie. 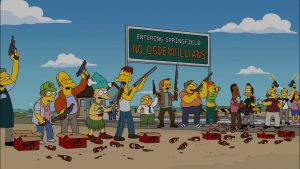 One of my all time favorite episodes, “Coming to Homerica,” told the entire immigration debate from the arrival of Ogdenville immigrants through Ogdenvillians taking jobs Springfieldians don’t want to demonizing them and building a wall to keep them out, all in 22 minutes. Smithers came out officially. Apu had an Americanized nephew commenting on his outdated stereotypical portrayal. “Steal This Episode” tackled movie piracy and franchise culture with the Radioactive Man deboot Radioactive Man Re-Rises.

One of my favorite puns ever came in a non sequitur scene. When the kids are forced to watch Dr. Dolittle, Milhouse complains the running time is 153 minutes. Nelson declares “The running time is now!” and tries to make a break for it. He’s foiled by Willie and a firehouse. I believe I have The Simpsons Movie to thank for invigorating the creators to keep pushing stories like this. 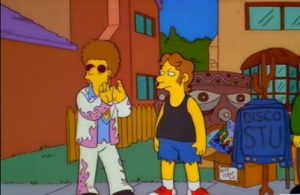 The best Simpsons jokes are brief moments that tell volumes of story and in The Simpsons Movie, you can see the writers telling expansive volumes in even briefer sight gags. On TV, the line “Disco Stu doesn’t advertise” introduces an entire character whom we understand has lived his whole life for Disco, and he since became a recurring character. In the movie, when the dome arrives and the people from the bar and the church flee to each other’s place of respite, you have to understand the safety people seek in religion, the denial for which people use alcohol, and the reasons each group would instantly turn to the other. Likewise, the Squeaky Voiced Teen ushers the movie theater during the credits and complains, “Assistant manager isn’t all it’s cracked up to be.” I relate to that one because I worked my way up to assistant manager at a movie theater, and we still had to clean the aisles.

Some of the most memorable jokes are the most absurd. People still remember the lyrics to the Spider-Pig theme song. This is just Homer holding a pig on the ceiling. I don’t even know why that’s funny but it is. That’s why The Simpsons keeps me coming back for 30 years. They know what I don’t even know I’m looking for. One of my favorites is in the episode “Bart Sells His Soul” when Bart switches the hymn music with Inna Gadda Da Vida and Reverand Lovejoy says, “Wait a minute. This sounds like rock and/or roll.” I don’t know why but the and/or cracks me up.

There will be commenters who say The Simpsons isn’t good anymore and they won’t share my enthusiasm for its continuing success. They may be responding to the way The Simpsons humor evolved in three decades, or how they themselves evolved away from this sort of humor. There are young fans now reared on the 10 seasons to come after the movie, and to them the so called Golden Ages of seasons three or four through nine seem weird. The enduring brilliance of The Simpsons is that it can be so many different things, yet consistently irreverent.

The movie was rated PG-13 “for irreverent humor throughout” which Groening called the best review they could get. I agree. Irreverent humor throughout 30+ seasons is quite an achievement. By not going extreme like South Park, The Simpsons Movie stands out from the show even more. Little things like saying “god damn” which you can’t on Fox, showing Otto smoking a bong, Homer giving double middle fingers as he jumps in the sink hole, just being as relentless an A-hole as PG-13 allows, the restraint draws attention to the subtle differences.

If The Simpsons Movie were R-rated, it would’ve been a gimmick. This is still The Simpsons just being a tad more adult. To be fair, extreme was in South Park’s character. They have since pushed the boundaries of basic cable beyond their own R-rated movie.

The movie has impacted The Simpsons on the air too. The pig, Harry Plopper, has recurred on the show. To really give you a sense of how far things come in just 10 years, Edna Krabappel is still dating Principal Skinner in the movie. She would hook up with Flanders on the show, and now it seems they have acknowledged the death of Marcia Wallace so Flanders is single again.

They didn’t stick to everything from the movie. Lisa’s boyfriend Colin has not returned, and that was a Tress MacNeille voice. She’s always around to record it, but Lisa’s stories haven’t needed her to be in a relationship. Dr. Nick inexplicably returned from death. That’s irreverent. And Ralph Wiggum is not gay, despite saying, “I like men now.” He’s Ralph. Nothing he says is consistent. I guess the squeaky voiced teen is now technically 22 since in addition to assistant manager, he says, “four years of film school for this” as he sweeps the empty theater. Maybe he was a child prodigy and graduated at 19.

Perhaps the greatest thing The Simpsons Movie did, besides being a great movie itself, was enable the show to continue indefinitely with more inspiration than ever before. They may have gone in thinking it’s time to do a movie before the show ends. Now they seem ready to do the show forever.