Hunger Games: Mockingjay Part 2 Review by Ashley Menzel: the End of a Revolution

It is finally over. After years of build up, the Hunger Games Trilogy has finally come to an end with Hunger Games: Mockingjay Part 2. The film opens with Katniss (Jennifer Lawrence) in the hospital coping with her injuries sustained by Peeta’s (Josh Hutcherson) attack at the end of Mockingjay Part 1. The plot of this film is getting Katniss to President Snow’s (Donald Sutherland) mansion and her killing him. She manipulates her squad into believing that is a mission from President Coin, when she is really acting on her own. Along the way, the squad that Katniss is a part of is ambushed by booby traps called pods, which President Snow has set up to kill them. The squad consists of Katniss, Peeta, Gale (Liam Hemsworth), Finnick Odair (Sam Claflin), Cressida (Natalie Dormer), Boggs (Mahershala Ali), Castor (Wes Chatham), Pollux (Elden Henson), Messalla (Evan Ross), the Leeg Twins ( Misty Ormiston and Kim Ormiston) and Commander Paylor (Patina Miller). 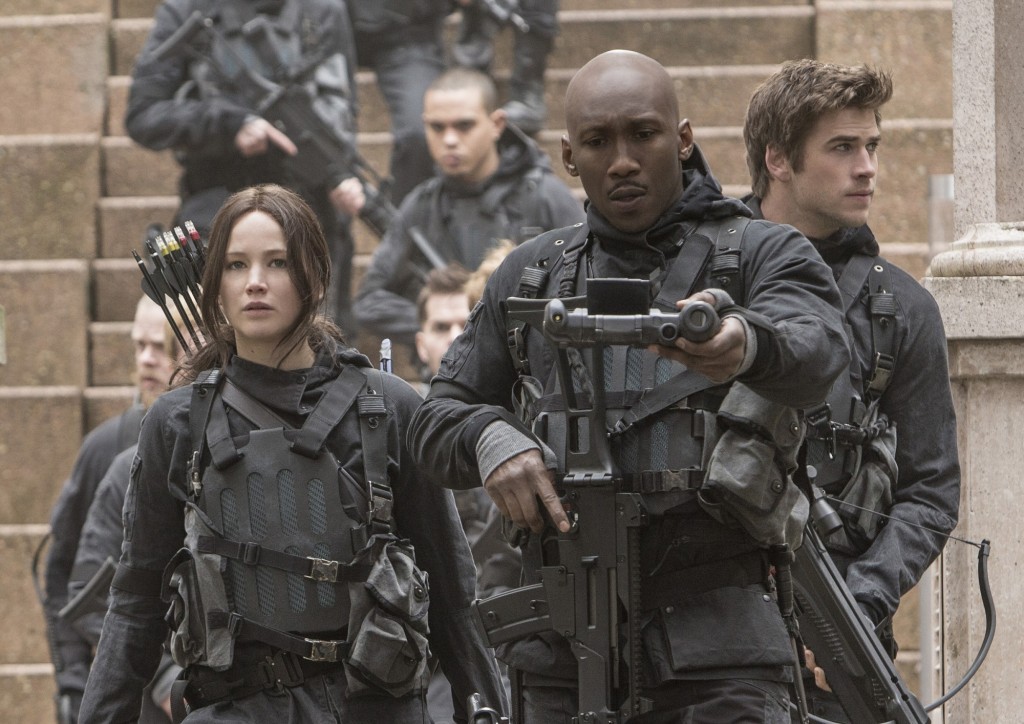 For much of the journey Katniss is struggling with her feelings for Peeta. Peeta is still a mess from his time at the Capitol and has trouble distinguishing reality from the brainwashing he experienced. He even attacks and kills one of the members of the squad during a pod explosion. The mission really isn’t about much more than revenge, so it is pretty simplistic, which allows for a focus on the visual effects and the characters’ motivation. Haymitch (Woody Harrelson) and Plutarch (Philip Seymour Hoffman) take a back seat in this film, more than they had in previous films. It is to be noted that the scenes they had to do with Plutarch after the death of Philip Seymour Hoffman are quite obvious and do stand out visually. I know many people are wondering about that, so I felt I should add it in here. Other characters that make an appearance but don’t really make much of an impact are Katniss’ sister Primrose Everdeen (Willow Shields) and their mother (Paula Malcomson). Their presence in the film is necessary but not noteworthy.

What makes the film most intriguing are the visual effects and the battle scenes. The film is shot very beautifully with really detailed battle and fight scenes. The one scene in particular where the squad sets off a pod that has black goo fill up a courtyard is particularly amazing. The black goo is horrific because once it hits human flesh, it turns into these sharp razor blades that pierce through the body and suspend it in the air as if to put it on display for others. It is truly gruesome but visually amazing. 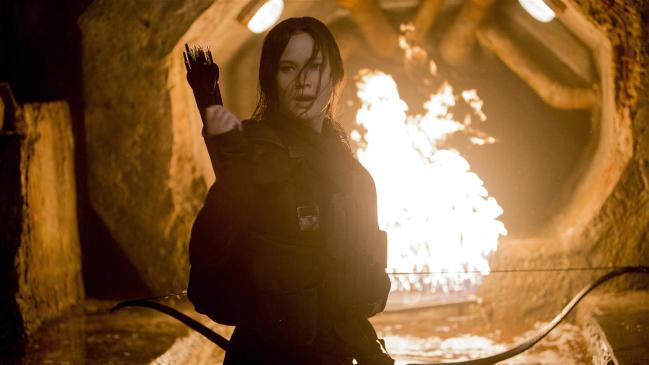 The battle scenes in this film are superior to all the other films, with the exception of Catching Fire. Katniss’ battle scenes are really engaging and she has a level of intensity and vigor that matches the mission for this film. I just wish that the emotional scenes packed the same intensity. Another scene I found to be incredibly well done is the scene with the Mutts in the sewers. President Snow discovers that the squad is now in the sewers to avoid the pods and he releases the mutated human Mutts to attack them. They are visually disturbing with translucent skin and razor sharp teeth. They attack the squad and kill a few members, particularly the kind hearted Finnick Odair. What makes that scene great in my eyes is that because it is shot in such a close quartered area, the visuals had to be impeccable, and they did such great work in making the Mutts so realistic and horrifying.

The questions that this film raises I think are really important questions to consider. We question the motivation of governments and leaders. President Coin (Julianne Moore) is such an interesting character because she appears to want a free election and a country run by a democracy, but her actions prove otherwise. The film really gets the audience to question the motivation behind political leaders and the horrible things they do to gain power and respect. The film is interesting because for the first time, it shows President Snow as not such an evil man. There are scenes that really demonstrate the horrors of war, which are really impactful and heartbreaking. Another really great point that is brought up that centers on the idea of punishment for the Capitol Loyalists. As punishment, President Coin proposes a Hunger Games using the children of the Capitol Loyalists. This is another great commentary on our society and that we never learn from our mistakes or our history. The group even has a vote on it and in the scene Beetee (Jeffrey Wright) says, “we need to stop treating each other like enemies.” 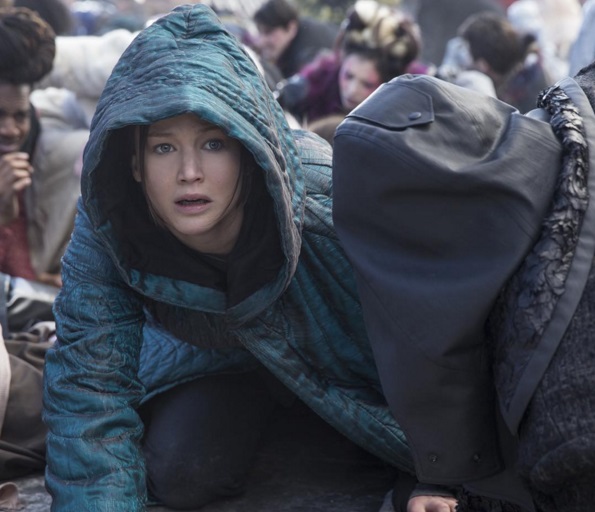 The costumes in this film, unlike the other films were not as dazzling or put on display, but because the story didn’t call for it. We didn’t have a scene for the Hunger Games where Katniss and Peeta needed to put on a show or spectacle. What we did get were very intricate but subdued designs. Effie Trinket’s (Elizabeth Banks) costumes were beautiful and meticulous as usual, even down to her eyelash design. I really appreciated the level of detail they put into the costumes, even though most were not extravagant. There is a scene where Gale and Katniss have to walk in a crowd with other people from the Capitol and the costumes there are just fabulous. Some of them are so intricately designed, colorful and beautiful, while some are crazy and outlandish, but still amazing. They are in such a stark contrast to the darkness of war.

Something to be noted for this film is the score. I rarely note that a score was impactful in films like this, but I think it really enhanced some scenes and added to the dramatic visuals in those scenes. In one scene, it had an epic piece playing with stunning visuals of the Capitol and it was one of those scenes where I felt extremely invested in the film and the characters. 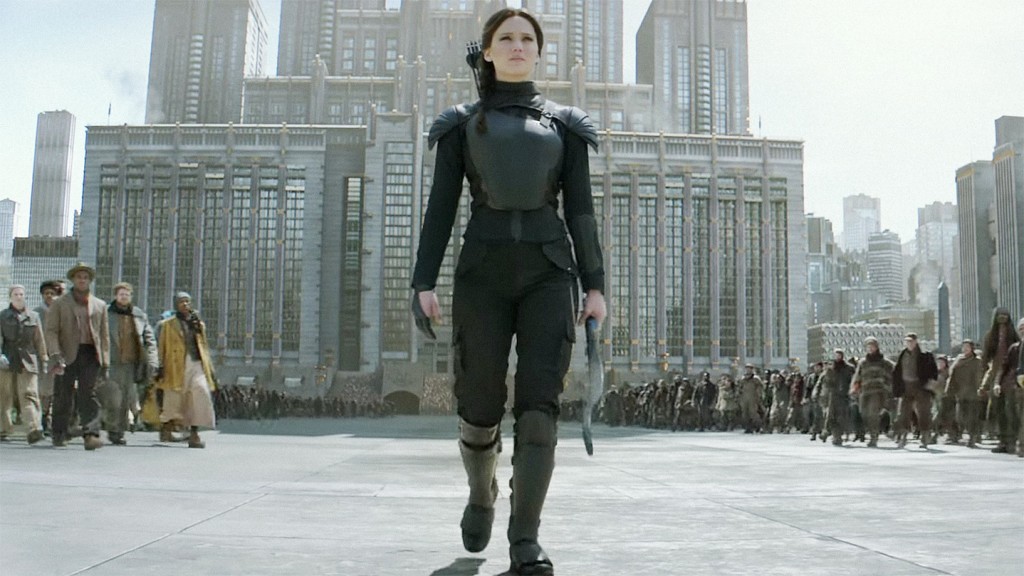 Overall, I think the film was quite aesthetically pleasing but I felt the human connection factor to be lacking. In scenes that should have been emotionally riveting, destructive and/ or rousing, I felt a sense of disconnect. I don’t know if it was the flat affect of Katniss or the emotional manipulation, but I did not feel a connection that I think would have serious given the film a much needed boost for me. Fans of the book will likely be pleased with the adaptation. I think it is a solid end to the trilogy and ties everything nicely with a bow.