Mary is a struggling writer who moves back to her suburban hometown when her husband’s employer relocates him. She has ventured ahead of the rest of the family to get the house prepared for them to live in and hopes the time alone will give her the inspirational spark she needs for her writing. She soon finds herself distracted by her nosey neighbors, an attractive young man, and the very creepy ice cream truck driving around the neighborhood. As Mary’s urge to relive her youth increases, so does the danger that lurks in the form of the ice cream truck. The special flavor of the day is death.

I knew very little about the movie before watching it. Judging by the poster, I had guessed it was going to be Mary against the Ice Cream Truck Man as he torments her and takes out her neighbors. While that is an element, I was surprised that the film was also an exploration into the mind of Mary. Director/writer Megan Freels Johnston could have easily given us a vanilla slasher film but instead brought a whole sundae of flavors to the table with this horror movie.

The casting of Deanna Russo as Mary was a great choice. Russo did amazing job from her facial expressions to dialog delivery to physical mannerisms. It all helped to convey the feeling of a grown woman struggling between staying the person she is today and reverting to the younger version of herself that she used to be.  Part of this struggle is demonstrated in resisting the flirtatious advances from Max, played by John Redlinger. The scenes between these two characters hummed with sexual tension.

I loved the old style ice cream truck that drives around the neighborhood. The creepy factor was amplified by the performance of Emil Johnsen as The Ice Cream Man. He is a calm sort of character who believes in the purity of things. When he sees someone he feels is tainting the good suburb he scoops them up and kills them in ice cream inspired ways.

The ice cream truck reminded me a bit of the shark in Jaws. You would hear the truck’s music, which was just slightly out of tune, and then see the truck drive by like it was on the prowl. The fact that we are not continuously following the Ice Cream Truck helped keep it mysterious. You never knew when it would show up or what to expect. The deaths are brutal and gory with some fantastic practical effects. It will make you think twice about going up to an ice cream truck for a tasty treat. 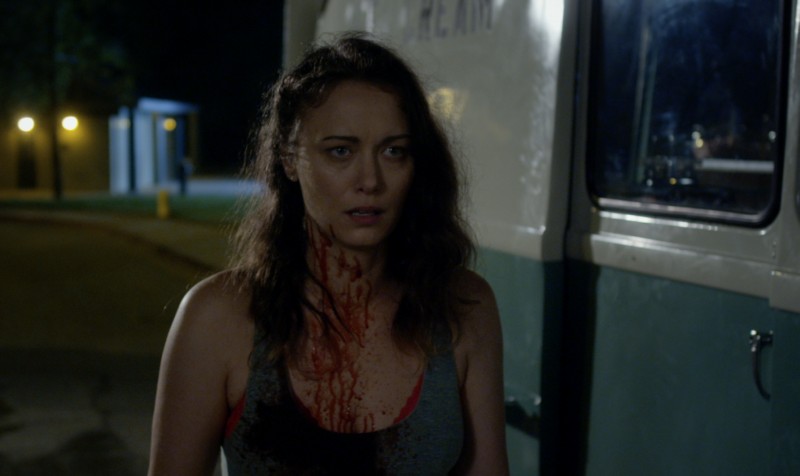 The dialog between the characters sounded natural. While some of the characters were the embodiment of suburban cliches, i.e. the nosy neighbor, the gossip, the judgemental one, etc. their conversations seemed realistic and provided some humorous moments. I liked the nosy neighbor who was always working on her flowers or the hedges between Mary’s yard and hers.

Ice Cream Truck had a well-crafted and surprising ending. It may be confusing at first but when you figure it out, you’ll smile. For those looking for a hardcore, straight up slasher flick involving ice cream, you may be disappointed with Ice Cream Truck. But if you are looking for a smart, subtly sweet film covered in a dark horror coating then this one is for you. Ice Cream Truck drives into select theaters and V.O.D. August 18th.