The found-footage genre has become the go-to for many independent filmmakers. It is also the genre that I put under the most scrutiny. There is only so much you can do with found-footage and I have seen what other types of horror films can do with the same size budget, and those other types normally do it better. When I first heard of “Inner Demons” I admit I rolled my eyes thinking, “Not another found-footage demonic possession film.” Then I saw the trailer and thought the movie showed promise. When I saw the movie I was pleasantly surprised.  Very pleasantly surprised.

“Inner Demons” follows the crew of an Intervention reality TV show. They are working on an a episode about a straight-A student-turned-junkie and her family.  As they follow sixteen year old Carson from homelife to rehab, she begins to show signs that her addiction may be something more. She may, in fact, be possessed by a demon.

Director Seth Grossman (Butterfly Effect 3, $50K and a Call Girl) and writer Glenn Gers (Mad Money, Fracture)  bring us a story that is as much a statement about the evils of drug addiction as it is about demonic possession. The parallels they present between the two are uncanny, from the religious intervention to the blurred lines between someone who is behaving like an addict and someone who is possessed.  I thought this idea was brought across very well in the screenplay. The premise pulled me into the story and the performance by Lara Vosburgh kept me there.

Lara Vosburgh plays Carson Morris in just the way you want this character to be played. From her gestures and her demeanor, you can tell there is something not right with her outside of the drug problem. She can play the innocent and vulnerable teen, then at a drop of a hat be a very frightening individual. You can feel her inner struggle between wanting to do what her parents want her to do and holding back her “evil thoughts”.  The supporting cast around Lara also do well. When we are introduced to the parents you can tell there is more to the mom and dad then what we are being shown. The callous camera man, Tim, who will do anything to dig up dirt on the girl, is balanced out by the young new camera man to the crew Jason, played by Morgan McClellan (Secret Lives of Dorks).  I really enjoyed the chemistry between Morgan and Lara when we see them together.  McClellan’s Jason wants to help Carson even though his job is only to observe. There is a genuine believability to the characters which helps keep the viewer interested.

What I also enjoyed about “Inner Demons” is that it did not rely solely on jump scares. So many of the found-footage films seem to fall back to the music-stop-something-is-going-to-jump AHHH!”  scares. It always feels lazy to me. This was not the case in “Inner Demons”. While there are a few jump scares, there are also subtle scares like changing the color of the eyes, or camera tricks where you see something out of the corner of your eye. These techniques help set up the creepy atmosphere that surrounds Carson. This film will make the hairs on the back of your neck stand up. Having the movie told from the perspective of the TV crew means we have far less shaky cam than usual. I would say this is one of the few found-footage films where I never was distracted by the camera work. That is not to say it is a perfect film.

While I did enjoy the fact that the audience knew the truth about Carson’s possession before the family did, I felt that it was revealed a bit early. Then there were a number of spots in the film where the dialog felt a little too staged for my tastes but it was not bad enough to ruin the scene for me. In a found footage film, the audience is made aware of where each shot is coming from like a security camera or TV Camera or even a phone. Unfortunately there are a number of shots in these types of films where the source of the footage is unknown. This movie has a few of these moments near the end of the film that were noticeable but not distracting. “Inner Demons” had a strong final act. While I had most of the ending figured out, there was a part in the finale that caught me off guard in a good way. It was more plausible and surprising than the end of “The Last Exorcism” or “The Devil Inside”. I always like when a film surprises me.

“Inner Demons” is a scary, creepy found-footage horror film done right.  Do not let previous demonic possession found-footage films deter you from seeing this movie. For someone who normally does not care for this genre, I found myself entertained, creeped out, and surprised. The believable performances, well thought out premise and refined use of standard found-footage tropes makes Inner Demons stand out among other films of this type. I gave it 4 stubs.

“Inner Demons” opens in select theaters and on VOD on October 3rd. 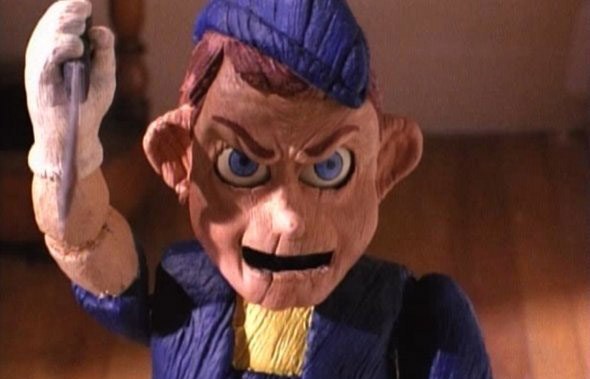 The found-footage genre has become the go-to for many independent filmmakers. It is also the genre that I put under the most scrutiny. There is only so much you can do with found-footage and I have seen what other types of horror films ca...
0
Average User Rating
0 votes
Please sign in to rate.