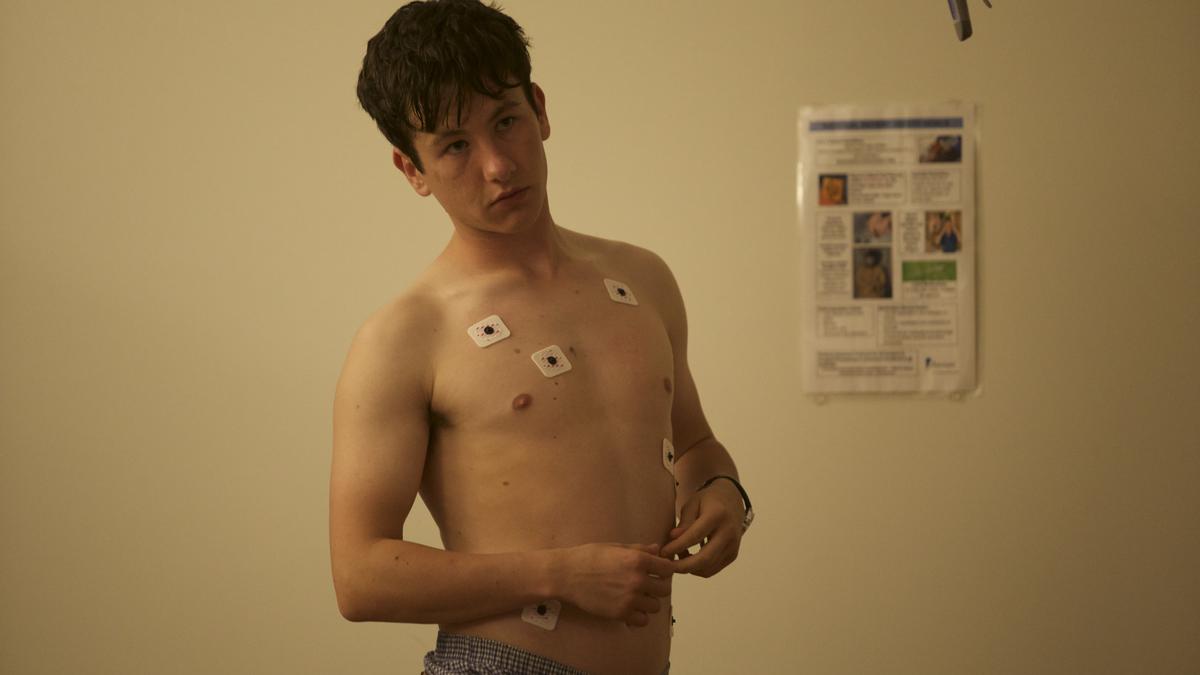 Interview: Barry Keoghan Talks ‘The Killing of a Sacred Deer‘

Writer/director Yorgis Lanthimos, who gave us the utterly bizarre and hilarious The Lobster, has created something much darker with The Killing of a Sacred Deer – a drama that is as weird and head-scratching as it is riveting.

The premise sounds much like an extended episode of the Twilight Zone. It revolves around Steven Murphy (Colin Farrell), a heart surgeon with a thriving career and a lovely life with wife Anna (Nicole Kidman) and two children (Raffey Cassidy and Sunny Suljic). Steven also has a very odd relationship with a teenage boy named Martin (Barry Keoghan), who Steven seemingly has taken under his wing after Martin’s father died while on Steven’s operating table. But when his children began to fall ill with mysterious ailments, the good doctor is suddenly faced with an unthinkable dilemma as his connection with Martin turns threatening – and quite disturbing. It’s a film that cements Lanthimos as an innovative filmmaker whose unique style thrives on pushing boundaries.

We Live Entertainment sat down for an exclusive chat with Barry Keoghan, who also was just seen in Christopher Nolan’s WWII drama Dunkirk, co-starring with Mark Rylance and Cillian Murphy. The Irish actor talked to us about his “freaky” character in Killing of a Sacred Deer, along with how he interpreted the film, what it’s like on a Yorgis Lanthimos set and much more.

What are some of the reactions you’ve been getting? Like, “Oh my God. That was the one of the most brilliant and messed up things I’ve ever seen in my life”?

Barry Keoghan: Yeah, there’s always a breath before, “Well uh…” I love that, though. You know it’s gonna be one of those movies before you see it. Yorgos [Lanthimos] movies, like The Lobster. Or you know it’s going to be up for all different reactions. I’m down for that. I want to continue to work that way. I want to be in movies that tackle and challenge, and just are out there and unique. I want to be in those kinds of movies.

Where did Martin come from?

Barry Keoghan: I don’t know where he came from. Freaks me out a little, and my girlfriend freaks out as well. I can turn that creep mode on. This was the most refreshing [films] I’ve worked on in terms of leaving the character behind. Because I didn’t come into this with all this emotion and all of this perceived feelings, as you do with a normal film. You go in, you ask questions and this one was pretty just — know your lines and just say them. Let it all go on in here. The dialogue takes care of the rest. So, it was pretty easy and refreshing and nice. When you’re watching Yorgos’ previous films, that’s his language, that’s his rhythms. You kinda take from that and you kinda go in with that. He never asks you to, “Oh can you deadpan it? Or can you play it flat?” he never asks any of that. His directions are pretty simple and precise.

Did you ever find it difficult not to emote?

Keoghan: Yeah, because you tend to show emotion as an actor. We’re drama queens sometimes so, it was tough. My main problem was laughing. I kept laughing because I was like, “This is so funny.” I kept laughing, whereas Colin [Farrell] was useful because he had a film with [Lanthimos] already, but I kept breaking, so that was my main [difficulty].

One of my favorite scenes is when you finally explain the real gist of what’s happening, very blunt and very quick.

Keoghan: It’s like the less attachment you have to that, the more of an impact it will have. You know?Because we do, in the real world, build these things up like, “Let me tell you how this is going, what’s happened.” Whereas if I just spit it out to you like, “Buhuhah” and then say, “Now I’ve got to get to class.” What the fuck is going wrong with that kid? Something messed up in his head. So yeah, I did enjoy that scene.

What is your interpretation of the film as a whole?

Keoghan: An experiment. That’s what I thought how it was. I was like, “This is an experiment.” This is like saying, “Do we need actors in the future?”

Really? Why would you think that?

Keoghan: Because it’s like you’re going in there and you’re not really acting. Well, you are, you’re internalizing everything to the max. It’s all going on here, but it’s basically stripping everything you say away emotionally. It felt like that to me a little, which I liked. I really did. I could go home and have a pizza. I could go home and it didn’t stick with me. As dark as a film it is, it’s like you would think, “Oh, that must’ve really messed with your head afterward.” It didn’t. Maybe that’s not a good sign.

Without giving anything away, what’s your take on the ending then?

Keoghan: It’s like now we’re 1-1, we’re equal. But if they want to keep playing, I’ll play. That kind of thing.

Do you think of it as being sort of sinister?

Keoghan: Yeah, I think so. I think he’s a messed up a little, tormented, a demon child-man. I don’t know what to think of him. It’s like he’s a god. We don’t know whether it was superpowers that he has. It was never explained either on set, which is nice. It’s nice to have that thing of mystery of, “What is it?” I’d like to think of him as a god. A devil’s angel. Because there is parts of him as well that’s like, “Aww, he’s lost his father,” and then you’re like, “Oh fuck! He’s actually much cleverer than we thought.” And that was a nice balance to play with as well at the start. Because you don’t know what’s going on at the start. You’re like, “Why is this man hanging with this kid?” It’s a weird sexual tension as well there. In the script originally, there was a kiss. I asked Steven at the start, “Can I kiss you?” And he says, “Yes.” And I kiss him on the cheek, but Yorgos took that out. There was that weird thing, and then it’s explained why. But you feel for this lad a little, like at the start.

What’s the atmosphere like on a Yorgos Lanthimos set?

Keoghan: Enjoyable. It was very fun. Like a family set. Colin, Nicole, very motherly and fatherly. The kids were good and, yeah it was just nice. Like as dark and weird and intense film it is, it was very fun, enjoyable set. [Lanthimos] has his own rhythm and language and everything like that, so he is like, a master. But yeah, it definitely felt like a different world. I mean at the same time, it did, like he placed us in a lot of like, the hospital and the house a lot of real places. There were no sets or it was just all on location. It was nice.

You’ve worked with some wonderful actors. Did you receive any tips from them?

Keoghan: I mean, I’ll always say this with even working with Mark Rylance and Cillian Murphy and all these lads, they never give you advice. You just watch and learn from them. You watch their mannerisms and how they talk to people on set, and how they treat everyone the exact same way. How professional they are how they know how to speak to, you know these are things I’ve watched and learned from them.

Colin was always bringing good energy to set always. I hadn’t seen a day where he was down or anything. Always showing up in the morning. Greeting everyone, making the day just good. It was nice. Nicole [Kidman], was the same! What I learned from her was that she was just so focused. An actress of her caliber, it’s like, it’s just nice to see that she’s still this focused, and wanting to work with these kinds of filmmakers and stuff like that.

Mark is a very observant person. He just watches, I think he’s watching for what the younger ones are bringing. He’s just interested in you as a person. He just looks at you. It’s beautiful to watch him just look at things and just, he’s great.

Keoghan: Yeah, I could hear, you know? My hearing came back when I went to Killing of a Sacred Deer. [laughs] No, it was great. I mean, working with two of those filmmakers is a dream, within the space of a few months. The directors are very similar. Precise and just geniuses, the worlds they create. [With Christopher Nolan] You have Inception and [with Lanthimos] the likes of The Lobster and this, and they’re two, they’re both visionaries.

What other directors would you love to work with?

Keoghan: I like Paul Thomas Anderson, Jeff Nichols, these lads. The Safdie Brothers too. I’ve recently seen Good Time and loved it. And Barry Jenkins. I mean I have a list of directors. I really, literally I do on my phone. I have a list of them. Yeah, I want to work with them all. But yeah, I want to work with these filmmakers who are completely different to each other. But similar, again, as I said, just geniuses in their own worlds, but different kind of, just totally different to each other.

Do you have any aspirations to make movies yourself?

Keoghan: I do. Yorgos got me this camera when we wrapped [a Nikon camera]. I carry it around with me. I snap a lot of pictures on film. At the minute we’re trying to figure out what’s up with the lighting. It’s proper old, yeah. There’s the, yeah you have to roll the film in. I snap away, and you look on my Instagram or wherever, and I’m really interested in all this stuff.

Do you have a story in your head that you want to tell?

Keoghan: Billy the Kid. A real one. Inside Billy’s head though, you know? Because we see him from this, the entertaining side of, he was the charmer, he was the best gunslinger or whatever, but we don’t really know what was going on inside that head. What was he like behind doors? You know having killed that many people, you can’t be normal. Was it voices? So this is something I’m actually looking into, is Billy the Kid.

That would be awesome! You should talk to Colin because he got his start playing Jesse James [in 2001’s American Outlaws].

If you could tell the audience one thing about this movie, what would you want to tell them?

Keoghan: Go in with an open mind. And leave it all in the cinema. Just leave it all there, don’t hold anything against me. Don’t run at me with a baseball bat or whatever or, you know?

The Killing of a Sacred Deer is now playing in theaters 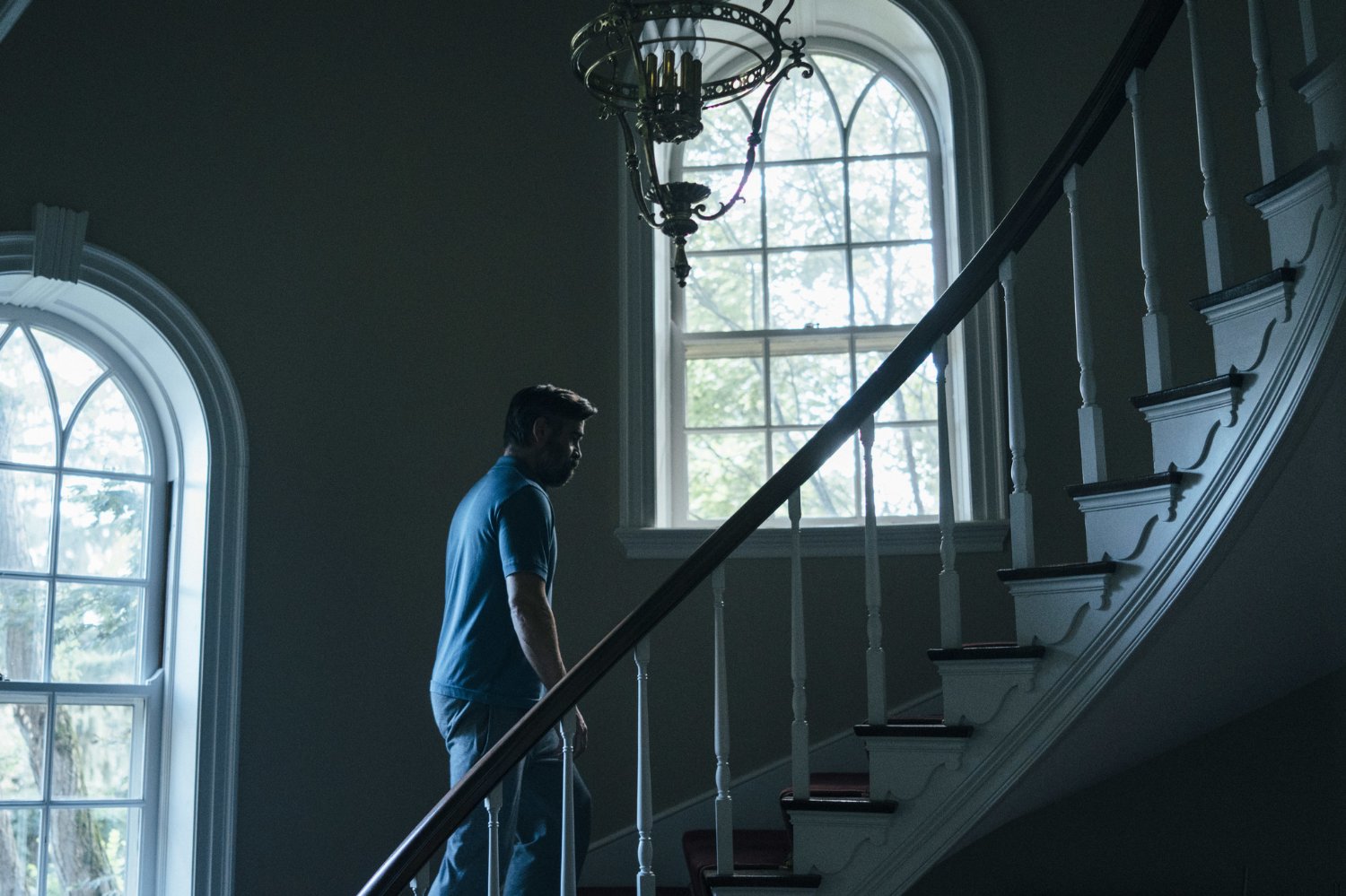 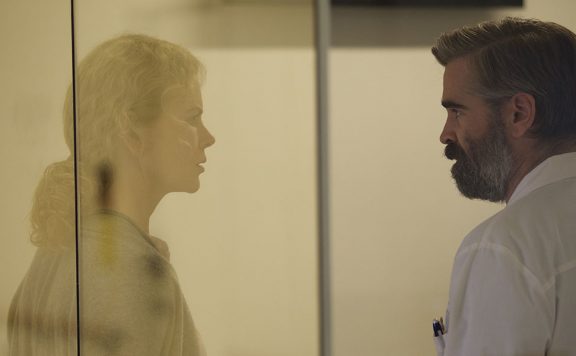