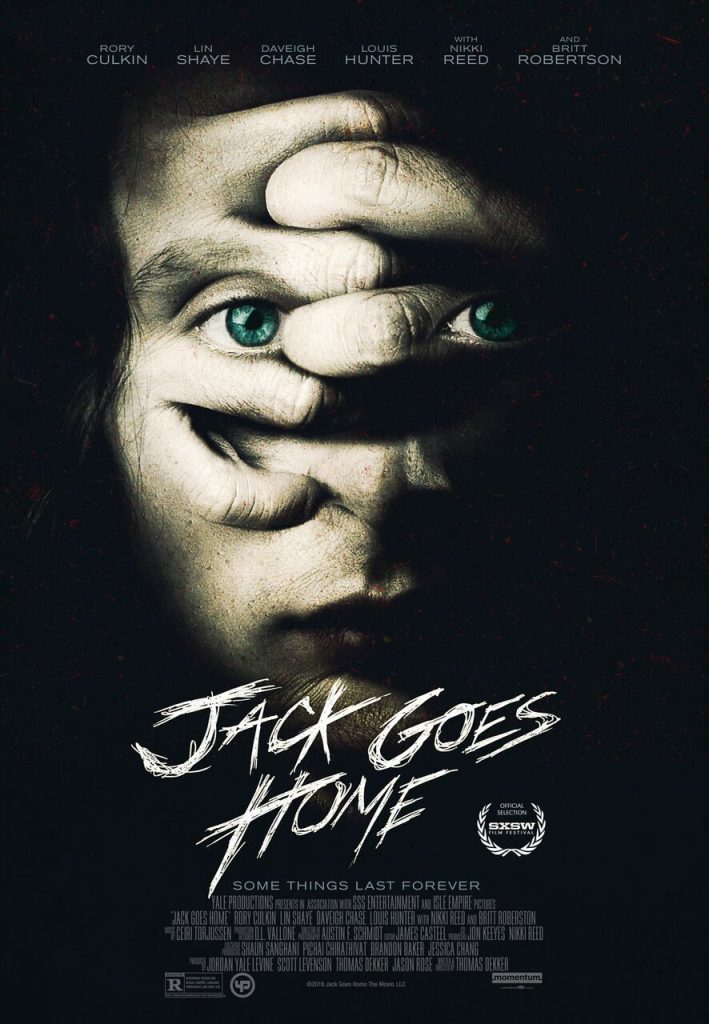 Jack Goes Home tells the haunting story of Jack and his return home after tragedy struck and his parents were involved in a car accident. The film involves Jack (Rory Culkin), his mother, Teresa (Lin Shaye) and his best friend, Shanda (Daveigh Chase) as they handle this family tragedy. As Jack spends more and more time in his childhood home, and with his mother, he is haunted more and more by his past. Instead of confiding in his friend, he shuts her out and further descends into insanity. We were lucky enough to see this film at the Midnight screening at SXSW, and it sure did leave an impression.

The film is a visual masterpiece with outstanding cinematography. Each shot is masterfully crafted to convey a very specific tone and atmosphere. The music used in the film is used with skill and precision to sustain this perfect atmosphere in which you are totally engrossed.

The performances are raw and incredibly powerful. These are some of the best performances I’ve ever seen in a horror film. Rory Culkin is mesmerizing as Jack. The range of emotions in the character are demanding, and Culkin rises to the challenge. His descent into insanity and uncovering the secrets of his past show not only in his character’s actions but the raw and unbridled expressions on his face. There is a scene in particular where Jack and Teresa have a heated argument, and the tension is palpable. It leaves you totally stunned. Lin Shaye is absolutely horrifying as Teresa. She is unhinged and emotionally volatile, striking fear in the hearts of every movie goer.

The film is so layered and nuanced that there is something for everyone in this film. It tells the story of a son, about to become a father, while coping with a relationship with his mother. It shows a son discovering more about his past as he learns more about who he is and the emotional struggles that go with it. In between those moments, we are also given sequences of hallucinations or delusions, blurring the lines between reality. While it is by far, not an easy film to watch due to dark themes of depression and sexuality, it is worth the watch. Thomas Dekker has put a great deal into this film, and his love for it shows.

Jack Goes Home is incredibly moving and emotional while scaring the pants off the audience. Rory Culkin is a force to be reckoned with as he helps weave this incredibly horrifying tale of family, loss, secrets, and lies.

JACK GOES HOME: IN CINEMAS AND ON VOD OCTOBER 14TH!

"Jack Goes Home" Review Jack Goes Home tells the haunting story of Jack and his return home after tragedy struck and his parents were involved in a car accident. The film involves Jack (Rory Culkin), his mother, Teresa (Lin Shaye) and his...
0
Average User Rating
0 votes
Please sign in to rate.