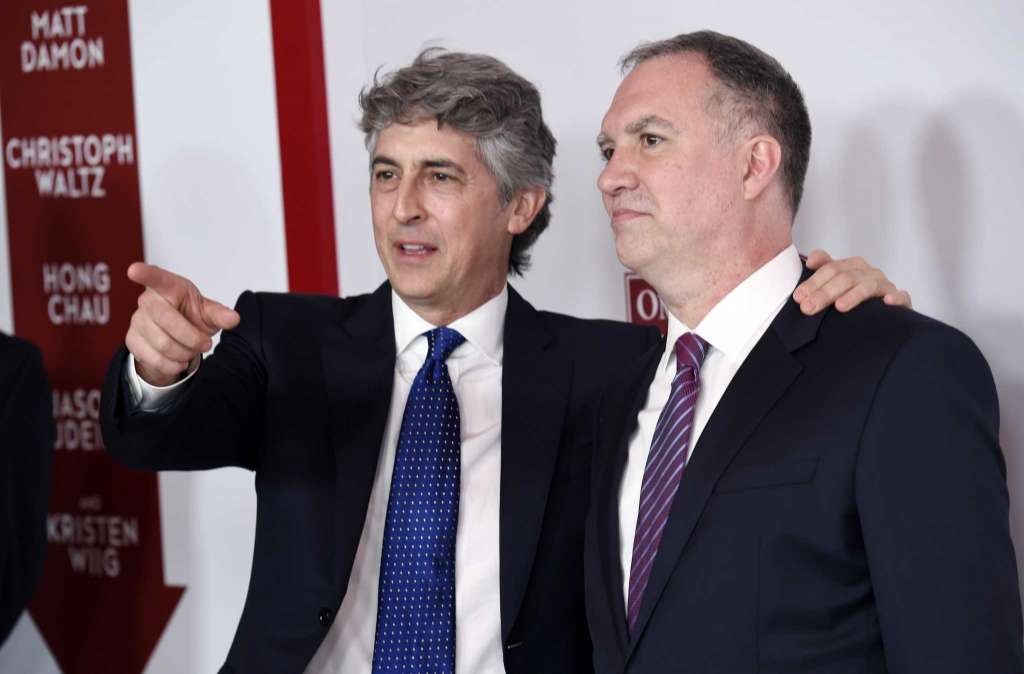 I wasn’t exactly a huge fan of Alexander Payne’s latest film, Downsizing but I decided to attend the press day for the film regardless. While I think the film is easily one of the biggest disappointments of the year, I was still very curious to sit down and talk about the film with Payne or one of the people who brought the film to life. I was given the opportunity to sit down with Jim Taylor for a ten minute interview where we were able to be incredibly candid with one another as I asked Taylor a ton of questions about the film and the reactions that the film has received from various reviewers and on social media.

Scott Menzel: I’ve been a big fan of yours since the very beginning. You and Alexander wrote films like Citizen Ruth and Sideways. They’re are great films. However, I’m very interested in this film because I know this was supposed to happen right after Sideways. What the heck happened? What took so long?

Jim Taylor: A bunch of different things, but there was sort of the first phase, which was getting down to business. Writing the script. Alexander went through a divorce. But that impacted us that much, although I think he was distracting. Because it’s an original idea and it’s an idea that could’ve gone in so many different directions, and we were sort of wanting to service this big kind of idea, I think writing it first and getting something that was ready to shoot, took us a long time. Took us a couple of years at least. Than trying to get it financed when it’s so expensive and it was longer even then and more expensive because of the special digital effects and stuff. So, Alexander and I  had been developing this script with other writers at our company. He made The Descendants. I had a kid. And even at the very end, after nine years, then we were set up ready to go, and then it fell through. Alexander’s brother died, who he dedicated this film too, so in a way, thank God, we weren’t shooting when that happened. Anyway, it just adds up. I don’t think it’s that rare, as much as we think, “Geez. It took 10 years, or whatever.”

Scott Menzel: You hear about it from time to time but it is usually just a few films a year and  when you hear about it, there’s always a story. “Oh. This was in production hell” or something like that.

Jim Taylor: Unfortunately, it’s not a very interesting story. It just an ambitious film and nobody wanted to take the chance on it, basically. It was harder to find someone to take a chance on it. Then it’s a long time pre-production. It’s a year pre-production, once you even get going.

Scott Menzel:  I’m curious about when the film was actually done. I know someone who went to see this movie at the very first test screening and there was the animation and voice over. How many different version of this movie were screened? When did you decide that this was going to be the final cut?

Jim Taylor: That went pretty quickly because we hadn’t shot it yet.  It was something that was in the script, then out of it, then back in, because we always really loved it, and we still love it. It just made it too complicated, and it was  a made-up language. And also, in sort of screenwriters mind, if it can exist without it, maybe it should not be there. If you can take it out, you probably should. Yeah. It was only a couple of scenes.  Although, the script we sent out with our production draft has got it in there, if you’re interested in reading it because it has voiceover that threads through and stuff.

Scott Menzel: You’ve worked with Alexander Payne so many times, not only on films that he’s made himself, but some studio films as well like Jurassic Park 3. What is it about him that makes him so special? That makes you want to keep coming back and working with him over and over again?

Jim Taylor: We show each other our notes on the script and every time we say the same thing. There’s simply the shared amount of time that we know each other’s sensibility. We know how to work together. But mostly, it’s that we’re friends, and we think alike, and when we work together, it’s better than each of us working on our own. I think he’s a very meticulous writer. It’s funny. My wife is a writer-director, Tamara Jenkins, and I’ve worked with her some, and she’s one of the only other people in the world that I’ve been around or worked that has the same kind of level of, where you want it to go. There’s a lot of people who just dash things, and it’s like, “Okay. That’s fine.” We may be, perhaps to our detriment, are like churning things. We have done jobs like Jurassic Park. We worked on Meet The Parents. That’s uncredited, and there are a few other things where we did something really fast and it’s probably 85% of what we would want, that getting that extra 15% would probably hurt, taking our productivity levels way, way down.

Scott Menzel : The reaction to this film has really changed as the film screened at various festivals. Coming out of Venice, the buzz was very overwhelmingly positive. However, when it plated at Telluride, TIFF, and did some regular promotional screenings, the buzz has sort of died down a lot. As a writer and  someone who’s been so involved with some many different types of movies,  how does it feel when you see your film drop on Rotten Tomatoes? Lets say it’s at a one hundred percent fresh, and then you start seeing more and more people adding their reviews  and the film ends up with a mixed or negative response.  As a writer, something that you’ve personally created, what does that feeling like? I’m just curious about it.

Jim Taylor: It depends on what the complaints are. The puzzling thing with this film is that people seem be being put off by Hong Chau’s character. A lot of times when looking at other’s criticism I just go, “Yeah. I see that. I see what they’re saying.” This criticism I don’t get. I don’t see it. I can defend that, and I feel like that’s wrong.

Scott Menzel: And it seems Hong Chau feels very passionate about it as well, obviously.

Jim Taylor: But it shouldn’t even be on her really. I mean, we wrote the script and that’s troubling, that if it would go that way, because of that. I don’t know. I just think people think what they think, and of course it would be nice if that number was higher. I have a feeling it’s sort of at its lowest point now. Most of the critics who’ve weighed in, I don’t know about yourself, I feel are having knee-jerk reactions about Hong or just feel the movie’s too meandering, or whatever, which, maybe that’s true. I don’t know. I hope people see the movie. In a way,  this is the first movie we’ve had that probably won’t be so critic-driven.

Scott Menzel: Right, which is very interesting, because Alexander Payne movies usually receive a lot of  critical praise. Everybody under the sun was talking about The Descendants. So, with this one, it’s interesting, because I am the founder of the LAOFCS critics group, and it’s funny, because the movie really doesn’t get brought up  at all.

Jim Taylor: As much as I don’t pay attention to the stuff, I’ve cared less and less about it, I was glad that some critics groups have included us, because I feel we should be a part of the conversation in a way.

Scott Menzel: I’ve been noticing a lot this year and its  been really concerning. Critics are panning things, but audiences like it. I’ve had this conversation with a couple different directors and writers over the last couple of months. Goodbye Christopher Robin is a great example. Critics seems to have a lot of problems with it. Another example is Andy Serkis’s Breathe and  I was at that Toronto premiere of that.  The crowd went wild. People crying. Standing ovations. Craziness. You read the reviews. “Ah, this is crap … It’s pandering. It’s manipulative.” I didn’t feel that way at all. How do you think that kind of contributes into everything now? It’s really hard in the era of Rotten Tomatoes, and it’s sort of stupid that we have let one site, define our entire jobs to everyone. It’s not even an honest opinion, but how do  you feel about that as a writer, where your work now always comes down to “What is the film’s score on Rotten Tomatoes?”

Jim Taylor: There are a certain number of people in the world who pay attention to critics or would pay attention to that number. Then there’s a subset of those people who are going to look at who’s saying what. It’s how get your information. I mean, I say that you have trusted critics, and that’s usually the way that would be best, but I don’t know if it’s reduced to a number if I would be happy. Because it has its upside and its downside. The fact that movies couldn’t be just shoved down people’s throats and marketed so that the first weekend when  all the tweets would go out, and, “This is terrible.” You couldn’t just spend a huge amount of money and make everyone go to an awful movie, is a great thing, But the downside of it might be that there’s this group, or, crowdsourced kind of guide that isn’t necessarily helping and it’s hurting so many films. Not everything has to be Citizen Kane. It’s just like our democracy. It takes an informed electorate to make a good decision. You just can’t have a vote. You have to have an informed vote.

Scott Menzel: Last question, what did you want audiences to take away from tis film?

Jim Taylor: I don’t want to depress people. I think people come out sobered a little bit. So, that they have  fun. They enjoy it, but a little bit of sobering, and then the idea that really the most important thing is your connection with other people. Like I said before, we’re not saving the planet. We’re saving people ’cause the planet’s going to be fine. If you want to save people, you can’t crawl in a hole, and you’ve got to stay active.

Scott Menzel: Well, thank you very much for the great interview. I look forward to seeing what film you write next.