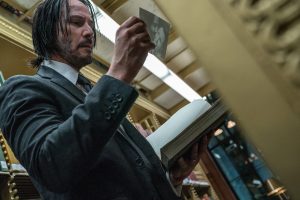 I’ve written before about how I’m less into current movies than I was 20 years ago, theorizing that it was just the natural aging process when you outgrow the target demographic. But if they made every movie like John Wick: Chapter 3 – Parabellum then I’d be excited every week.

You can just feel the amount of care and precision put into the John Wick movies, as opposed to other movies that are done mostly in Post. These movies aren’t just thrown together. Every element is a decision made to make it more effective. That’s not just the action. It’s down to the sound design. The crunch of each hit, the shattering of glass, everything works to enhance the scene. 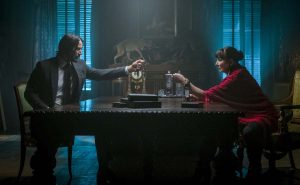 It turns out there is room for epic fights, character development, drama and world building in the same movie. It can be done. It just requires smart writers, an ambitious director, behind the scenes talent and committed actors.

New characters in John Wick have history they allude to but never discuss explicitly because the unknown is far more dramatic. There are no easy choices. To resolve a bad situation, John Wick (Keanu Reeves) makes a worse deal. You feel the emotional sacrifices 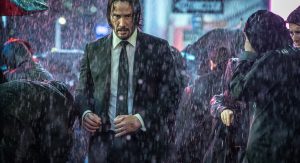 John Wick: Chapter 3 begins with a ticking clock down to 6PM, the moment Wick becomes excommunicado, and you feel every second of it. Most of the people operating in the Continental world, including Wick himself, honor the rules. It makes you wish our actual government would play by their own rules the way these fictional assassins honor their code. 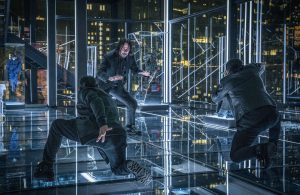 The action scenes set up parameters where you know up front it’s going to be awesome, then you just sit back and relish the performers executing the brilliant choreography. The antique store has knife cases. They’re going to go through all those knives, however long it takes. There’s a chamber of glass and mirrors for multiple levels. That’s going to be a three dimensional scuffle.

John Wick: Chapter 3 seems to emphasize more hand to hand combat than the first two, which is a great asset, but there’s no shortage of elaborate gun battles either. There’s also a lot of fight scenes in motion. John Wick rides a horse. How many things is he going to do on a horse to evade his captors? There’s a fight on speeding motorcycles. 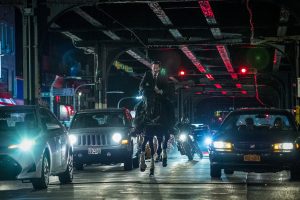 Most of the action is practical. When you can spot CGI you can also tell it was done to keep animals safe, or used in concert with still dangerous stunts. I actually hope they used CGI to put Reeves’ face on the motorcycle driver because otherwise how could insurance allow that? CGI bullet hits still can’t equal squibs, but I’m so grateful for the relentlessly exciting choreography, I’m not going to ask them to time squib hits on top of that! 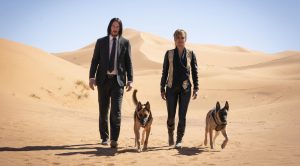 What a gift Keanu Reeves is to cinema. His grace is extraordinary, and yes, it takes many cleverly disguised stuntmen plus Reeves to equal one John Wick but they are all surpassing the apex of their fields, let alone meeting the average or bare minimum. Mark Dacascos gets his best choreography since Drive (not the Refn) and it’s great to see Yayan Ruhian and Cecep Arif Rahman fight too. Attack dogs are even choreographed 87eleven style and they are a highlight of the sequence that involves them. 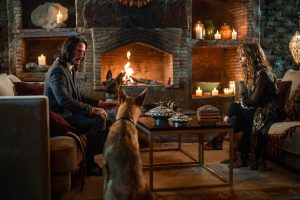 I couldn’t be any happier with John Wick: Chapter 3 – Parabellum. The only thing higher are my expectations for John Wick 4 which can’t come soon enough.