The Oath marks the directorial debut of comedic actor Ike Barinholtz. I was lucky enough to see The Oath a few weeks ago at an early press screening right before the LA premiere. I walked out of this film uncertain of what to think about it and was somewhat in shock by what I was just watched. Barinholtz has created a razor-sharp politically charged satire that was nothing like I expected. This is a film that asks big questions, not only about politics and being an American but also about our obsession with the media and the anger and confrontation it tends to create.

I got to sit down with Jon Barinholtz and Meredith Hagner to share my thoughts on the film and also ask them a few questions about the film and its themes.

Scott Menzel: I want to say first and foremost congratulations on the film.

Scott Menzel: When I watched this movie and I walked away from it, I didn’t know what to make of it which is something that I feel is so incredibly rare nowadays, so thank you for being part of something like that.

Scott Menzel: With that being said, what was it like when you first read this script and what was it about it that made you want to do it?

Meredith Hagner: I think some of the best humor comes from a little bit of a dark place and I think that, for me, I was like, “This is funny” and yet, it’s confronting because I think we can all imagine a world in which this isn’t so far off. And there was something exciting about it, and also for me, I was like, “Oh, I get to play something different that I haven’t played before” which was exciting.

Jon Barinholtz: You know when you hear of an invention, and you’re like, “Oh, yeah, that makes total sense” and that’s when you know it’s a good thing? That’s what I felt like reading this script. I was like, “Oh, yeah, that’s in my brain too.” I don’t know, I just had this feeling of that’s something I can touch and a world that isn’t here right now but I can see it being here soon and it just felt like it makes sense. This is a great script.

Scott Menzel: How closely did this script relate to your family?

Jon Barinholtz: I think pieces of it definitely existed for me. The minutia, kind of like the dad with the remote that is our dad holding the remote. The full on table fighting, not so much. But, that being said, a couple of years ago after the election, my mom, my brother, and I, who are all aligned politically found ourselves in an intense debate amongst each other about what had happened with the election and we were all disagreeing. And that was like, oh, we’re always aligned, how are we here? And I think that was like if we’re like this other people must be experiencing this.

Meredith Hagner: And my family’s totally divided politically. We have different opinions and we all love each other, regardless, but it becomes harder and harder to not talk about the elephant in the room and I think this is, obviously, a heightened version of that, like times ten. But there’s definitely something at the core of that that I can relate to in my family.

Scott Menzel: Okay, so a big question that I feel the film poses is if social media and the media did not exist, would we all get along a little bit better? Do you think so?

Meredith Hagner: I think so.

Jon Barinholtz: I don’t know about the media. Social media I think definitely can be divisive. There are things that are cool about it and connect people but at the same time now you have a connection where maybe there shouldn’t have been. You have the squeaky wheels getting the grease, you know? So like the loudest people and the most audacious on social media are going to draw attention. I think that is a huge downside to it.

Meredith Hagner: And I think with social media you really can hide behind a persona. I think my character is part of that, where she exists in the political spectrum and how she engages with it, is like a way to hide from her own humanity, in sense. And I think social media can be dangerous in that way where you can, kind of, hide behind your opinions. You might say things you wouldn’t feel comfortable saying to someone face to face.

Jon Barinholtz: Yeah, social media’s dangerous. One time in the search field on Facebook I put someone’s name but it was in my comment field. So then I just had that person’s name on my page and that was really embarrassing.

Scott Menzel: Well, thank you so much. I really enjoyed this film.

Scott Menzel: It’s one of those movies that I think you can take more and more out of it on repeat viewings, so congratulations for being part of something so incredibly rare.

Scott Menzel: Thank you, have a great one.

Meredith Hagner: So nice to meet you.

The Oath  is now playing in select theaters. 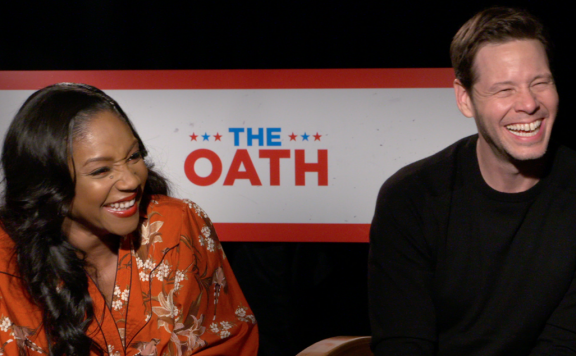 Tiffany Haddish and Ike Barinholtz talk about The Oath and people on their cell phones.
October 13, 2018