2015’s Jurassic World referenced the idea that dinosaurs were not cool anymore. It was unsubtle commentary referring to the loss of wonder in blockbuster entertainment, and in a way, it’s right. Steven Spielberg showed audiences dinosaurs in a way never seen before back in 1993’s Jurassic Park. Since then, the evolution of special effects has only allowed more and more films to impress audiences with spectacle. How often is that enough to satisfy? Jurassic World Dominion has fewer meta intentions though it does pack its runtime with plenty of dino-mania. Is that enough to appease viewers? One thing is for sure, the appeal of dinosaurs in action has held strong.

We’ve gone from 15 minutes of dinosaur footage in the first film, relying on a combination of animatronics and CG, to having full shots of dinosaurs every couple of minutes. Perhaps that’s stretching what some audiences may be willing to buy into, but when it comes to this series, dialing back the dinos doesn’t really appeal to me. I have a feeling that’s the same for kids as well. While all of these films attempt to balance adventure with a dash of horror, dinosaurs have never not been appealing.

These are giant beasts that come in different colors and behave in unique ways, which can be a lot of fun. Spielberg knew how to tap into that. Director Joe Johnston pretty much approached Jurassic Park 3 as a film about taking all the dinosaur toys and putting them into a sandbox to deliver a straight-up monster movie. I believe director Colin Trevorrow understands this level of purity as well. Sure, he may be attempting to add some deeper themes about humanity on top of his entries, but the dinosaur set pieces have a grand sense of playfulness to them. A lot of this is why I just don’t take these Jurassic movies very seriously. 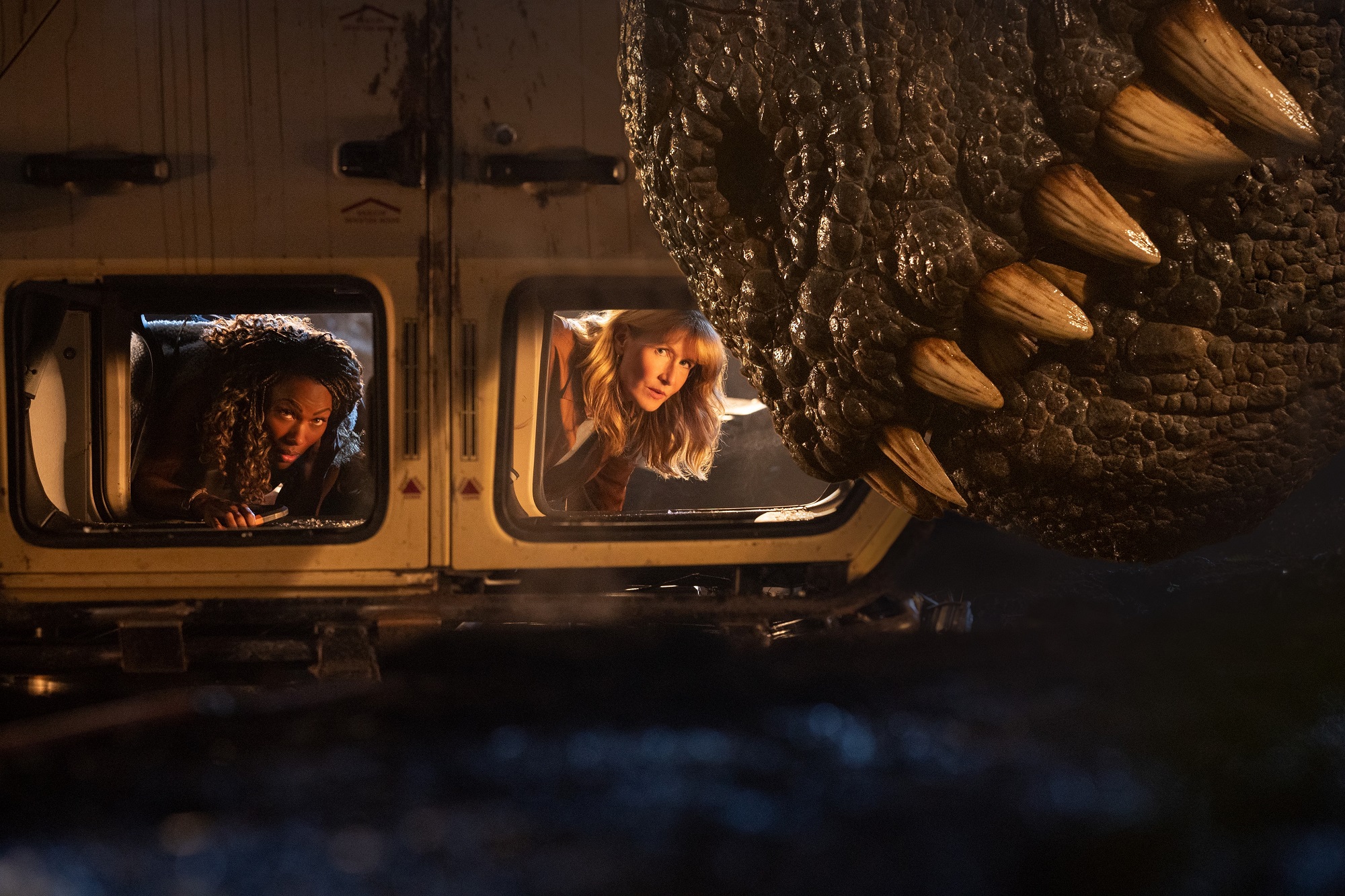 While not the first time I had this feeling, it was during Jurassic World: Fallen Kingdom when I really took a beat to think about how silly this franchise is. The first film is about a dinosaur theme park test run that goes horribly wrong. 1997’s The Lost World: Jurassic Park has characters thinking they can do it again, but on the mainland, and it still goes horribly awry. Jurassic Park 3 has Sam Neill’s Dr. Alan Grant bamboozled into returning to dinosaur island to rescue a kid. This is not the foundation of a franchise that deserves prestigious regard.

At this point, Jurassic Park seems to be considered a modern classic, and I can understand that. So, almost 30 years later, what else can you do? Can any film recreate that wonder? Fallen Kingdom left the series in a place of intrigue – what if the dinosaurs truly got loose and people had to learn to co-exist with them? That’s a juicy idea, and I’d be mad at this film for not exploring it more were it not for the ridiculous (yet personal) setup that this story aims for instead.

With the dinosaur island destroyed, we are now in globetrotting territory. Owen Grady (Chris Pratt) and Claire Dearing (Bryce Dallas Howard) find themselves on a rescue mission when their surrogate daughter, Maisie (Isabella Sermon), is kidnapped. Also kidnapped – the child of Blue the Raptor (the World trilogy’s hero, who is strangely sidelined in this film – because, in my head, Blue should have been sitting shotgun with Owen the whole time). 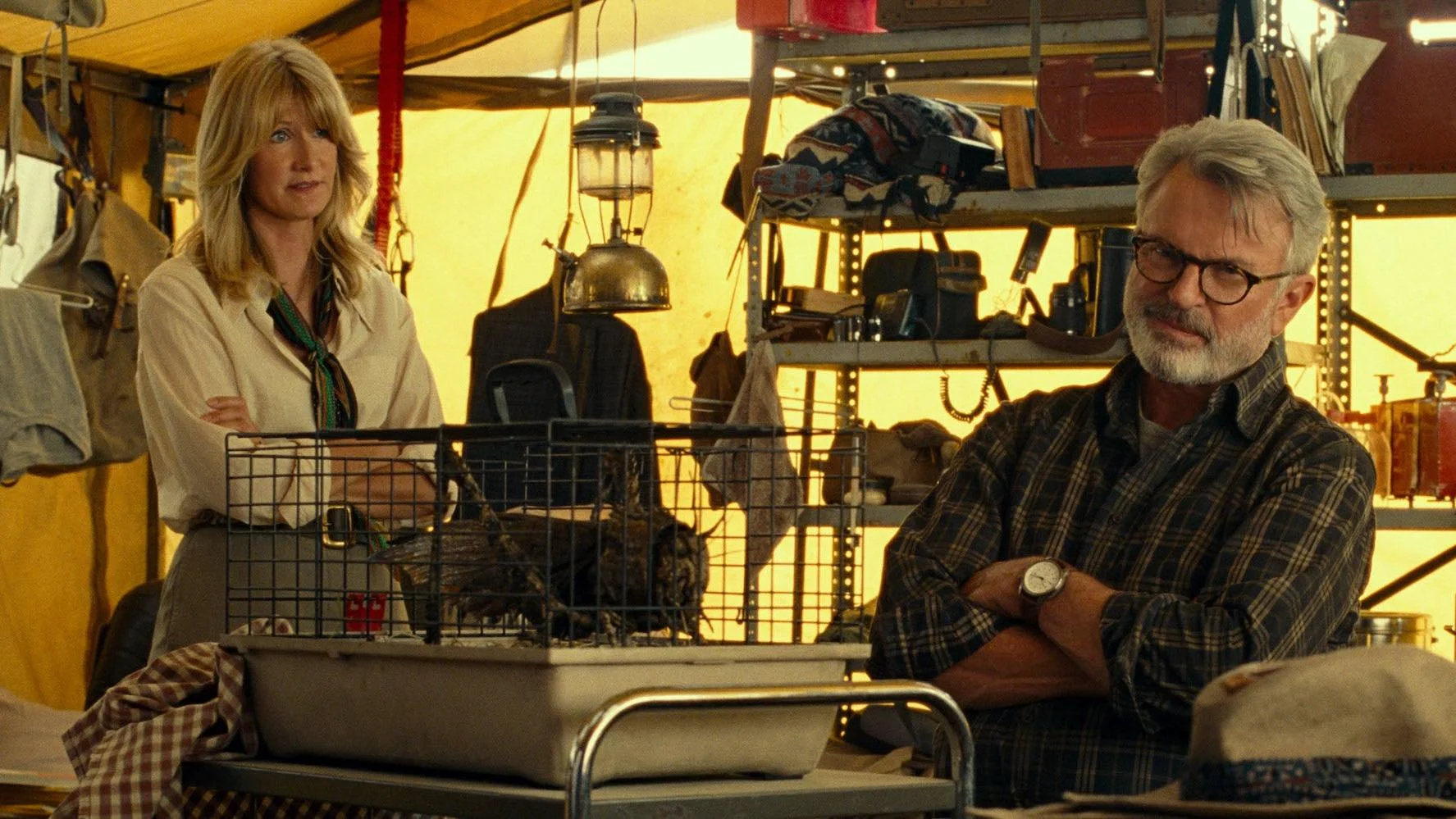 At the same time, Dr. Ellie Sattler (Laura Dern) and Dr. Grant have been informed by Dr. Ian Malcolm (Jeff Goldblum) about some nefarious business with Biosyn Genetics. This company is secretly responsible for genetically engineered locusts that could pose a serious threat to the world. Will these two plots combine, allowing our old and new heroes to complete an adventure together? Bingo – Dino DNA is afoot!

In detailing just some of what’s going on, it’s no surprise this is the longest film in the franchise, at 146 minutes (with credits). A lot of that comes down to justifying the presence of each returning cast member (including others from the past couple of films), making this an Avengers-like entry for the Jurassic saga. At a time when legacy sequels and nostalgic-fueled entertainment are turning new franchise entries into much bigger successes, I can at least admire how Dominion doesn’t leave anyone in the dust.

Crediting solid character work may be going a step too far (after all, these are adventure-monster movies more than anything). Still, I was happy to see Pratt and Dallas Howard share nearly equal screentime with Dern, Neill, and Goldblum. It feels like an ensemble picture, and I enjoyed watching these performers play up the heightened versions of their roles. While the sense of awe is gone when they interact with dinosaurs, placing them in tense situations works well enough to see these people scramble and figure out their next move. An emphasis on teamwork, in particular, further shows the effort placed on making each role count. 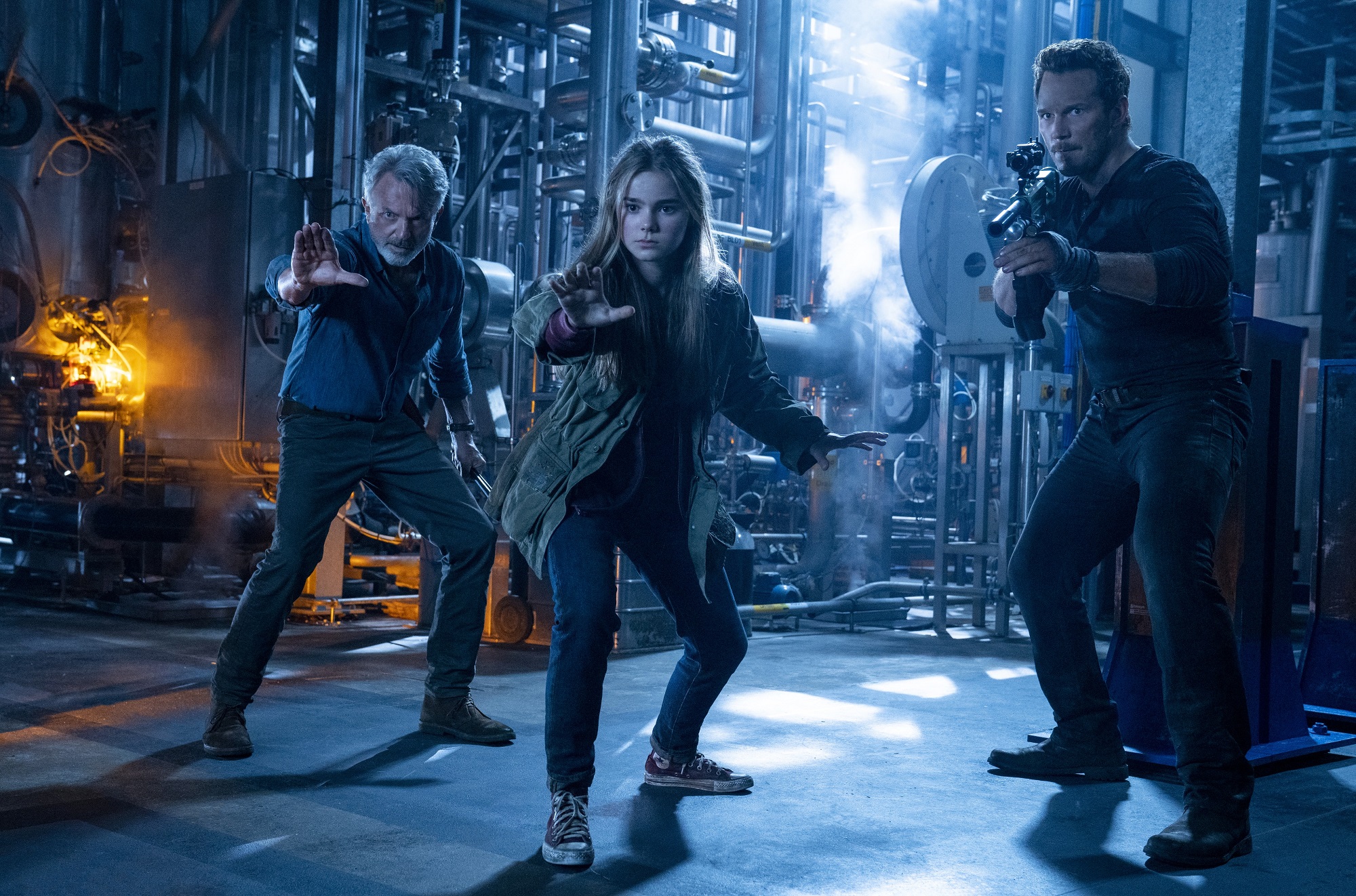 Similarly, new characters played by DeWanda Wise and Mamoudou Athie were welcome additions, with Wise, in particular, adding to the franchise’s need for an action star with personality. Again, these are not highly developed individuals, but they have enough to work with to leave an impression. This can most certainly be said for Campbell Scott, who portrays Dr. Lewis Dodgson, the CEO of Biosyn (the role has been recast, but Dodgson was last seen scheming with Wayne Knight’s turncoat in the first film). With a look and manner that has him feeling like a mustache-twirling Steve Jobs, if there’s a character that could seem like the opposite of rockstar scientist Ian Malcolm, Campbell nails it.

In terms of satisfying the franchise fans with all of these characters, I can just say the nostalgic joy that’s supposed to be garnered from seeing people like Ellie and Claire interact is fun enough without overdoing it. The third act relies heavily on everyone enjoying all of these team-ups. While I wish the stakes felt higher, I can’t say the film squandered the chances of placing Pratt, Neill, Goldblum, and company around each other.

Getting back to the dinosaurs and the relevance of this franchise – look, it’s clear that no Jurassic film is ever going to be as interested in debating the ethics of bringing these creatures back to life as the first film. Granted, that was necessary, as a great cast and good writing can make up for having only so much time and capability to show the dinosaurs. Now, in 2022, wall-to-wall dinosaurs are an achievable goal. Does it work? I suppose it depends on what one is looking for. 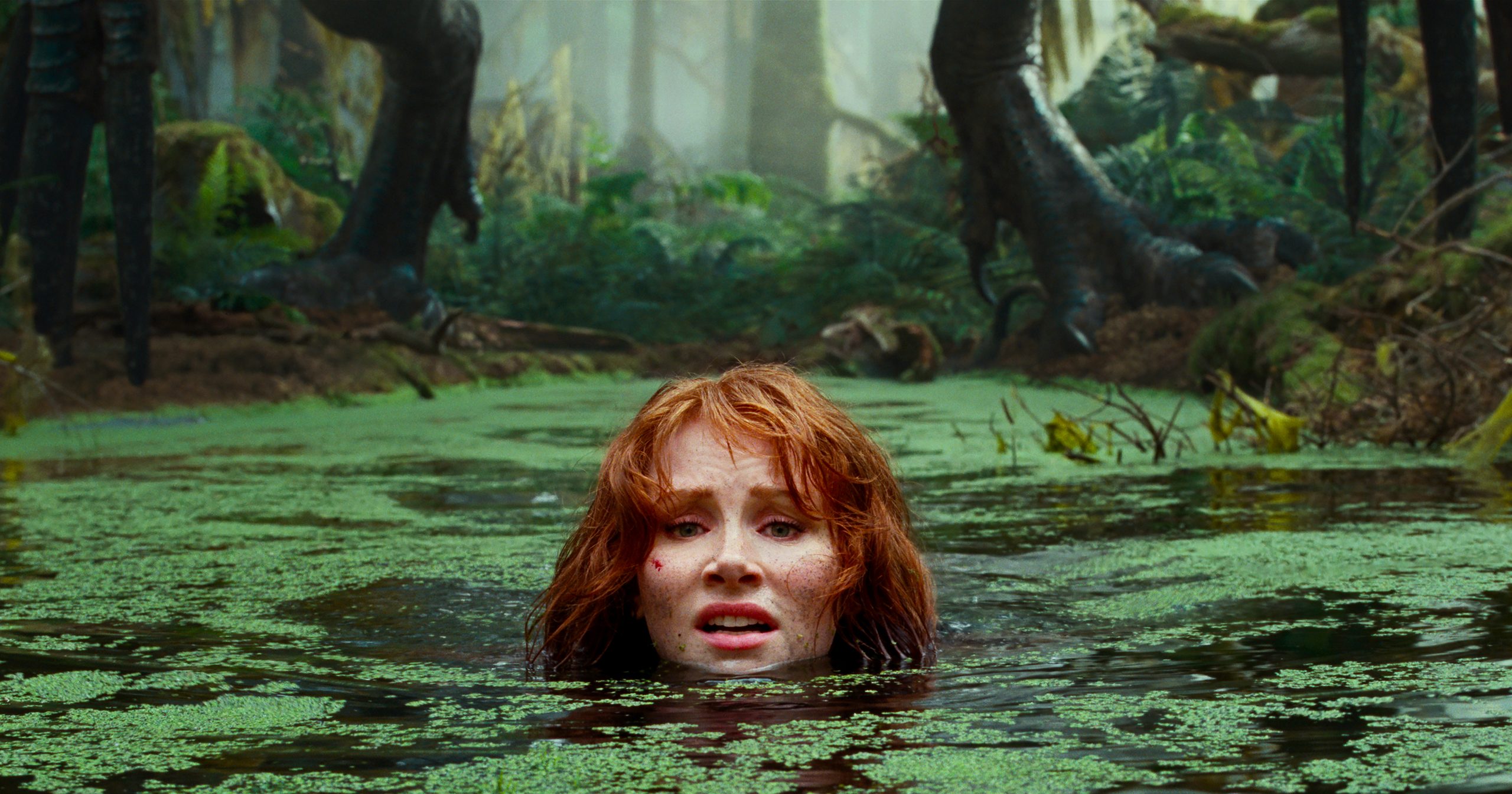 Jurassic World had the fun concept of actually seeing the theme park in active status (before things go horribly wrong…again). Fallen Kingdom decided to blend a disaster movie with a haunted house flick. Dominion has chosen to resemble a spy film of sorts by way of Jason Bourne or James Bond. All of these deliver equal levels of nonsense. Still, I remind myself again that there’s just no real pillar of greatness when it comes to the continued adventures of humans making bad decisions that lead to more dinosaur mayhem in the Jurassic sequels.

Rather than debating the quality of a functional script that’s more about placing characters in situations than exploring who they are, it’s just fun to watch a scene that features a car chase between a truck, a motorcycle, and multiple velociraptors. Could I learn more about the pilot-for-hire, or should I be more excited about watching a giant Pterodactyl take down her plane? Does losing a grip on the tenuous relations between humans and dinosaurs matter when two apex predators take center stage to fight to the death? It’s not that I don’t want better versions of some of these things, but I can’t deny enjoying so much of what I got.

If anything, the way this movie lets me down (aside from being generally pretty dumb) is how it placed limits on its viciousness. This is a monster movie in a series that hasn’t shied away from letting the “monsters” prey on many side characters. With so many protagonists to keep up with, it was shocking not to see more done with streamlining this cast via dino-related deaths.

Perhaps Trevorrow took it to heart when certain groups took issue with a hilariously over-the-top death in Jurassic World (which the actress involved requested for herself). Whatever the case, trying to walk that line between “we need to save these animals” and “get out of my way, there’s a dinosaur trying to eat me” only goes so far when the repercussions seem few and far between. 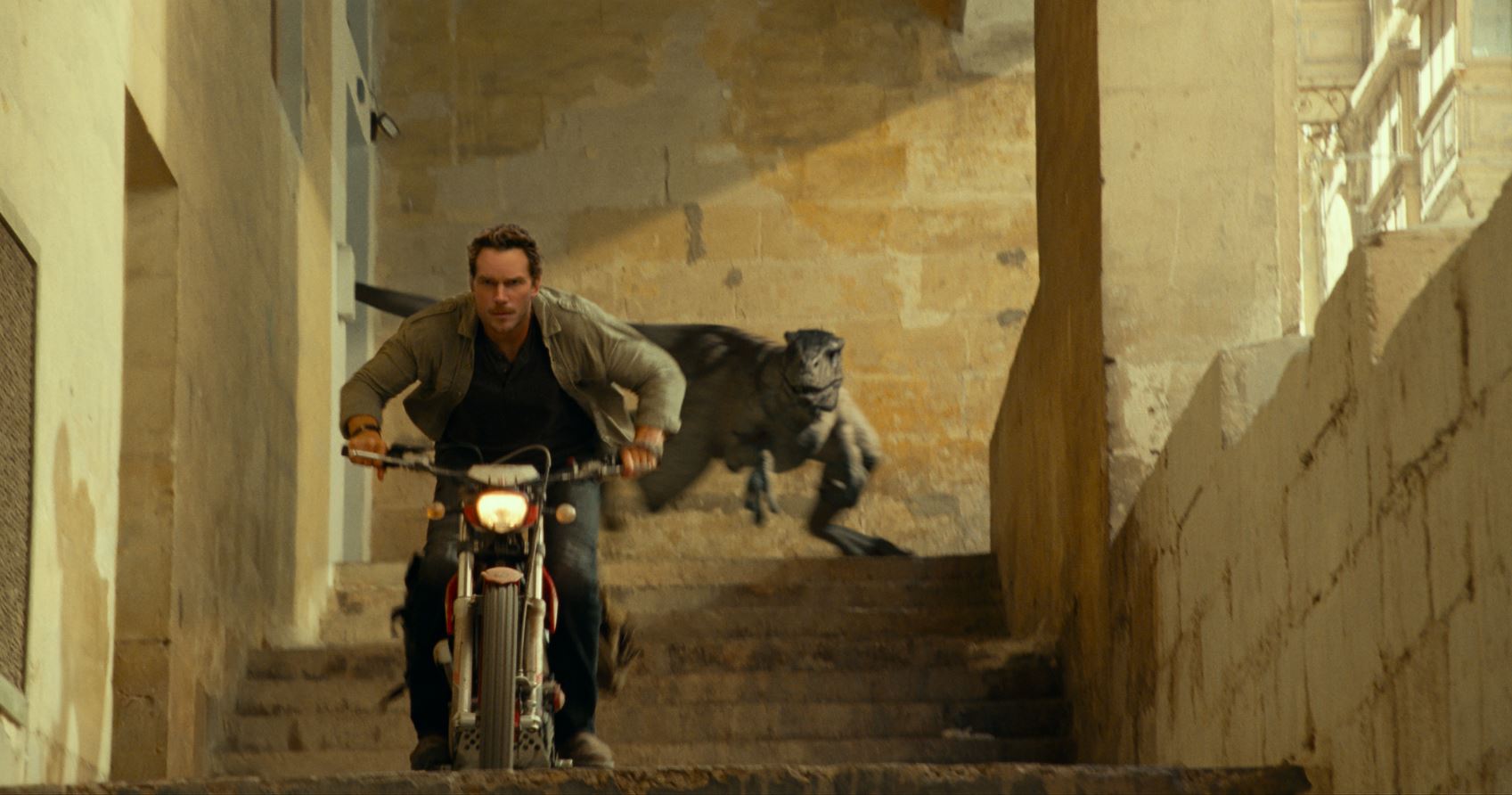 Other aspects could be seen as flawed, but for everything I could list as being “wrong” with this movie, I’d also come up with plenty that works. Is there a lot of stuff to sit through? Sure, though I never found it dull, and given that these are movies designed for kids to follow, it doesn’t have to trip over itself to make things understandable.

On top of that, if the film feels like it’s stretching its budget, that’s only because of its scope. At a time when so many films rely on less and less location shooting, it’s nice to see that the movie about giant animals has scale in mind. The sight of a brachiosaur wandering peacefully through the land may not be as amazing as the first time we saw it, but having it trudge through the snow before getting to other scenes involving dinos in cities, forests, farms, etc., felt pretty good.

Looking at all of this, the idea of dinosaurs not being cool anymore seems like a rigged statement. Watching pre-historic animals interact with humans can be a fun time. Is there a world where these various Jurassic movies make the most out of this basic idea? Sure. Does that leave me dissatisfied with what I’ve gotten? Honestly, no. There are lesser entries than others, but even if it’s just the primal instinct in me talking, I still get a kick out of watching these very expensive B-movies deliver dino spectacle. Jurassic World Dominion succeeds at that, allowing for plenty of “what if” scenarios to play out, giving audiences all they could ask for as far as crazy things to do with dinosaurs. One could almost say this film spared no expense.

Jurassic World Dominion opens in theaters and IMAX on June 10, 2022. 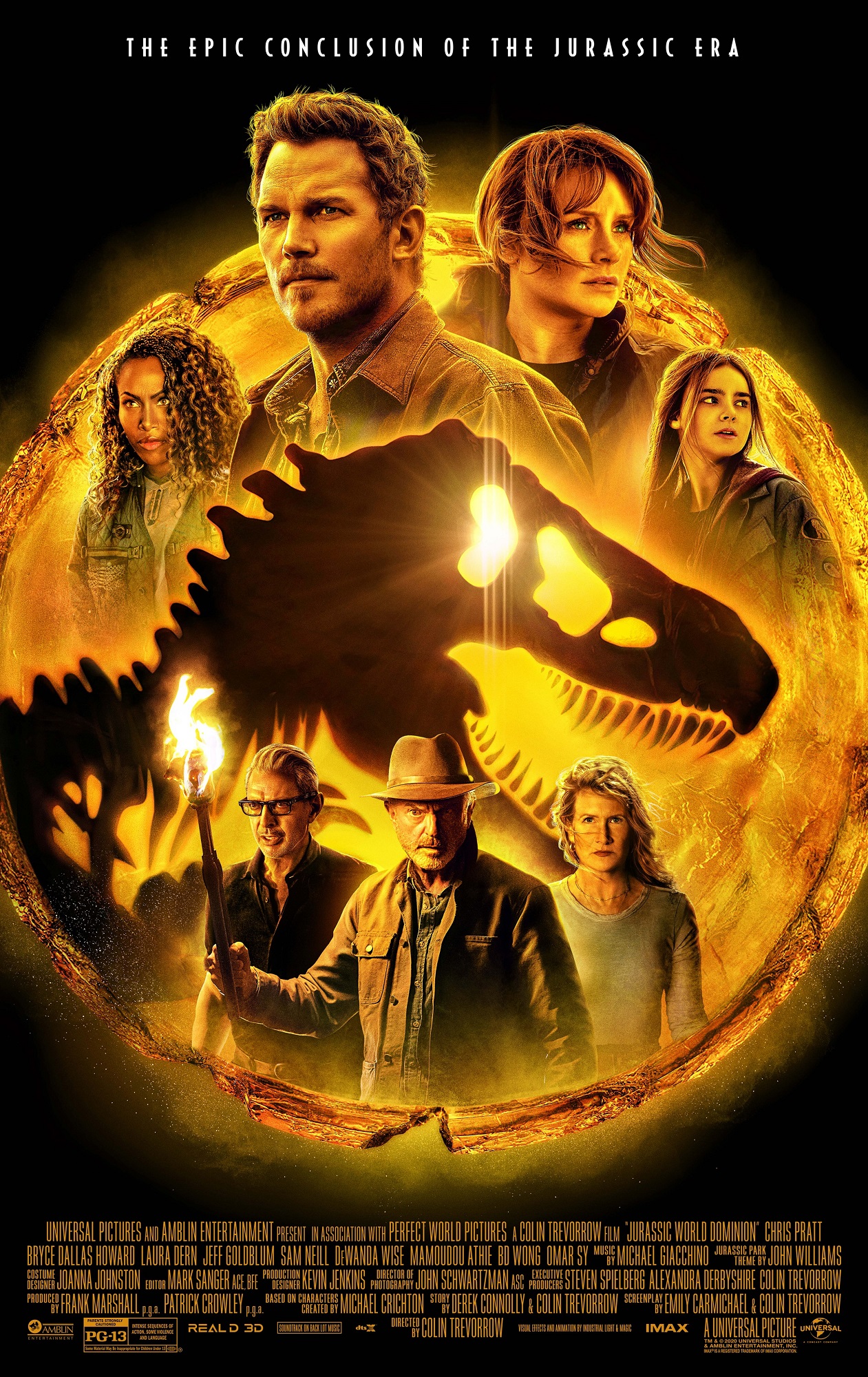 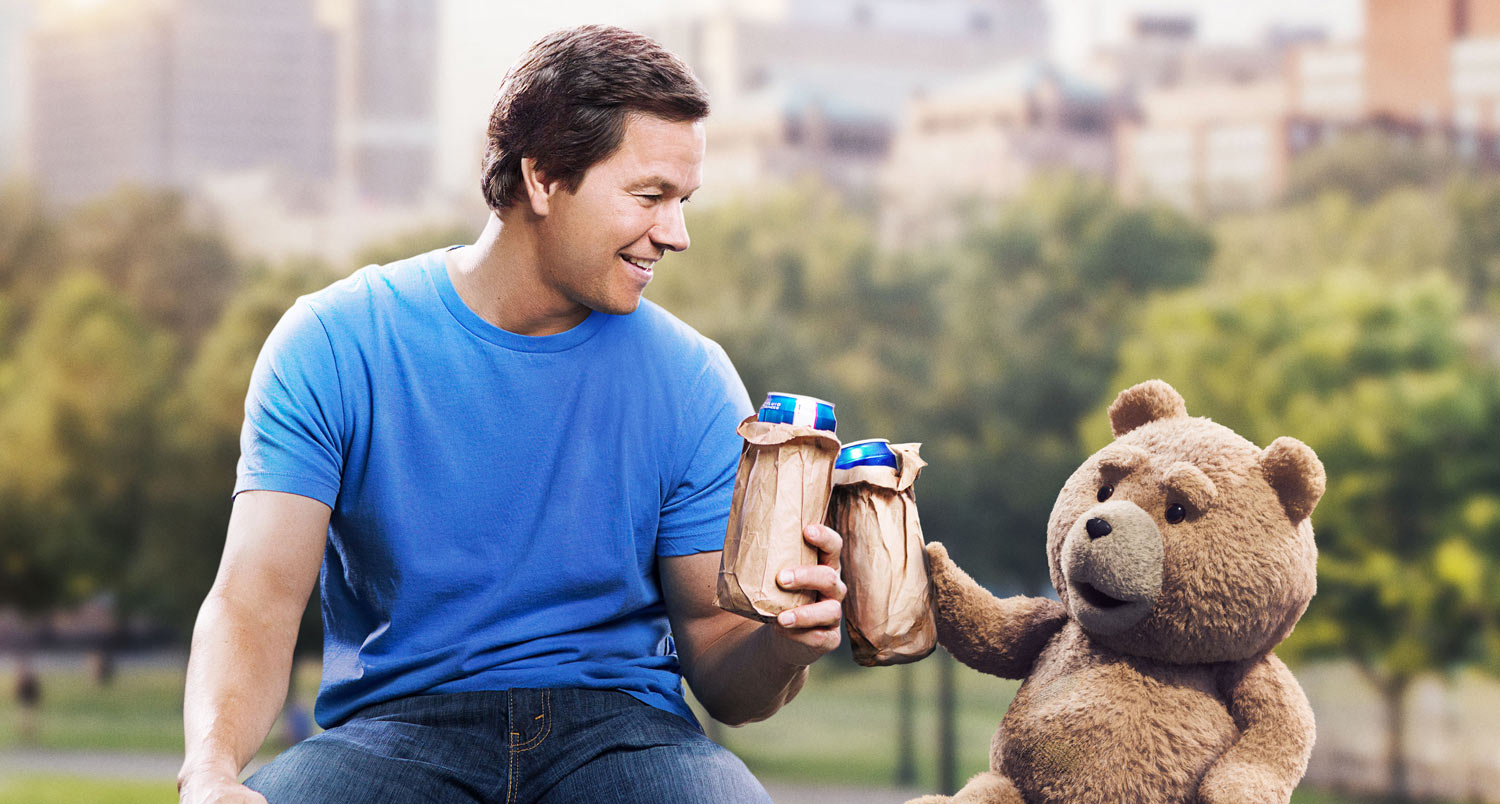 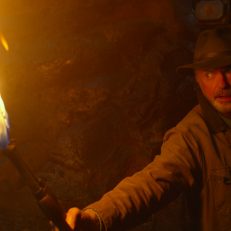 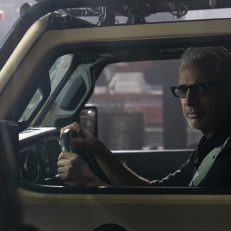 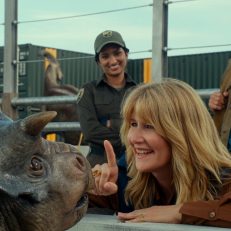 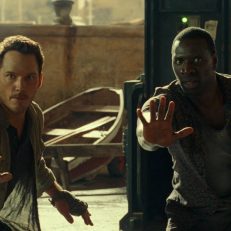 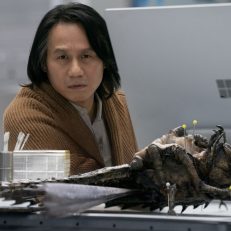 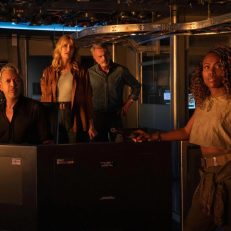 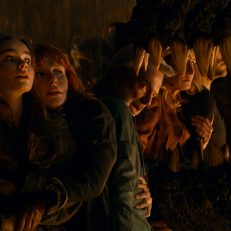 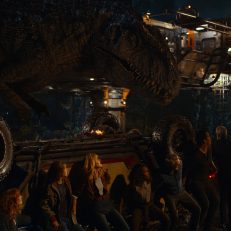