In Jurassic World: Fallen Kingdom, Toby Jones plays a global arms dealer who is brought in to sell off to the highest bidders one of the hottest commodity of all – dinosaurs!

Although Jones has played iniquitous types before, the talented British actor has run the gamut of characters in his long and varied film and TV career, including his outstanding performance as Truman Capote in Infamous. Although the film was dwarfed by Phillip Seymour Hoffman’s Oscar-winning Capote, Infamous gives a different take on Capote’s experience writing In Cold Blood. If you haven’t seen this movie, you have to check it out because Jones’ turn is equally as powerful.

I got to speak with Jones about the fun he had making Jurassic World: Fallen Kingdom, the science behind it – and his thoughts on making Infamous. Oh, and Jones really likes the name of our site.

Kit Bowen: Hi, Toby, nice to speak with you!

Toby Jones: Well, I’m ready to talk to someone called We Live rather than something disgusting or barely dead or we kill people regularly or whatever. [laughs]

Bowen: Yes, there are a lot of very strange-named websites, that’s for sure. First off, I’m a huge fan of yours. I’ve loved your work and the things that you’ve done. You’re one of these guys also that all of the sudden you pop up in a movie and I go, “Oh my gosh, Toby Jones is in it!”

Jones: That’s good! I was getting the feeling you barely see me in some ways.

Bowen: Were you a big fan of the Jurassic Park movies?

Jones: I was certainly a big fan of the first one. I had taken my kids to see Jurassic World. These things, like Harry Potter, get rediscovered with different generations, so yeah, I loved the first one. I think everyone does. I saw the film 25 years ago.

Jones: [laughs] There you go again with your “no death.” I love the way you’re company is coming from this. I love that.

Bowen: Thanks! You’re really good at playing these nefarious characters, who are not really evil but…

Jones: It’s funny you say that. I know that people think that I play villains. In England environment at the moment, the thing I’m most famous for is playing a benign metal detector [in Dectorists] – and it couldn’t be further away from a global arms dealer. It’s the opposite of that. And, you know, it’s kind of nice to have that contrast.

Bowen: What is it about these characters though that you like so much?

Jones: You know the director [J.A. Bayona] encourages you to move beyond just what’s down on the page, and try to invent some kind of story for what could just be a villain. So we talked a lot about a guy whose unscrupulously selling whatever is in front of him. It doesn’t matter if it’s guns or dinosaurs — it doesn’t matter what he’s selling, as long as it makes a lot of money. Like other people that one could imagine who have claimed they’re very good deal makers, he sees himself as primarily that. That he lives and dies to make deals. Then to think about how he might look, and we talk long and hard about people we might know in the years and satisfy that criteria and have fun thinking about him.

Bowen: What I really loved about this particular Jurassic movie is how Bayona brought it into more of an intimate setting. He kept all those iconic moments in a Jurassic Park movie, but that whole part in second half, bringing the action into a huge mansion, felt very cool.

Jones: Bringing into the dark house. And I mean, the darkness of, you know all that genetic stuff, I think he took it to a new low in a way, and kind of mysteriously strange what he revealed about the daughter and, and I suppose the unscrupulous nature of the human being in a way, it’s almost like the dinosaurs are the ones that are good, you know?

Bowen: Do you have a particular dinosaur that you loved the most?

Jones: I can’t remember every one. I’m very fond of the birds. Does that count? They’re dinosaurs, apparently. I don’t really understand the whole dinosaur fascination, it’s kind of interesting, isn’t it? People come up with various explanations, and I never really understood clearly about the scale or the mystery of their disappearance.

Bowen: What do you think about this technology? Could we make Jurassic World a reality?

Jones: I starred in a film called Morgan. It’s about generating a perfect genetic fighter, as it were. And when we were looking at that, we went to various websites where clearly the information was there, where you could make money by replicating DNA and playing with DNA. Yeah, I mean, it’s, it’s a lot there’s a lot of horrific and menacing thought, but I think–like so many things, technology, biology, or computer science or whatever, if it can be done, it will be done, it’s very hard to legislate.

Bowen: Very true. Well, before we jump off, I really have to tell you how much I’ve loved your performance as Truman Capote in Infamous. Not to take away from the late Philip Seymour Hoffman in Capote, who quite deservedly won his Oscar for his performance, but, I just felt like you captured Capote so brilliantly. I know it’s been many years since you played that, but can you talk a little about playing Capote.

Jones: It was a fantastic script. [Writer/director] Douglas McGrath had written a very elegant script that, I think, in a way explained who Capote was before the event around writing In Cold Blood. I think there was a sense of contextualizing, which is slightly different than the other film, and I think this being more of a mixture of comedy and tragedy in that story. I thought it was two shots of brilliance, and it was a real honor not only to work on the script but really to work with the cast that he managed to assemble. It’s a tale of characters, and as much as the film suffered at the box office the strength of the script is still there. It gives a different perspective. 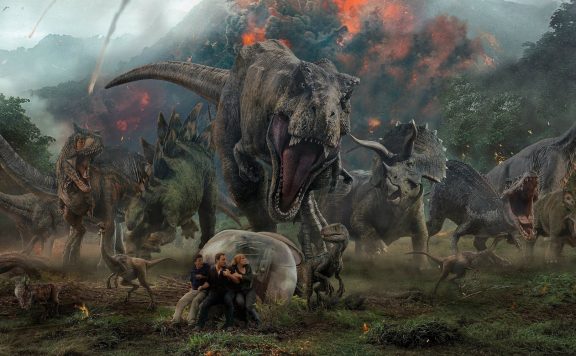 Jurassic World: Fallen Kingdom Review: The Jurassic Park sequel that I have been waiting 25 years for.
June 5, 2018