Caitlin Parrish and Erica Weiss co-direct their first feature and bring it to the LA Film Festival for its World Premiere. While I was unable to attend the premiere, I was able to catch a press screening and feel extremely lucky to have seen this remarkable gem of a film. The View From Tall should be a required viewing for anyone who has ever judged a person without knowing them first. It is a bold story that takes a rather taboo subject and turns it into a thought-provoking character study. Justine (Amanda Drinkall) is a well educated high school senior who comes from a dysfunctional upper middle class family. She is looked down upon and teased at school for being tall, smart and socially awkward.

One day, Justine gets publicly ridiculed by one of her male classmates who decides to read her personal essay out-loud to the class. Jason, the teacher of the course, quickly stops Brett and kicks him out of class. Upset by what just occurred, Justine turns to Jason for comfort. After years of feeling ignored by almost everyone in her life, Justine feels a connection with Jason and soon begins a sexual relationship with him. Word quickly gets out and everyone including Justine’s parents begin judging her and her actions. Mandated by her parents to see a therapist, Justine meets Douglas (Michael Patrick Thornton), a wheel chair bound man who she is forced to talk to. What starts off as a forced and unwanted interaction soon becomes a bond that will help Justine make it through the rest of her senior year.

The View From Tall is an incredible film because it is simple yet complex. The taboo subject matter of a 17 year old sleeping with a teacher is something that is constantly being talked about but is rarely truly examined. This film handles that subject with such love and care. The story is bold, daring, and thought-provoking and focuses on two flawed characters dealing with everyday life as well as their inner demons. The story isn’t afraid to take on the idea of a 17 year old being viewed as an adult who should be held accountable for her actions and learn from them. This isn’t the whole “it’s the teachers fault” headline that we have seen time and time again in the news. Justine isn’t the innocent lamb but rather an intelligent woman looking for someone to latch onto who is more at her level.

This is a small film with a very small budget but that doesn’t take away from how powerful the story and the performances are. I have never seen Amanda Drinkall in anything prior to this film but I can safely say that this woman is going places. Her performance as Justine is captivating. She portrays such a complex teenager that is dealing with so many personal struggles. There is more to this story than a high-schooler being bullied but rather a crappy upbringing where she is constantly being judged by her family. Drinkall embraces all these dimensions of her character with such ease and passion. You feel her pain and frustration as the story moves along. You question her actions yet oddly enough want to side with her. Her performance along with the excellent script really makes you question things.

Michael Patrick Thornton acts alongside Drinkall as Douglas. Thornton’s character is well-written and portrayed brilliantly. Douglas, just like Justine, is a complicated person with a lot of backstory. When he shares his story about his father with Justine it is almost heartbreaking. There are so many moments between these two characters that just have that spark that you rarely see between two actors on-screen. They truly understand one another as the film goes on. It becomes this remarkable friendship that so many people wish they had with another person. The kind of friendship where you can just spend hours upon hours at a coffee shop rather than looking at your cell phone or watching television.

The film’s supporting cast does their job but rarely do any standout above Thornton and Drinkall. Justine’s sister Paula played by Carolyn Braver seems a bit overly dramatic at times but given the fact that this is her first time in a feature length film, I wasn’t too bothered by it. I did like how the film showed all the family members and their behaviors. I like that this was a story about a upper middle class family instead of the lower middle class family that are often the subject matters in films like this. I think there was a real level of authenticity to the film because nothing feels sugarcoated but rather as if it is telling a personal true story. 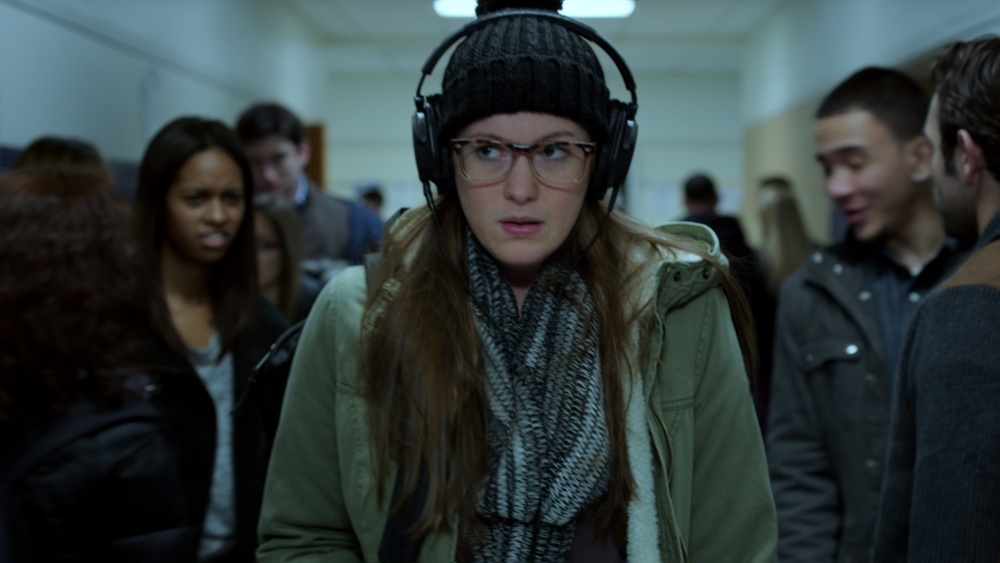 The View from Tall is everything a great independent film should be. It takes a risky subject matter and dissects it. The performances are well-rounded and full of emotion. The story makes you think and feels 100% genuine. This isn’t a film that is afraid to spark a conversation and take a look at a subject from a viewpoint that isn’t the norm. I applaud everyone involved with this film and can only hope that more and more people seek it out. This is one hidden indie that should definitely be found.

MovieManMenzel’s final rating for The View From Tall is a 9 out of 10.

LA Film Festival Review: “The View from Tall” is Bold, Daring and Thought-Provoking

Caitlin Parrish and Erica Weiss co-direct their first feature and bring it to the LA Film Festival for its World Premiere. While I was unable to attend the premiere, I was able to catch a press screening and feel extremely lucky to have see...
0
Average User Rating
0 votes
Please sign in to rate.