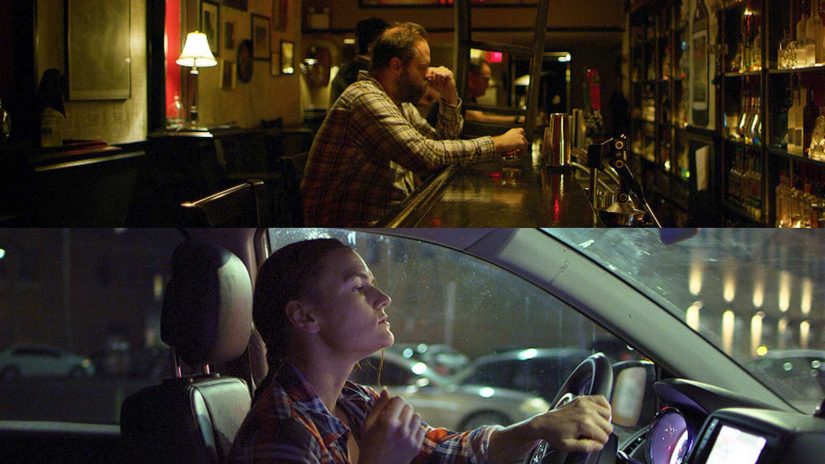 Depression can be a complicated subject matter when it comes to portraying it truthfully in a fictional feature film. Oftentimes, the filmmaker either sugarcoats the intense sadness that those struggling feel or they can’t quite find the right balance between good storytelling and frustrating sentimentality. However, once in a while there is a story that resonates with heart and honesty, something pure and heartfelt. This is the case with Gavin Michael Booth’s wonderful feature, LAST CALL. It’s a simple story. One man looking for help dials the wrong number and finds himself on a phone call with a young woman working late at night as a janitor. While this may not sound terribly compelling, there’s certainly much more than meets the eye.

The question is, what is so special about two people on the phone for nearly the entire one hour and seventeen minutes running time? Well, there are a couple of unique aspects of this particular production. First off, similarly to the magnificent 1917, this film was seemingly shot in one take. Yet unlike the brilliant Sam Mendes award winner, this is actually shot in one take without cuts, and by using split-screen. This may sound like a gimmick – and perhaps it is somewhat – but it’s one that works on an emotional level. This is a story of two people struggling through their lives. It’s also one that may give a little hope to someone dealing with their own misery. The idea of one stranger taking time from her life to helping another is so basic, and ultimately its part of what makes this work. 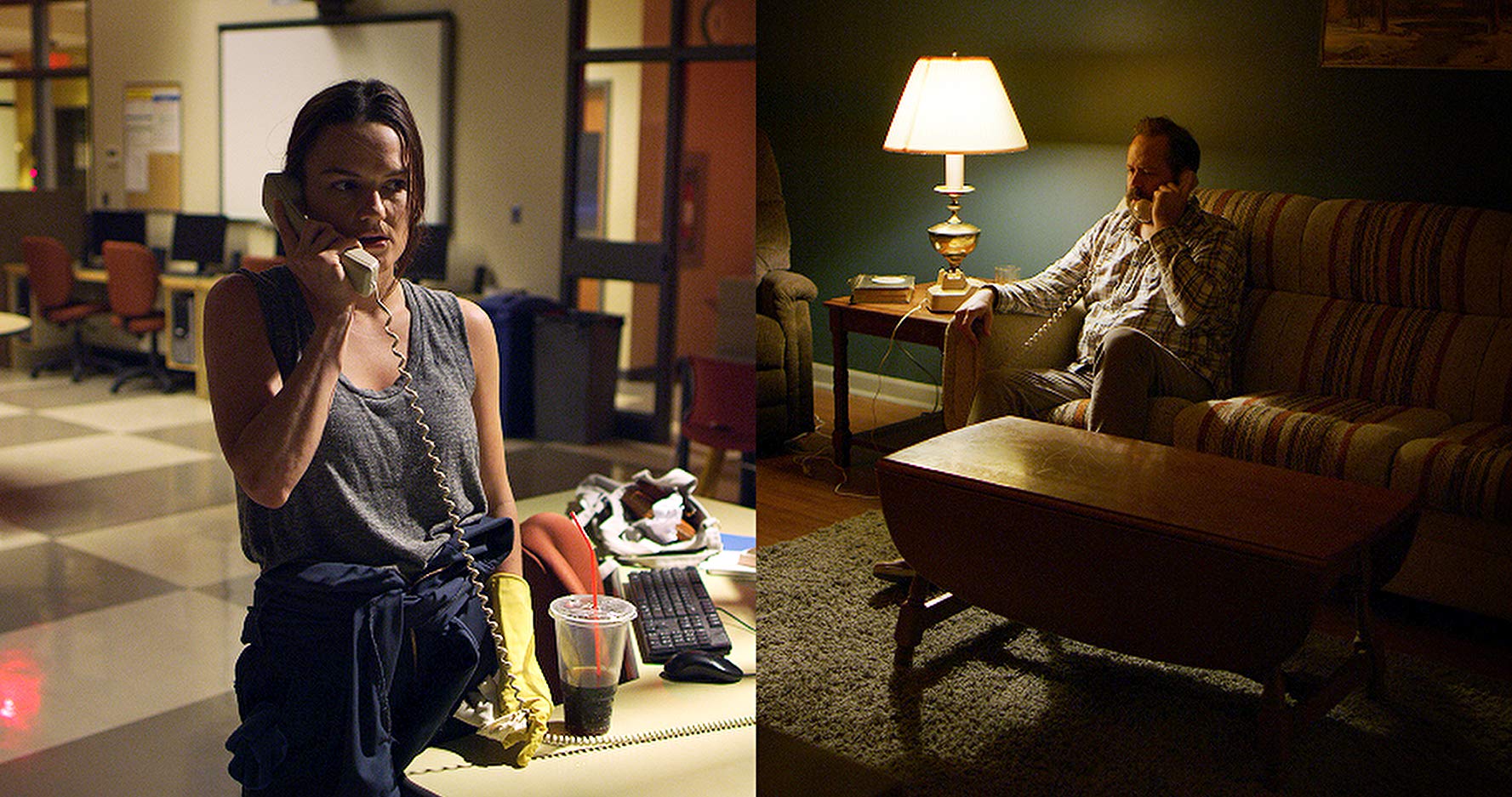 Beth (played by Sarah Booth) is a young woman dealing with a bit of a crisis. While on her way to work she is struggling with a few family issues regarding her son. Already frustrated and concerned, but still having to show up for her job, her night suddenly becomes even more complicated. Hoping to reach a suicide prevention center, a divorced family man named Scott (Daved Wilkins) accidentally dials into Beth’s work. At first confused, the two begin to have a conversation. While there may be an early mistrust, Scott and Beth begin to find some common ground. And more importantly, Beth realizes that this kind of man truly just needs someone to listen to him. For such a simple story, Booth’s impressive feature takes a layered and emotionally profound approach.

By shooting LAST CALL in one take, and splitting the screen down the middle (or across depending on the sequence), we see how Beth and Scott are spending their time while speaking to each other. As well, each actors’ storyline was shot simultaneously helping cement the impact of their story.

Surely this low budget experiment could’ve easily felt overly precious and perhaps more than a bit pretentious, but it doesn’t. Thankfully, with the focus on character, Booth manages to explore this delicate subject matter with assuredness and integrity. There is great care taken to give his actors equal exploration, and letting the viewer in and injecting us into both of their struggles. It’s nearly impossible not to connect. After all, many of the struggles they are going through are universal in theme, something that only makes the film feel all the more personal.

When it comes to the performances, this simply wouldn’t have worked at all if Booth hadn’t been smart about casting. Daved Wilkins brings such warmth and heart to a man who feels as though the world has given up on him. As for Sarah Booth – who also happens to be Gavin’s wife – there is a wonderful sense of warmth that she brings to Beth. Why does she care about this strange man that may or may not be ready to end his life? Well, thanks to Sarah, she is clearly a woman who cares deeply about others, even sometimes putting their worries above her own trials and tribulations. In fact, watching the two connect is so shockingly powerful that it makes the already short running time speed by. 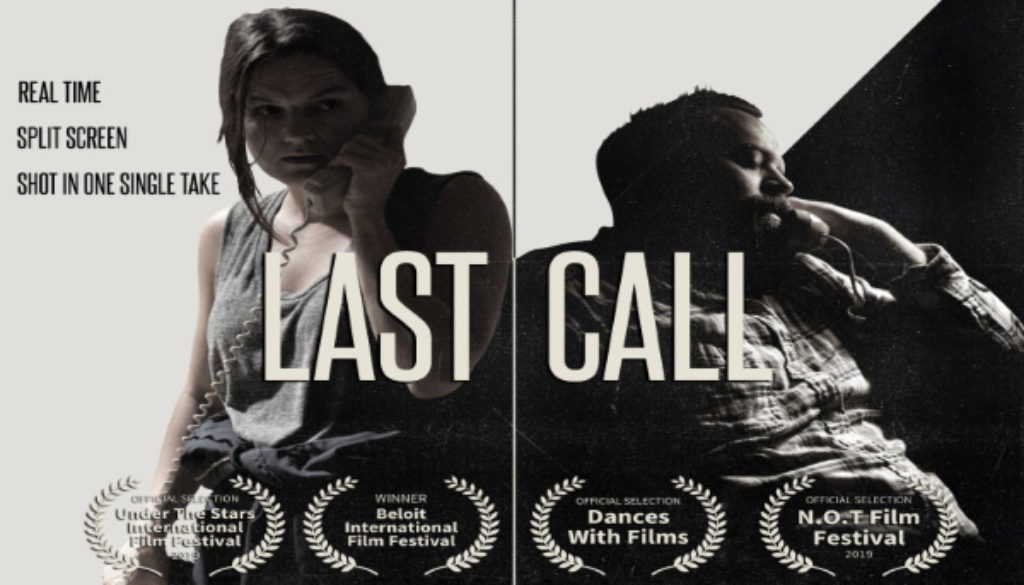 Many independent features can’t quite seem to find such a deep emotional parallel with its audience. Whether its the budget that doesn’t quite service the film or a script that hardly even skims the surface of its subject matter, this kind of truth is very difficult to find. And yet, Gavin Michael Booth has made one of the most potent and engaging low budget features I’ve seen in quite a while. Technically speaking, this is an experiment that couldn’t have gone much better than what he’s accomplished here. The split-screen and the one take aspect only force the viewer to fully engage, and if you allow that, you will be greatly rewarded.

LAST CALL is a marvelous film. It plays on many levels, and the themes of heartbreak and depression never feel forced or insincere. If you happen to be at a film festival, and you find this on the schedule, I highly recommend you seek this out. Beautiful, emotional and honest, there is so much to admire in this exceptional story that it’s well worth seeking out – especially for those dealing with their own feelings of emptiness and heartbreak.