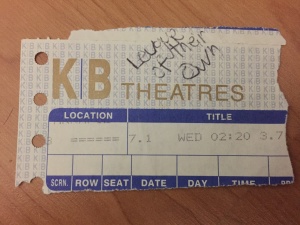 Nostalgic for the days the dot matrix printer was misaligned.

Feminist Fred may have been born when he saw Rene Russo in Lethal Weapon 3, but he still had a lot of growth to do. Rene Russo in action was my world, but I was not an athlete. A movie about women playing sports didn’t mean as much to me, and the historical significance of the real All-American Girls Professional Baseball League was lost on me. Of course women could play baseball. What’s the big deal? Sadly, I’d learn people still needed to be reminded. The great sports movies are universal. I already loved Rocky and laughed my ass off at Major League, but the themes of A League of Their Own would have to grow on me over the next 25 years.

A League of Their Own is about looking back on a special time in your life. That doesn’t have to be sports. For me it’s working at a movie theater from 1994-1997. That’s a job that still exists, unlike the AAGPBL women’s baseball league which was historic. But it wouldn’t be the same if I got a job at Arclight now as a 39-year-old man. The impact was having that as my first job, with other teenagers, a home that felt like where I belonged. Back then movies weren’t as readily available so having intimate access to five shows a day felt special. 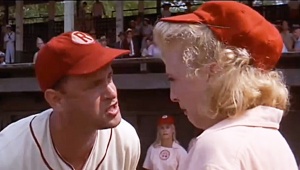 Say it with me, everyone knows the words.

God, film school felt like my whole world for four years. Now in the grand scheme of things it was only 1/10 of my life. It’ll be an even smaller fraction in another 40 years. Even the early days of my journalism career feel like a different world from the way things are done now. So yes, I can relate to Dottie (Geena Davis) looking back on her season playing women’s baseball during World War II. She only played in the AAGPBL for a year, but imagine the brief time frames of your life that have had the greatest lasting impact.

A League of Their Own uses the history of the AAGPBL to tell the story of Dottie and her younger sister Kit (Lori Petty), their coach Jimmy Dugan (Tom Hanks) and their teammates who all become self-actualized through the confidence gained by playing sports. Marla Hooch (Megan Cavanagh) finds true love and Shirley Baker (Ann Cusack) learns to read! Imagine only 75 years ago it was still common enough for an adult woman to be illiterate. I bet it’s still more common than we admit. 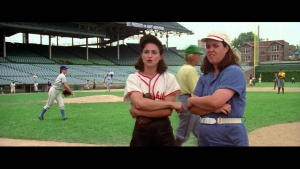 I can also appreciate a piece of four quadrant entertainment with something for everyone. Maybe that wasn’t quite edgy enough for Feminist Fred at Fourteen, but it was too edgy for my grandmother who found Jimmy Dugan’s language inappropriate. I imagine most of the elderly audience found it delightful, and remembered the real AAGPBL. Hell, a movie with major roles for nine women is historic.

But man, that final game is thrilling. Penny Marshall crafted a championship game that rivals The Natural. You know the Peaches are up by one and when Kit is at bat (she’s been traded to a rival team) they exploit her biggest weakness. A lot of it is built by Hans Zimmer’s score too. He really revs it up when Kit is circling the bases to make it feel like a rope is twisting tighter and tighter.

I always understood the ending of A League of Their Own to be Dottie dropped the ball on purpose to let her sister win. She knew it was more important to Kit, but of course couldn’t admit it or it would only hurt Kit more. I found that endearing but now I wonder if it was only enabling Kit. There are going to be things in life you’re just not the best at no matter how much you want to be, and sometimes no matter how hard you train. It’s important to learn that that’s okay and be able to deal with it.

Seeing grown up Kit at the end, it appears she either did get better or mellowed out about being the star athlete. I know some sports fans who were really upset about that ending because Dottie technically tagged her before she crossed the plate. I favored drama over sports accuracy even 25 years ago. 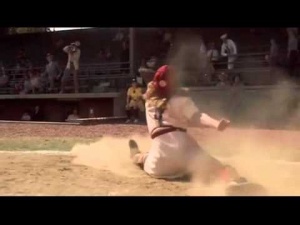 I was excited to see Tom Hanks do the dramatic side of Dugan. Nothing in Common hadn’t quite broken him out of the comedy typecast, but I knew he could do it. Still people were surprised again when he could do full on drama in Philadelphia the following year. To this day people are always surprised when a comedian does drama. How many Robin Williamses, Tom Hankses, Jim Carreys, Jamie Foxxes, Whoopi Goldbergs, Kristen Wiigs or Sarah Silvermans does it take to make people realize that actors can act? Now I wish Hanks would make a comedy again.

A League of Their Own remains the crowd pleaser it always was even after 25 years. It’s funny and heartwarming with memorable characters and a good message. But if you’ve lived some life in the last two and a half decades, it might give you a deeper appreciation for this sports movie classic.

A League Of Their Own 25th Anniversary: Feminist Fred Gets Nostalgic

[caption id="attachment_40325" align="alignright" width="300"] Nostalgic for the days the dot matrix printer was misaligned.[/caption] Feminist Fred may have been born when he saw Rene Russo in Lethal Weapon 3, but he still had a lot of ...
0
Average User Rating
0 votes
Please sign in to rate.