Premiering on Disney+ on August 21st is the new family film, The One and Only Ivan, which stars Bryan Cranston (Breaking Bad) and an all-star cast of voice actors including Academy Award-winners Angelina Jolie (Maleficent: Mistress of Evil), Sam Rockwell (Richard Jewell), and Helen Mirren (The Good Liar), as well as Danny DeVito (Dumbo), Mike White (School of Rock), Ron Funches (Trolls World Tour), Phillipa Soo (Hamilton), and iconic musician Chaka Khan. Directed by Thea Sharrock (Me Before You), written by White, and produced by Jolie, the film was originally set for release in theaters but has become a casualty of the Coronavirus.

Based on the children’s novel of the same name by K.A. Applegate, the film centers on a gorilla named Ivan (Rockwell), an aging elephant named Stella (Jolie), and a dog named Bob (DeVito), who all live at the Exit 8 Big Top Mall and Video Arcade, which is owned by Mack (Cranston). Ivan is the star of the show until the arrival of a baby elephant named Ruby (Brooklyn Prince), who Stella makes Ivan promise to take care of. With interest in the park fading, the circus’ janitor (Ramon Rodriguez) and his daughter, Julia (Ariana Greenblatt), give Ivan a painting kit and soon realize that the gorilla is a gifted artist. Now, with his new-found artistic fame, Ivan is determined to find a way to escape his confinement and lead Ruby, and the other animals to freedom, so he can keep his promise to Stella.

The press conference began with director Thea Sharrock addressing the difficulties of bringing author K.A. Applegate’s beloved novel to the big screen. “In terms of shooting this movie, it was very much like simultaneously working on two movies at the same time because of the technical aspects of it,” she explained. “So, on the one hand, we started the whole process with the voice actors because the animators needed their voices to begin to be laid down for the animation journey to begin. We started with that, then we shot all of our live-action stuff, and then we went back in and we shot the virtual aspects of the film, which was whenever we had just animals in the scene together. Those scenes we often revisited. We went back in and we did them several times just to get tiny changes in the actor’s voices and changes in their performances, and it made a huge change to the animators and what they were doing. So, in that sense, the technicality of it was certainly different than anything I had ever done before.”

Angelina Jolie, a respected filmmaker in her own right, explained why she wanted to produce this film. “One of my children read the book and said they loved it,” Jolie explained. “We read it and talked about why it is special and meant so much to them. I started to pursue what was happening with it, who had it, and if it was getting made. So, I started to get involved. Even with the early drafts, the script really started to become a simpler story, and I think this is one of the things that Mike did that was very special, was understand that it has heart. It’s not a light film, it deals with heavy issues. It’s charming and fun and full of life, but it’s deceptive in the packaging. I thought that was important and I wanted to get involved because I liked the message. I know that this young generation is very aware of what is happening in the world to our natural habitats, to these animals, what is happening in the Congo, what’s happening with the gorillas and the elephants, and they are angry. They want to be very clear about what kind of captivity is appropriate. So, I think this represents them and I think that is strong for them today to see that their actions can make change.”

“I feel like I was lucky because the book is so rich with characters and it’s so emotional and soulful for a children’s book,” Mike White added about writing the screenplay. “I think it needed a structure, like a lot of these adaptations where you just need more of a plot in a sense because the plot isn’t really front and center in the book. So that was the biggest challenge, just giving Ivan and Mack arcs. Mack’s arc is pretty solid in the book, but Ivan having an arc that is more classic as far as a Disney film would require. Working with Thea and everyone at Disney, I think that was our biggest challenge as far as adaptation.” 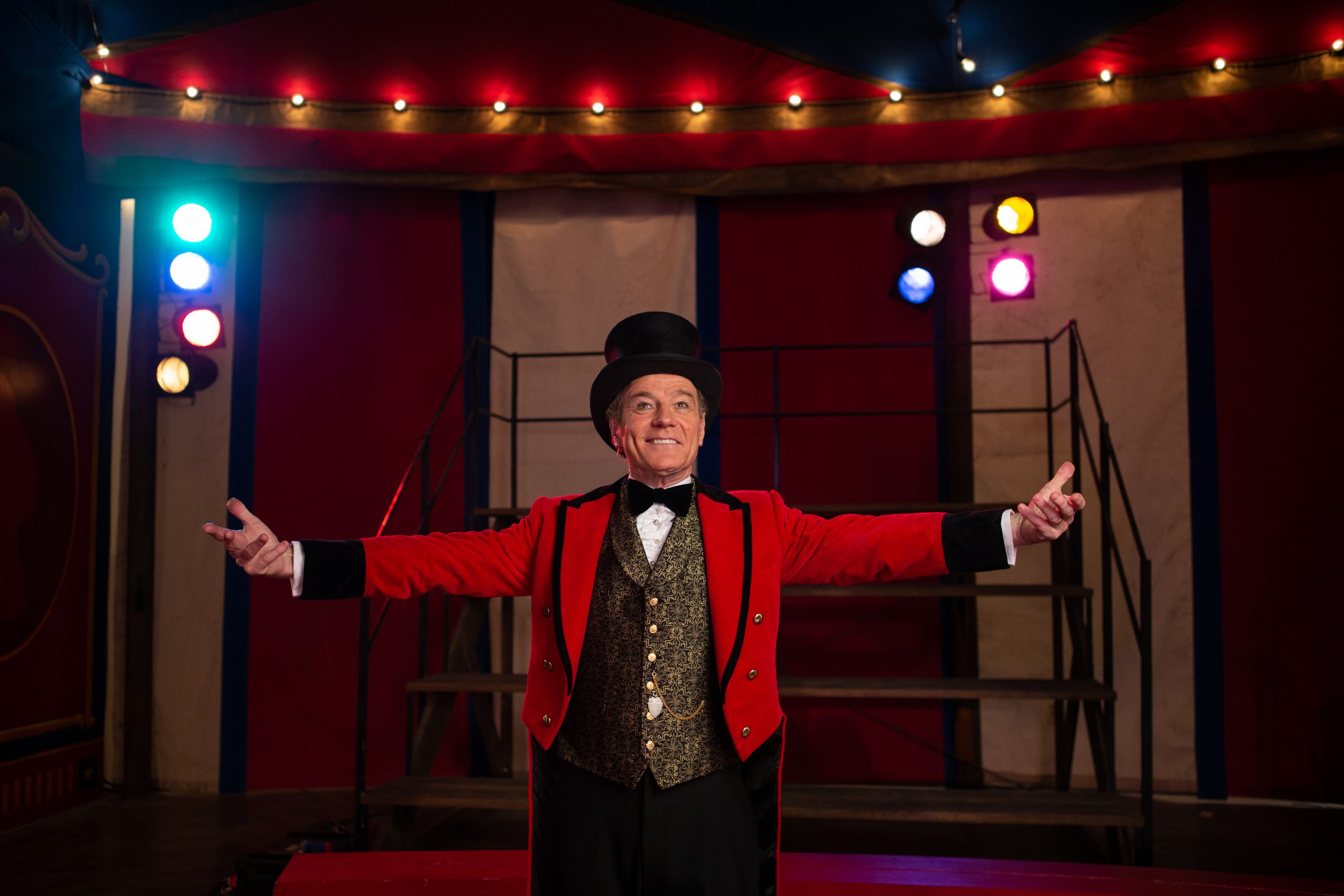 With most Americans socially distancing for the last several months, Sam Rockwell was asked what Ivan can teach us about captivity. “I don’t know the answer to that, but I definitely think Ivan has something to teach us for sure about isolation,” answered Rockwell. “The real story, if you have seen the documentary, it is really moving. It is a heartbreaking story, the real story. So, I’m sure Ivan would have something to say about it.” Danny DeVito voices Ivan’s best friend, a dog named Bob, and the actor explained his approach to the character. “I feel like the thing about Bob for me is that he always wanted a friend,” said DeVito. “He always wanted an older brother in his life. I don’t know if he is older than Bob, but I know he is bigger than Bob and that gorilla was his best friend. Bob always wanted a soft place to sleep and Ivan’s belly is just so soft. Bob would love to just sink into that belly, maybe eat a little piece of pizza first and watch some TV. Just let his eyes go and fall asleep with him.”

Phillipa Soo, who voices a parrot, and Ron Funches, who voices a rabbit, both discussed how they created the voices for their characters. “It was very simple. I thought to myself, what do parrots do? Aside from Gilbert Gottfried’s performance in Aladdin, I had to look up some parrot videos, and I did. Then I tried to squawk and make my most parrot type sound in my house for everyone else to hear,” explained Soo. “I don’t really have many voices,” added Funches. ‘I’ve only been acting for six years. So, I just did my voice, and then sometimes they would tell me to change it a little bit. Then sometimes Danny would tell me to try different things, and then I would say, okay Danny, you are very aggressive for your frame, so of course I will listen to you. Then that was pretty much it for me.” Chaka Khan, who voices a chicken, had a similar experience to Funches and discussed the advice that DeVito gave her on creating her character. “When I was recording, Danny said, do it more like how you would say it. So, my experience doing this part was to be me and find myself in the character.”

“It was a fascinating technical experience,” Helen Mirren, who plays a poodle named Snickers, said of making the movie. “That’s the amazing thing about our job, that we are always constantly being exposed to completely new experiences. I was in awe of the technical aspects that Thea had to be on top of. Her work is extraordinary. It’s funny I was thinking about nature, animals, insects, and diseases, they are so much a part of our lives. I feel that we are only at the beginning of our knowledge of actually how important the natural world is to us. But, I went down to my bird feeder for my entertainment and I was watching the squirrels and the chipmunks work it out between themselves. Then what happens is a big black bear comes along and takes the bird feeder away! Nature is not always nice.”

Bryan Cranston talked about his approach to playing Mack, and what subtle characteristics the actor was able to inject into the role. “I saw the character as a man who has flaws but also is attempting to make things right,” said Cranston. “Ivan was like a child to him and he wasn’t about to abandon his child. So, he wanted to figure out how to embrace the fact that he is now a full-grown Silverback Gorilla. We talked about it and I pitched the idea that Mack wears a wig and that at one point the wig would fly up and we would see that he is bald and that it embarrasses him. I also had a stomach pad to make him a little heavier, and a girdle for him to wear. So, those aspects of his personality that he didn’t want people to see, and how he was projecting himself as someone he wanted people to see but it wasn’t really him.” Ramon Rodriguez who plays George, Julia’s father, was asked what his biggest challenge was making The One and Only Ivan. “One of the greatest gifts and greatest challenges was Bryan Cranston,” Rodriguez confessed. “He is incredibly gifted and wonderful. He would break into Walter White every once in a while, and it was impressive.”

Ariana Greenblatt, who plays Julia, revealed that she actually drew some of the pictures that her character gives to Ivan in the movie. “When I had breaks during school I actually drew some of the drawings, like the one of Bob, and a few that you will see. It’s a really cool opportunity for me to put my own art in the movie, and it is something I will always remember too. I love art and painting, so I got to combine my animal-loving side and the artistic side of me,” said Greenblatt. Finally, Brooklyn Prince, who voices the baby elephant Ruby, talked about a special bonding experience she had while recording with Angelina Jolie. “I met Angie twice and the second time was at an award show,” explained Prince. “When I saw her there I said, hey, we should wear elephant onesies in the recording room. I asked my mom to buy me and Angie elephant onesies. When she came to the recording, I was there first, and it was hot, so I thought she might not want to wear it. Then she came in, saw it, and put it on. So, we got a selfie wearing our elephant onesies together. In the end, it did get hot, so we just wore them around our waists.”

The One and Only Ivan premieres exclusively on Disney+ August 21st