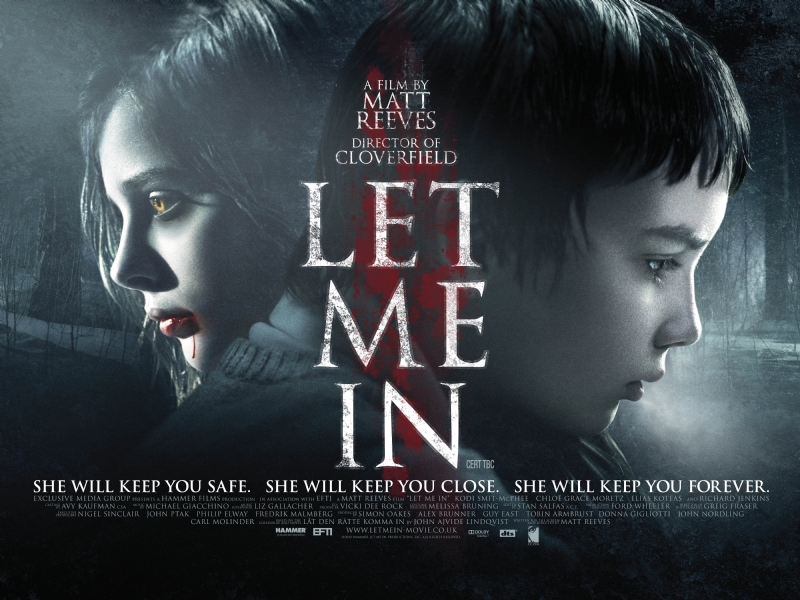 A unique vampire horror gem with a solid story and acting.

Let Me In follows a boy named Owen (Kodi Smit-McPhee), who is a outcast and gets bullied on a regular basis at school. To make matters worse, Owen lives a pretty depressing life at home with his mother (Cara Buono) who is constantly arguing with her ex-husband over the phone. One night, Owen notices a new family moving into the complex and wonders who they are. The following night while sitting in the park, Owen is greeted by Abby (Chloë Grace Moretz) who begins to talk to him for the first time. The two of them instantly form a bond and become close friends. The only issue is that Abby is not human but rather a vampire who needs to feed off humans in order to survive. An interesting and well made vampire flick ensues…

I have to point out right away that I have not seen the original Swedish film. I do realize that I should have before watching the remake but fear not, I have it at home and will watch it very soon. With that being said, I didn’t know what to think of Let Me In before I watched it. I wanted to see it just because Chloe Moretz from Kick-Ass was in it but other than that it didn’t make my must-see movie list. The reason why is probably because I am not a big fan of horror films as a whole because they are usually clichéd and stupid. I am also a little sick and tired of recent vampire films. This film, however, received solid reviews and intrigued me enough to see it. It’s not everyday that a horror film gets solid reviews so I knew this had to be somewhat decent. Sadly, Let Me In didn’t really do well in the theaters (no surprise there) so I had to rent it in order to see it.

Over the past few years, vampire films have become a dime a dozen. Luckily, Let Me In is one that truly stands out. Its nice to see that Matt Reeves actually took the time to create a solid horror film about vampires. What stood out the most about Let Me In was that it’s focus was on the “old” version of vampires. You know the ones seen before “Twilight” and “True Blood” flooded the market. Abby is not your typical vampire and that also adds to it. The character itself is very likable and you as a viewer feel bad that this poor girl has become a vampire. The bond that she shares with Owen is genuine and sincere BUT is also extremely believable. I think that was another key element of this film. In a lot of films, you see characters that don’t really fit with one another but Owen and Abby seemed to be a perfect fit for one another.

The scares in Let Me In were not the typical horror clichés that one may expect when watching a film like this. Matt Reeves relied heavily on the cinematography and scene set up to create the overall mood for the film. The movie was very dark and gloomy but that fit the film’s theme. By doing using these elements wise, Reeves set the mood for the film therefore making the scares work to the best of his advantage. The story also had several story-lines going on at once, which I felt kept the viewer always interested in and questioning what was going to happen next. The multiple story-lines included Abby and her guardian, Owen and the bullies, Abby and Owen’s relationship, and of course Owen’s home life. I also loved how the film’s story felt like a horror retelling of “Romeo and Juliet.” The screenplay was well written with solid character development.

Any film junkie knows that a screenplay is only as good as the actors you pick to play the role and if they have chemistry. There are really only two main stars in this film those being Kodi Smit-McPhee and Chloë Grace Moretz. Both of them shine in their roles and I am going to put this out there right now that Moretz is going to be a huge actress in the next couple of years. She is already skilled as an actress at a very young age. There were a few smaller supporting roles in this film including Richard Jenkins and the three kids who played the bullies. All of which played their part and played it well. I think in terms of acting for a horror movie, this was some of the best I seen. I know that isn’t saying much but everyone really nailed the role they played.

Let Me In is a breathe of fresh air for the horror genre and more specifically in the vampire sub-genre. I can’t really say how loyal this version is to the original but based on my research for the film, it is extremely similar with a few scenes being almost identical. I think Let Me In will end up being a cult classic for those who appreciate it as a well made vampire flick. I don’t think Let Me In will be loved by all because it is very dark, gloomy and a deeper than your typical horror flick. Those who like the True Blood take on vampires may or may not enjoy it. As a whole the film is not what you would expect from your average horror film but more or less what you would expect from a independent one. Its basically a character study focusing on a troubled boy who shares a special bond with a girl who happens to be a vampire. While its not for everyone, I know that as a film lover I thought this film was a great staple in the horror film library and will be a Blu Ray I will be adding to my collection.

MovieManMenzel’s final rating for a 7 out of 10.

‘Pirates of the Caribbean: Dead Men Tell No Tells’ Interview with Jerry Bruckheimer
May 28, 2017

Let Me In Review

A unique vampire horror gem with a solid story and acting. Let Me In follows a boy named Owen (Kodi Smit-McPhee), who is a outcast and gets bullied on a regular basis at school. To make matters worse, Owen lives a pretty depressing life ...
0
Average User Rating
0 votes
Please sign in to rate.