All My Life is a new film based on the true-life love story of Jennifer Carter and Solomon Chau. Their story made headlines and when you why it makes sense why director Marc Meyers wanted to tell their story. All My Life is without question a sad film but the focus isn’t on someone dying from Cancer but rather a statement about appreciating life and love. It’s a tearjerker but is life-affirming because it doesn’t sugarcoat what it is like to be going through something like this. This is a very realistic take on what one couple went through and their story in a lot of ways is universal to anyone who has ever loved someone who has passed due to a terminal disease. The film shows the highs and lows of their relationship. Some scenes are cutesy while others are very hard to watch. It’s a beautiful film and one that I strongly recommend to others.

After seeing the film last month, I had an opportunity to chat with the film’s stars Jessica Rothe and Harry Shum Jr right before Thanksgiving. We talked about how emotionally powerful the film is but also what it was like for the actors to step into these roles when they were based on someone’s actual story. Below is a full transcript of the interview and if you would prefer to watch the interview, you can click on the video above.

Jessica Rothe: So good to see you.

Scott Menzel: I am. So, this is a really touching movie. So I’m going to just have to come out and flat out ask it, how many times did each of you cry when you read this script?

Harry Shum Jr.: Oh my gosh. I would say like five times each act maybe. Just those little moments.

Harry Shum Jr.: Yeah. I think a lot of joy crying, a lot of sad crying, a lot of like, I wish I could do something to help cry. And then when we shot the film, then it’s another rotation of crying and in different ways.

Jessica Rothe: But it was really beautiful and I think actually quite cathartic for us and the rest of the cast and even the crew, because every single person who signed onto this movie shared at one point or another, that they had signed on because they had an incredibly personal connection to the story. Whether it was that they had also lost a loved one to cancer or battled their own disease, or knew a relationship like Jen and Saul’s or the beautiful, amazing friend group that rallies together. And so it was just such a life-changing experience, I think for everyone involved, incredibly cathartic, every time the dog, that was the thing in the script, the dog, every time I was done. Tears forever.

Scott Menzel: And I can totally understand that especially because I’m going to ask you something, you were filming this right after you got engaged, right Jess?

Jessica Rothe: Very shortly after. And I actually just got married two months ago. So it definitely helped put some things in perspective for me. And I hope helped me kind of slow down and breathe and treasure the moments that I’ve had with my now husband and our dog, whose name is Otis, which is the same name as the dog in the movie, which is bonkers. Can’t write that stuff. But love is amazing. I think that’s just the thing is love is amazing. And I feel so lucky that I was able to be part of the story that celebrates such a timeless, beautiful, huge, powerful love.

Scott Menzel:  Absolutely. And you did such an amazing job as always.

Scott Menzel: Harry, going back over to you, given the fact that this is based on someone’s personal story and not something that’s fictionalized, were you nervous having to play this person’s husband on the big screen?

Harry Shum Jr.: Yeah, absolutely. Just reading the script alone you’re like, oh, this is a beautiful story. And there’s so much hope. And then when it comes to the point where I was portraying and with a story that’s inspired by them, it became like, well, what am I doing? Okay. Am I about to go down this path? And for me, it’s like, what Jen really wanted people to see part of Saul is that he was a warrior. He was brave and his optimism could move mountains. And that’s what he did with his friends and his relationship with Jen. But you get to see both sides of this, the caretaker and also someone who’s battling this terrible disease. So all those elements kind of came into play. And then, when Jess talked to Jen heard her telling her that, please don’t try and mimic me. You have free rein to kind of just tell the story as you see fit and we wanted to still do it justice, but to have that blessing was really huge for us to go in there and really just try and do our best to get this story to on the screen.

Scott Menzel: Thank you so very much. It was a really hard movie to watch, but a very lovely movie and it’s life-affirming in a lot of ways. So thank you both for being part of it and happy Thanksgiving to you both. And hopefully, I’ll see you again soon.

Harry Shum Jr: Happy Thanksgiving and awesome collection in the back.

Scott Menzel: Thank you so much, man.

All My Life is opening in theaters on December 4, 2020 and will be available On-Demand on Christmas Day 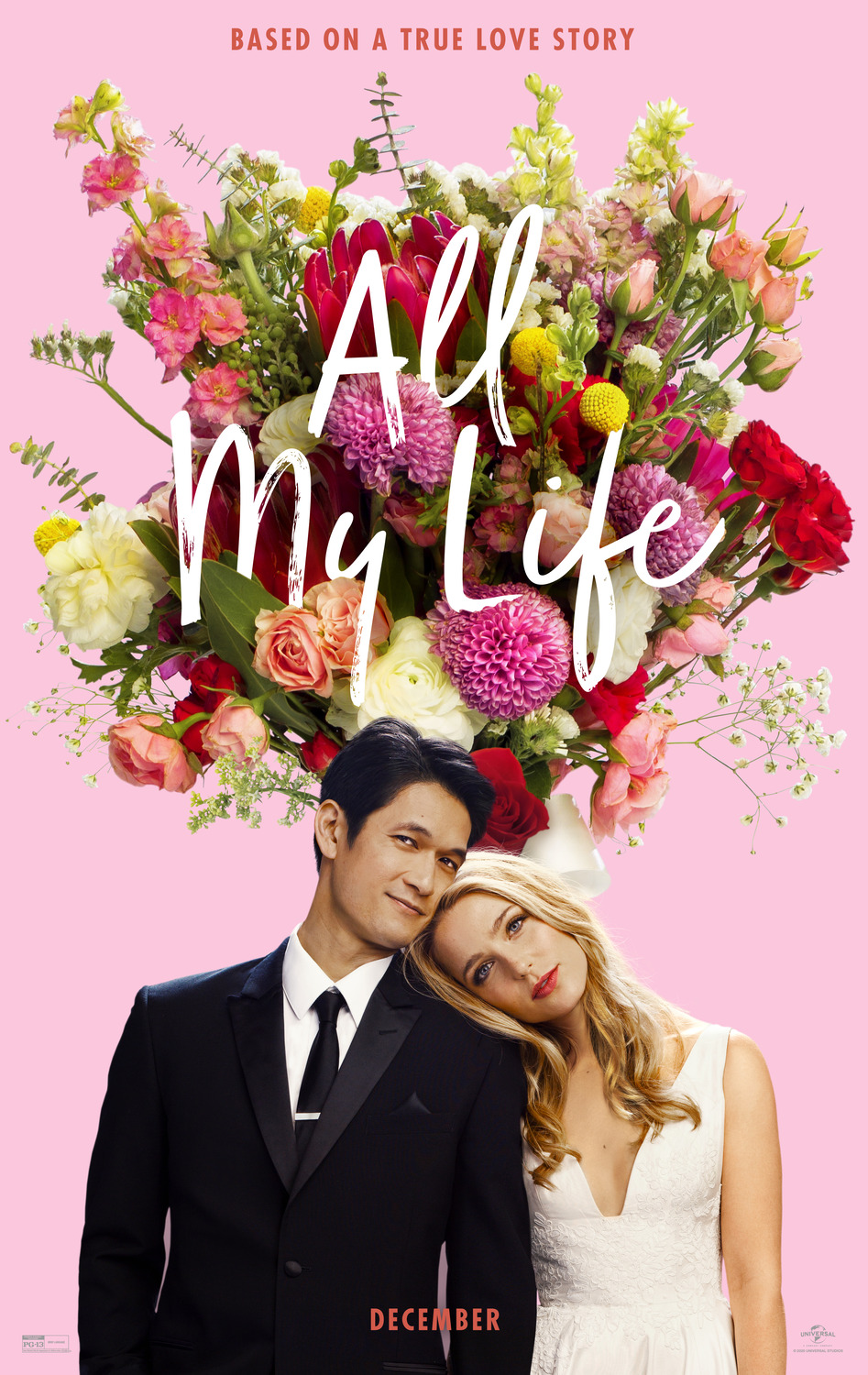