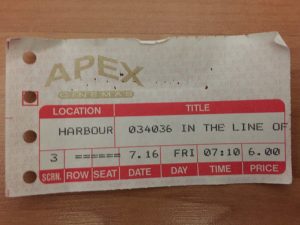 Had to see In the Line of Fire a week later because it was sold out opening weekend. Back then, movies sold out and you had to come back another time.

I don’t have many big revelations about this one. It’s an exciting thriller done right and I just want to commemorate its 25th anniversary. Clint Eastwood was hot again after Unforgiven, but this was a movie he didn’t direct. In the Line of Fire was just the perfect vehicle for an aging action star to still be tough and physical, with some realistic disadvantages, as opposed to Liam Neeson who’s still Superman.

Frank Horrigan (Eastwood) works for the Secret Service busting counterfeiters because that’s also what the Secret Service does. He was on JFK’s detail when he was assassinated in Dallas and it was a big deal that they put young Clint in the Zapruder film. Next year Forrest Gump met the presidents and now we have young Michael Douglas in Ant-Man. 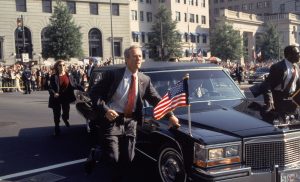 An assassin calling himself Booth (John Malkovich) calls Frank with his threat to assassinate the current president, so Frank is back on presidential detail. He’s got to run along limos huffing and puffing, but maybe he can redeem himself by putting himself… in the line of fire!

There are exciting pursuits but it’s more about the psychological game Booth is playing with Frank. He baits Frank with details of his failures protecting JFK. Malkovich is just so compelling you can literally watch him talk on the phone. The way he compromises his standing in the service is devious, popping balloons at a rally to make Frank look paranoid. Villains who are a few steps ahead are the scariest because we can’t deny we’d fall for it too. Human nature is frustratingly predictable.

The greatest scene is when director Wolfgang Petersen actually has you rooting for Booth inadvertently. When he’s loading his gun at the finale he drops the bullet under the table. We instinctively get nervous that someone will see the bullet and he’ll be found out. We forget for a few seconds that he’s the bad guy and we don’t want him to load that gun, but the cinematic language is “man drops the bullet he needs and must find it without being discovered” and it works just the same as it would for a hero. 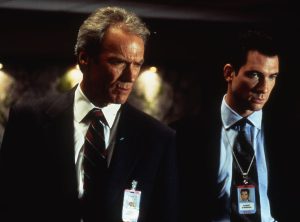 Screenwriter Jeff Maguire gives Frank some lines as quotable as anything Eastwood said in the Dirty Harry franchise. I know because my friend and I quoted “I know things about people/pigeons,” “That’s not gonna happen” and “If she looks back, she’s interested,” only in real life they usually didn’t look back like Lilly (Rene Russo). The best is Frank educating his partner Al (Dylan McDermott) about the word “cockamamie.” If they remake this maybe I can be the old timer explaining “on fleek” to the new generation who’s already come up with their own slang.

In the Line of Fire came out during the Bill Clinton presidency and Frank complains that the fictional president he’s protecting is no JFK. Eastwood didn’t write or direct, and it makes sense for his character, but we do know how critical he became of invisible Democrats sitting in empty chairs.

We were still trying to figure out the JFK assassination in the ‘90s. Oliver Stone had raised questions even if we discounted Jim Garrison. A remake could even be a cyber thriller about the techie who set of Hillary’s email server looking for redemption. 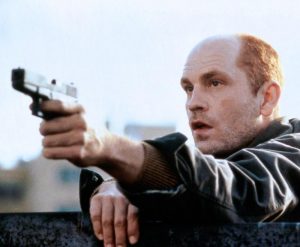 The CIA were keeping information about “Booth” classified. It’s 75 minutes into the movie before they share information with the FBI. That sadly became true in real life.

You know from Lethal Weapon 3 that Rene Russo is my favorite. In the Line of Fire is another key role for her. She’s a badass secret service agent but isn’t in charge of the film’s action. She’s a love interest for Frank and also combats sexist stereotypes in the office. I don’t know how equitable the secret service is today, but Lily had confidence and grace rising above her coworkers’ expectations. She sure rocks a pantsuit too! 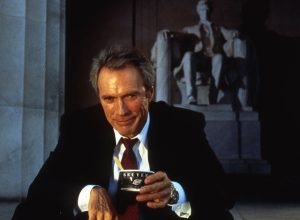 It sure is nice to see so much D.C. location shooting. I grew up in Maryland and only visited D.C. for day trips, so I’m familiar with it as much as it appears in establishing shots.

In the Line of Fire also made the acclaimed Petersen a summer blockbuster director, at least until Poseidon. He must’ve really landed in director jail after that one. His only movie since is a German film 10 years later. Eastwood continued to enjoy age appropriate leading man roles, mostly in his own movies, through 2008’s Gran Torino His role in Trouble with the Curve was a flop but he directed four more movies after that and seems to be starring in his next one. Malkovich became such a legend that they made a movie about a portal through his mind. Russo still gets lead or significant supporting roles.

They were going to do a TV series at NBC but then they didn’t. 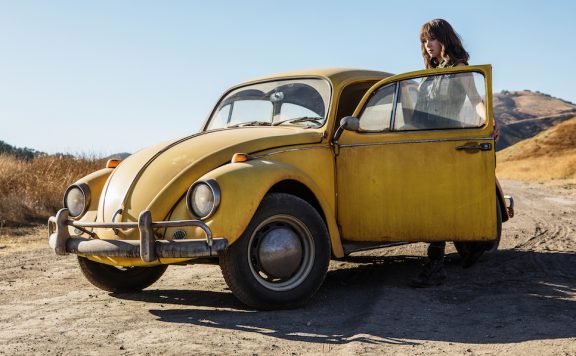 Bumblebee Review: The Fast and the Feminist
December 8, 2018