We Live 1001 is a new column from Audrey Fox, where she will be going through the Top 1001 Movies You Must See Before You Die list in chronological order. We’ll be covering a new film on the list every week. Pull up a chair, and let’s delve into some cinematic history!

The fourth film on our list is not, well, technically a film in the strictest sense of the word. Les vampires is a ten-episode movie serial, an opportunity for French director Louis Feuillade to experiment with long-form storytelling. The episodes varied in length (the shortest is around fifteen minutes, the longest an hour) and were released theatrically over the course of eight months, from November 1915 to June 1916. Les vampires is an early crime thriller — it follows the story of intrepid investigative journalist Philippe (Édouard Mathé) as he explores the seedy Parisian underworld while hunting for a mysterious crime syndicate known as the Vampires. 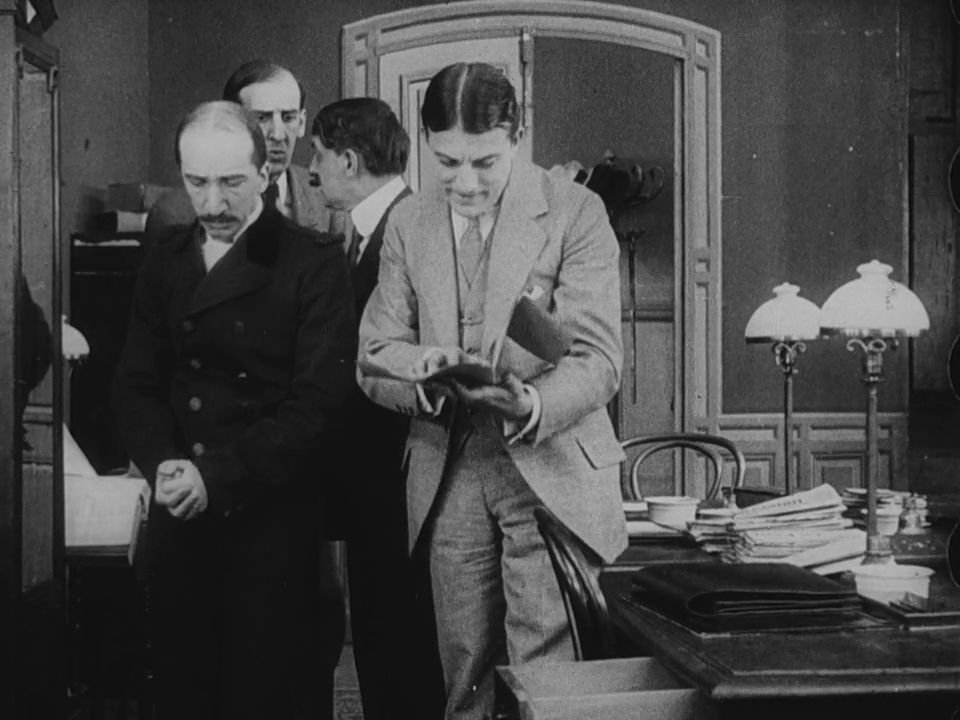 And honestly? It’s a pretty grisly affair! The first episode is called “The Severed Head,” and it absolutely delivers on that promise with major Se7en energy; and the fourth episode features a man who has been murdered and folded up accordion-style into a hotel safe. It might be surprising that this type of violent content was allowed in cinemas at the time…until you think about what else was happening in France in 1915 and 1916, and then it starts to make a lot more sense.

Audiences currently being traumatized by a seemingly endless war fought on their doorsteps would understandably be more receptive to films that depicted a darker, more cynical vision of the world. Indeed, there’s an eerie emptiness to the streets of Paris, as shown here, a constant reminder of current events of the time. Although there were initially some objections to Les vampires on moral grounds, it proved immediately popular among rank-and-file cinemagoers.

But let’s be honest: Les vampires begins as a bit of a mess. Its format is much more similar to television than traditional film, and like a lot of TV shows, it takes a little bit of time to connect with the characters and get a handle on the overarching plotline. The first episode throws us into the deep end, mid-investigation, and we spend most of it trying to play catch-up. But midway through the second episode and especially into the third, it really starts to hit its stride, where we’re more familiar with the formula, and it begins to be fun. All of the characters have a penchant for disguises and ludicrous getaways, which, despite Les vampires frequently grim subject matter, gives it an endearingly absurdist sense of humor. 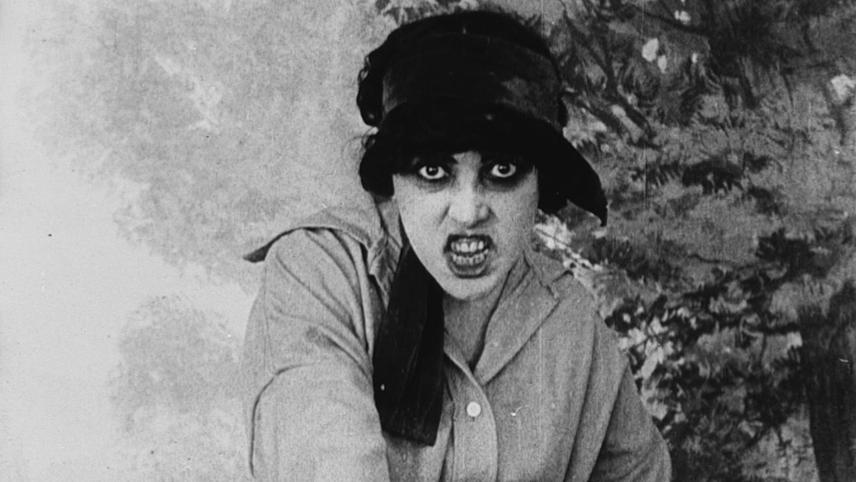 Each episode is paced energetically, moving at a steady click and packed full of twists and turns that require the audience to keep up. Our hero, Philippe, continually gets a step closer to unmasking the members of the Vampires, only to be eluded at the very last second. Irma Vep (Musidora), the main female antagonist featured as part of the Vampires, is especially engaging, and hers is one of the most recognizable faces from the entire serial.

That the idea of an amorphous underground criminal organization whose membership is a mystery but likely includes key figures from the highest echelons of French civil service would be appealing to filmgoers makes sense. French audiences were likely disillusioned by the war and considered its leaders implicated in the perceived military failures. If there was ever a time that audiences would be receptive to this sort of cynical, amoral storytelling, it would be amidst the unprecedented violence of World War I and its ensuing social upheaval.

Les vampires is not just notable for its quality, which, especially for the time, was quite impressive, but for its contributions to the evolution of long-form storytelling. Together with Judex and Fantomas, two other popular French crime serials from the same time period also directed by Feuillade, Les vampires creates a blueprint for the crime thriller, one whose influence is clear in a variety of different cinematic eras, from film noir in the late 1940s and 1950s to the emphasis on the amoral antihero in the 1970s. And what’s more, its ability to tell one more protracted narrative arc over the course of several episodes while at the same time featuring self-contained stories within each episode essentially paves the way for television as we know it. Radio establishes the concept of serialized dramatic storytelling, but Les vampires is instrumental in proving that such an approach would be visually coherent, engaging for audiences, and (perhaps most important) profitable for studios. 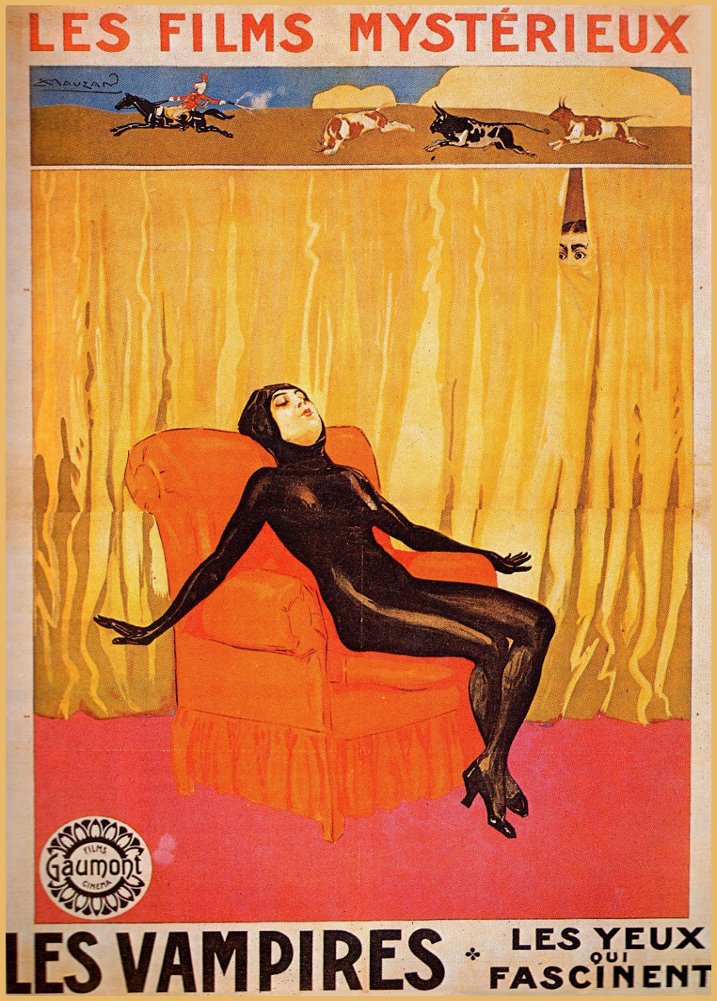 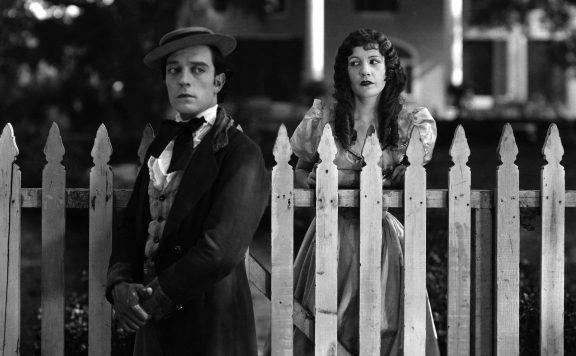