10 years ago, the Die Hard franchise entered the new millennium. It was controversial amongst fans but it instantly became my favorite Die Hard sequel. Die Hard is the Platonic ideal for an action movie, but for the continuing adventures of John McClane, Live Free or Die Hard stayed truer to the original than the previous sequels while showing where it fit in the modern world.

Die Hard 2 tried to repeat the same enclosed crisis in an airport. It was a little forced although it’s grown on me over the years. Die Hard With a Vengeance thought focusing on the characters would make it Die Hard even if the canvas was as big as the entire city of New York. Unfortunately, the Simon riddles never actually pay off (good luck figuring out how they solve the water jugs), and as fun as Samuel L. Jackson is, his character just makes obvious racial comments. The plot totally falls apart in the second half. I think the film was rushed to make a release date and the action is off balance, although for years I had myself convinced I loved it because I needed a Die Hard sequel to love. 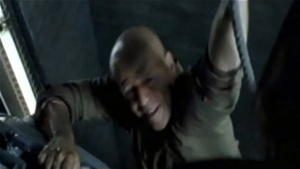 Live Free or Die Hard put McClane in a series of Die Hard situations. It wasn’t just one place for the whole movie, but we got Die Hard in an apartment building, Die Hard in a tunnel, and Die Hard in a factory. McClane improvises in each setting, and even climbs a good old elevator shaft, but an action movie in the 2000s wasn’t going to stay put in one location.

Action in the 2000s was going to be CGI enhanced too. The CGI actually complements the practical action in Live Free or Die Hard. There are still cool car and helicopter stunts. They just CGI the ones flying over Bruce Willis and Justin Long’s heads. The only shots that don’t hold up are the basic driving shots. The green screen looks really fake when they’re talking in a car. 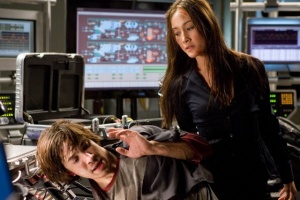 There was a concern at the beginning of the decade that you could not make any popcorn movie about terrorism ever again after 9/11. For better or worse, it did not take long for Hollywood to decide, “Yeah, we can.” The plot was presumably a modern techno-computer terrorist plot but really that could still come from the ’90s. The way the internet was used to influence politics proved to be much murkier and less action-packed than Live Free or Die Hard. The “fire sale” is more of an extension of the scary computer hackers from The Net.

A lot of fans feel the stunts are too outlandish. I feel this is simply applying Die Hard to the modern action aesthetic. Jumping off a roof tied to a fire hose isn’t realistic. It’s just the biggest stunt they could do in 1988. The Mack truck vs F-35 finale is one of my favorite action sequences ever. It’s pure bombastic destruction out of which McClane still has to fight his way. Plus, in his fourth adventure (plus all the cop drama we didn’t see in between movies), don’t you think he’s retained some skills that he can apply to every crisis?

Some feel McClane is too indestructible now because he almost bled to death running barefoot on broken glass in the original. He does get hurt in Live Free or Die Hard although it’s really only lip service to say he was injured crashing the car into the helicopter. If the glass scen was something you really related to in Die Hard, none of the sequels have attempted to give McClane near death experiences. So perhaps that is a key element you feel they’ve neglected. I like the scene but it’s not what I think of as inherent to Die Hard. Threatening the hero’s death in every movie would feel disingenuous anyway. Besides, I never thought he was going to die in Die Hard. Heroes persevere. That’s why we love ’em. Peril can take many forms. 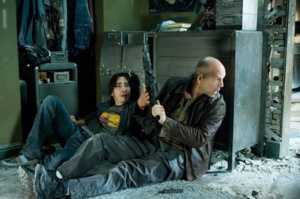 I never had a problem with it being rated PG-13. Since the ’90s, standards on violence got lax and plenty of intense movies were PG-13 like the Bourne series. Besides, James Bond and Indiana Jones were always PG or later PG-13. Language was never the defining trait of Die Hard to me either. Yes the catch phrase is automatically R-rated but now that we all know it, I think they came up with a clever solution to saying it in Live Free or Die Hard. Plus, I got to see busses driving around town with “Yippie Ki-Yay Mo-” on the side! They got away with that.

The argument that it should be consistent with the previous movies doesn’t resonate with me. Each sequel is its own movie. Besides, if an R rating is what it takes to make a Die Hard movie then A Good Day to Die Hard would be good. And it’s not.

More important to the Die Hard comeback was that the franchise was dormant. Bruce Willis had moved on to acclaimed movies like The Sixth Sense and the hit comedy The Whole Nine Yards (at least until its sequel) and had said he wasn’t interested in more Die Hard. I recall the idea that Armageddon was supposed to be his swan song to action movies, but I can find no record of that. Live Free or Die Hard felt like a gift. Whether it was the emerging franchise nostalgia market or Willis just needed a surefire hit, Franchise Fred wins. 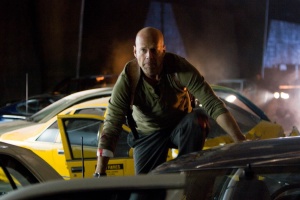 I didn’t think I could love a sequel title more than With a Vengeance. It was really fun to say it, and to add it to the title of any other movie sequel too. But Live Free or Die Hard had so much patriotic bravado I think it’s perfect.

The first three Die Hards were about John and Holly’s marriage. They reconcile in Die Hard, persevere in Die Hard 2 but are totally on the outs in With a Vengeance. Holly’s not really mentioned anymore but now that Lucy and Jack are grown up, I like applying the family estrangement to adult children. It’s similar but a different dynamic. The overprotectiveness that alienates them in regular life is exactly what they depend on in a crisis. 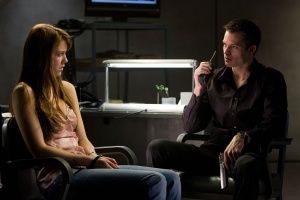 Mary Elizabeth Winstead is wonderful as Lucy. It’s understandable an adult woman doesn’t want her dad harassing her boyfriends, but in a crisis she takes after him. I’d love to see a movie where Winstead kicks ass as Lucy, but the moment she gives John a status report on the terrorists’ dwindling numbers made her the love child of McClane and Al Powell.

A Good Day to Die Hard is bad but one thing I like about it is Jack. He seems like a stubborn McClane kid, and I like that shooting bad guys together is how they bond. I especially like that in the climax, beating bad guys is no longer John’s first priority. It’s something he does for his children. That’s a believable evolution of a character. I still hope John and Holly can work it out in Die Hard 6. That’s important.

As soon as Live Free or Die Hard brought the franchise up to modern day, it only took the next sequel to make it a relic again. A Good Day to Die Hard does represent a movement in action movies, but it’s a bad one. It’s the shaky cam Die Hard for a post Greengrass world. We don’t need that. Pleas make Die Hard 6 some version of an action movie where you can see what’s happening.

But listen, I spent over a decade thinking I only had three Die Hards to choose from and only one of them was really good. 10 years ago, I got to say there are two great Die Hard movies. That even allows me to appreciate the fun elements of 2 and 3 even more, since they’re not the last words on John McClane.

10 years ago, the Die Hard franchise entered the new millennium. It was controversial amongst fans but it instantly became my favorite Die Hard sequel. Die Hard is the Platonic ideal for an action movie, but for the continuing adventures of...
0
Average User Rating
0 votes
Please sign in to rate.