There are some moments in a young cinephile’s life that will never be repeated. You’ll never have another first time at a movie theater, and the first time my parents let my friends and I sit in a movie unsupervised was huge. Young Franchise Fred loved when a big sequel would come out and I got to rent the previous ones on video. That won’t likely happen again as I’ve caught up on all the ongoing franchises. Another magic time was when I finally got brave enough to watch horror movies and then I had an entire new section of the video store from which to pick. The Lost Boys, turning 30 today, was pivotal in that discovery. 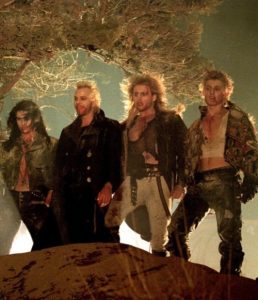 Looking back, I was pretty brave to start diving into horror at 11. I did have friends pushing me, so it was 1988 that I got to go back and see classics for the first time. By classics I mean Nightmare on Elm Street, Friday the 13th, Halloween, Dawn of the Dead and Re-Animator. I was still a child of the ’80s. I had only just missed The Lost Boys in theaters a year prior but a friend’s recommendation led me to discover it. On VHS. So it was to be another 10 years before I saw the entire movie in a proper widescreen DVD. Today, young horror fans have an added 30 years of great film, and most of it is available in the proper aspect ratio.

Sam (Corey Haim) and Michael (Jason Patric) move to Santa Carla with their single mother Lucy (Dianne Weist). Michael is welcomed into a gang of punks who turn out to be vampires. Sam makes friends with Edgar (Corey Feldman) and Alan Frog (Jamison Newlander), who show him vampire comic books and teach him the rules when he catches his brother’s reflection, or lack thereof, and ability to fly. 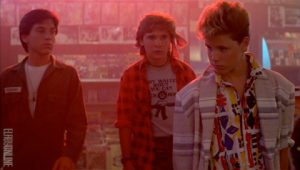 The Lost Boys fulfilled my recurring fantasy about having an adventure with my friends. It could be fighting vampires or looking for pirate treasure. I think I believed the Frog brothers knew what they were talking about, because as a kid you trust other kids. Now I see they’re as bumbling as my friends and I were pretending to be Ghostbusters, trying to build a time machine without a DeLorean or trying to bring a Barbie doll to life with electricity (how did we not burn the house down?).

These kids get to fulfill their fantasy though and actually slay vampires. Prepping the house for the vampire siege is like a pre-Home Alone. The dog gets the best slaying, knocking a vampire into a bathtub filled with holy water.

I guess I still relate to Sam. I never fell in with a dangerous crowd like Michael, although that could be someone else’s experience. Maybe I should relate to Michael because I was an older brother. There is something about being the first sibling to transition to adulthood and the younger siblings feeling left behind.

Kids could certainly relate to Lucy dating a new man (Edward Hermann). That also was never my experience but I had many friends whose parents were divorced so I could appreciate the metaphor of suspecting the new guy was a monster.

This was the first time I’d ever heard the rule about inviting a vampire in. That proved educational for future vampire viewing, especially Buffy and Angel. Somehow I already knew about garlic and holy water at age 11. I guess there were plenty of Dracula spoofs I would have seen, including Count Floyd on the Ed Grimly show. 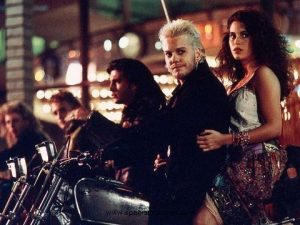 Santa Carla also reminds me of the Ocean City Boardwalk my family visited every summer. There was always the hope of finding a summer romance, or at least discovering some cool artifact in a shop. Real life was never as exciting as the movies. Today I could find anything I’m looking for online without leaving the house, but Michael met Star (Jami Gertz) and Sam found cool comics and vampire weapons so that gave me hope. 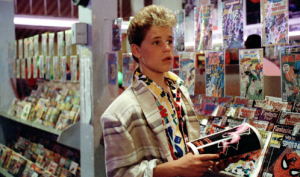 Watching The Lost Boys in 2017, the comic book shop is a museum of old comic book covers. The video store where Lucy gets a job is even more of an artifact, with a European Vacation standee because that was Warner Brothers’ new release at the time of filming. Synergy! There’s also a Video Review magazine on display and I trust that was a real industry mag in the ‘80s. I can’t even find an old one on eBay now.

The Lost Boys is still a fast paced romp full of action and gore. It did technically become a franchise too. There are two straight to video sequels in which Feldman and Newlander return as the Frog Brothers. Plans for a Lost Girls never materialized, but it seems like now would be the time for a gender swapped reboot.