Sometimes audiences need a reminder that it’s okay for a movie to just be a movie, now and again. Pixar’s Luca is undoubtedly a work of love for all involved in its production, but compared to other efforts, the resulting film does seem to have less to worry about in terms of stakes. While this breezy summertime charmer is perfectly fine for all audiences, that’s not enough for some that expect the acclaimed studio to either knock out classics or take a walk every time they release a film. Regardless, Luca plays an enjoyable coming-of-age story with one foot in the water and the other placed in fantasy.

Set on the Italian Riviera somewhere around the 1950s, the film follows Luca Paguro (voiced by Jacob Tremblay), a sea creature who has never gone above the water. He soon meets another boy, Alberto Scorfano (Jack Dylan Grazer), who frequently visits the surface. Luca begins following his lead, only to discover that when dry, he takes on human form. Eventually, the two make their way to a nearby town, Portorosso, where they find themselves learning all about human life during an eventful summer.

Once understanding the central arc of this story, which involves accepting one’s differences and the positive implications of this, there’s little else to the plotting that hasn’t been explored before by Pixar. This is not a major issue. Reinforcing solid messaging is not a bad thing, and writers Jesse Andrews and Mike Jones have found a tale of friendship that proves itself to be endearing enough. Really, the more impressive qualities of Luca come from what director Enrico Casarosa and the talented team of animators and more bring to a story rooted in culture and folklore. 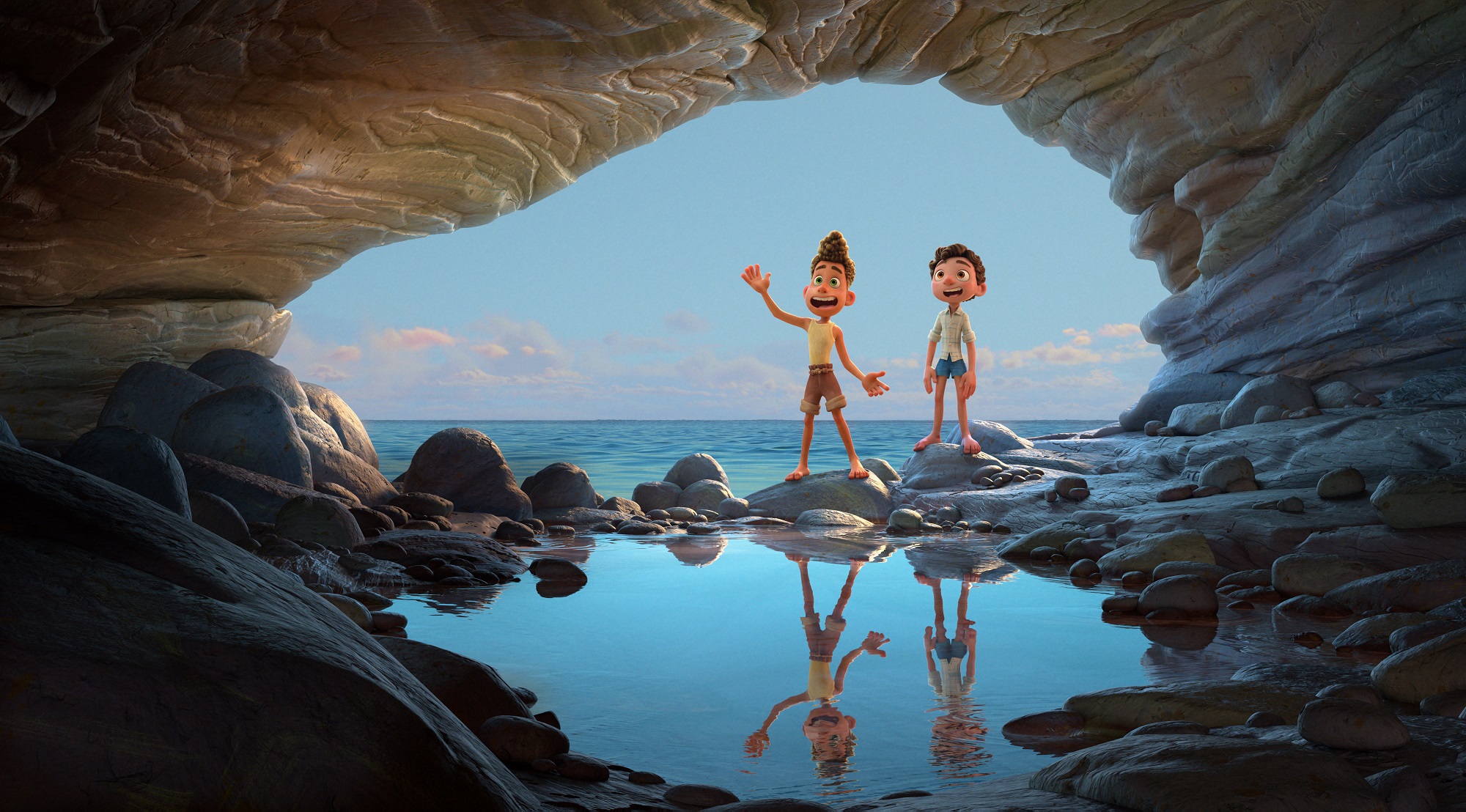 No, Luca is not revealing the untold story of sea monsters, but it’s hard not to see the attempts to capture the spirit of the great Hayao Miyazaki’s animated efforts when it comes to exploring the fantastical. Whether it’s the American sensibilities of Pixar as a U.S.-based studio or the lack of a desire to push further into the abstract, it does feel as though the film stops short of fully embracing the “do anything” nature of animated fiction. However, as a film that puts the studio closer than ever to functioning as an homage to Studio Ghibli’s films, I did have enough to appreciate.

An even further reach is attempting to place Luca as a Federico Fellini film, another key influence on the visuals. No, Luca is not trying to be Amarcord or La Dolce Vita, but this family-friendly picture does have a good eye on not only the use of color but the way lighting is used or the focus on architecture design. Even the apparent self-reflection from director Casarosa has its role to play in providing subtle nuance to some of these characters, aided further by Dan Romer’s terrific score.

In combing the seaside town with wonderfully designed sea creatures that can transform themselves, it’s of no surprise to see such a good handle on making this animation feel lively. It would be nice to see a push away from some of the stock character designs, as it often feels like The Incredibles is the only Pixar feature to really move in unique directions in that regard. However, the creature design, in particular, is excellent. Were the story to play more in the monster movie sandbox, I could see more weight added to the ultimate goals of these characters. 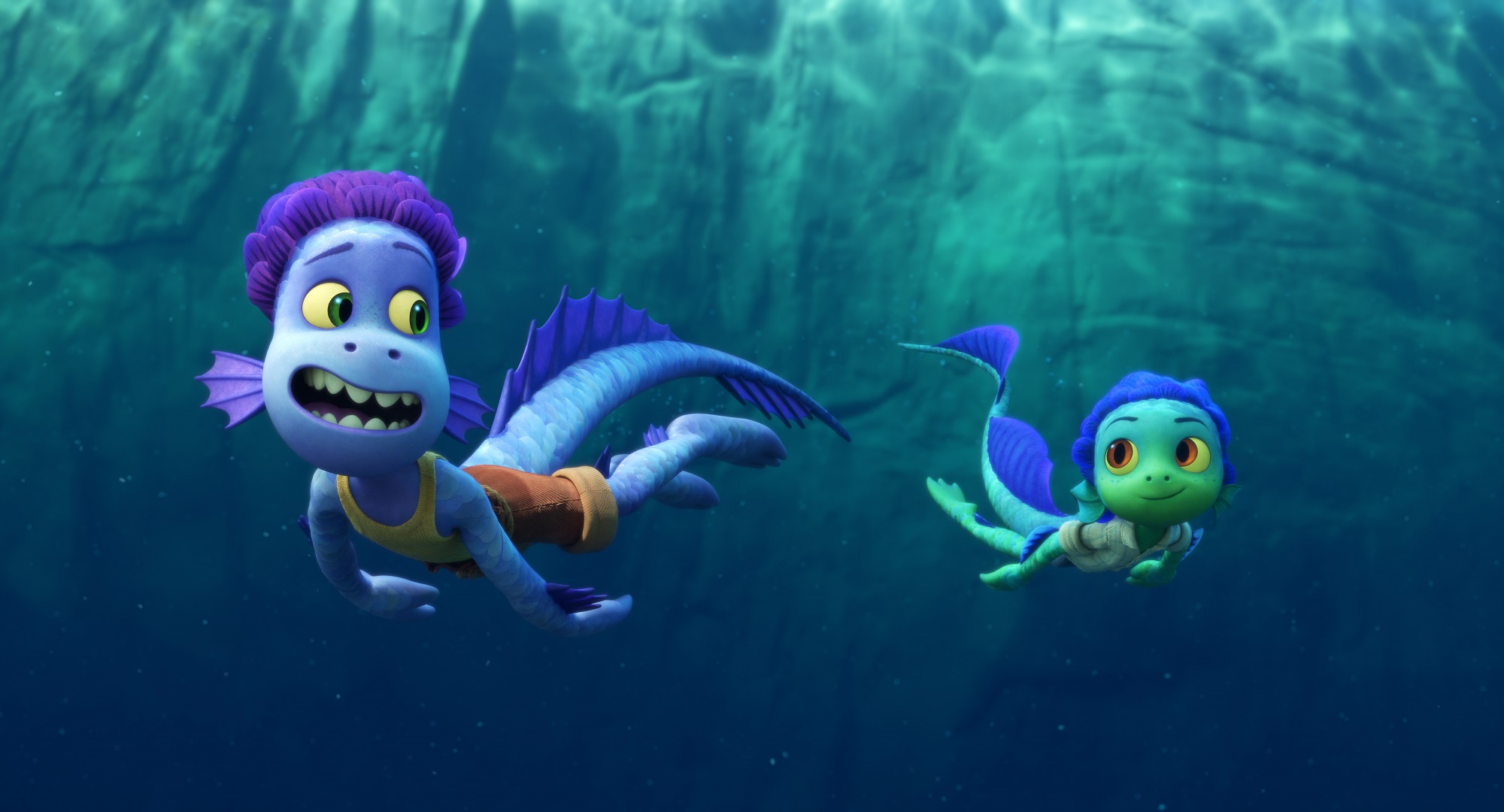 As it stands, there is a sense of ease to how things play out. Not atypical for Pixar, Luca does find a way to feel more emotionally resonant towards its final minutes. Still, even the climax and its fallout have a resolution achieved in a more straightforward way than I would expect for the studio. But is it enough for the film to be average in some of these areas?

The key thing is that I like Luca, and I like the character of Luca. I also like his friends and the people he meets. Alberto is enthusiastic and boastful, but he only boasts as a way of spreading a sense of joy to others. He’s a major part of the film’s celebration of friendship. Emma Berman brings additional charm as Giulia Marcovaldo, the young Italian girl who befriends the two. Her father Massimo, voiced by Marco Barricelli, is also quite enjoyable in how he subverts certain expectations.

Others pop up as well. Some Italians (Saverio Raimondo does well as a pompous blowhard), and some non-Italians (Maya Rudolph and Jim Gaffigan are still a delight), but it’s another example of Pixar working with actors that fit the part, as opposed to the biggest names available. The key factor is the way the film builds a unique world within such a small location. Luca is not a large-scale film. It may actually be one of the smallest when looking at how far these characters actually travel. However, there is an admirable attempt to showcase the heart of this location. 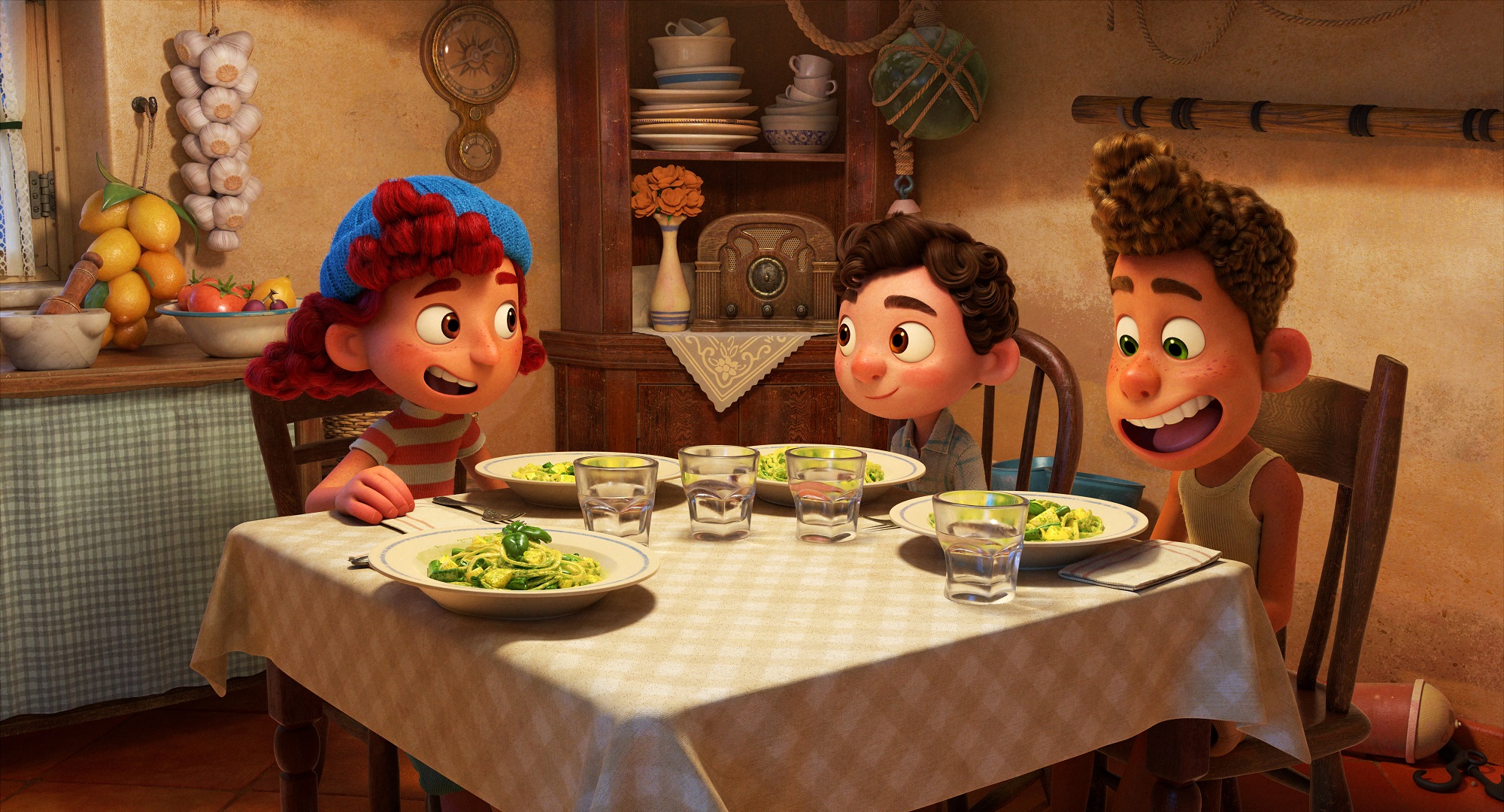 Through the eyes of Luca and Alberto, we see these two not only experience human activities but find delight in them. They have dreams of owning a Vespa. Their first taste of pasta and gelato are heavenly experiences. The chance to explore new things only inspires them to want more of what the world can offer as they figure out how to balance their place in the world. Were the film to hit stronger on its key metaphor, I could easily see Luca serving as more of a call to action for some. As it stands, it’s aiming lower and still delivers on a different level.

Perhaps Luca is not as delicious as the pasta dishes the two young sea monsters eat up so quickly, but the film is far from old lasagna. The film has fun ideas, enjoyable characters, and a fantastical side that I only wish the film could have embraced more. Still, Pixar has produced many greats and functions as a studio that continually wants to challenge itself, particularly with these original attempts. Luca may be on the lighthearted side, but it’s pretty fit as a fun flick to relax to. 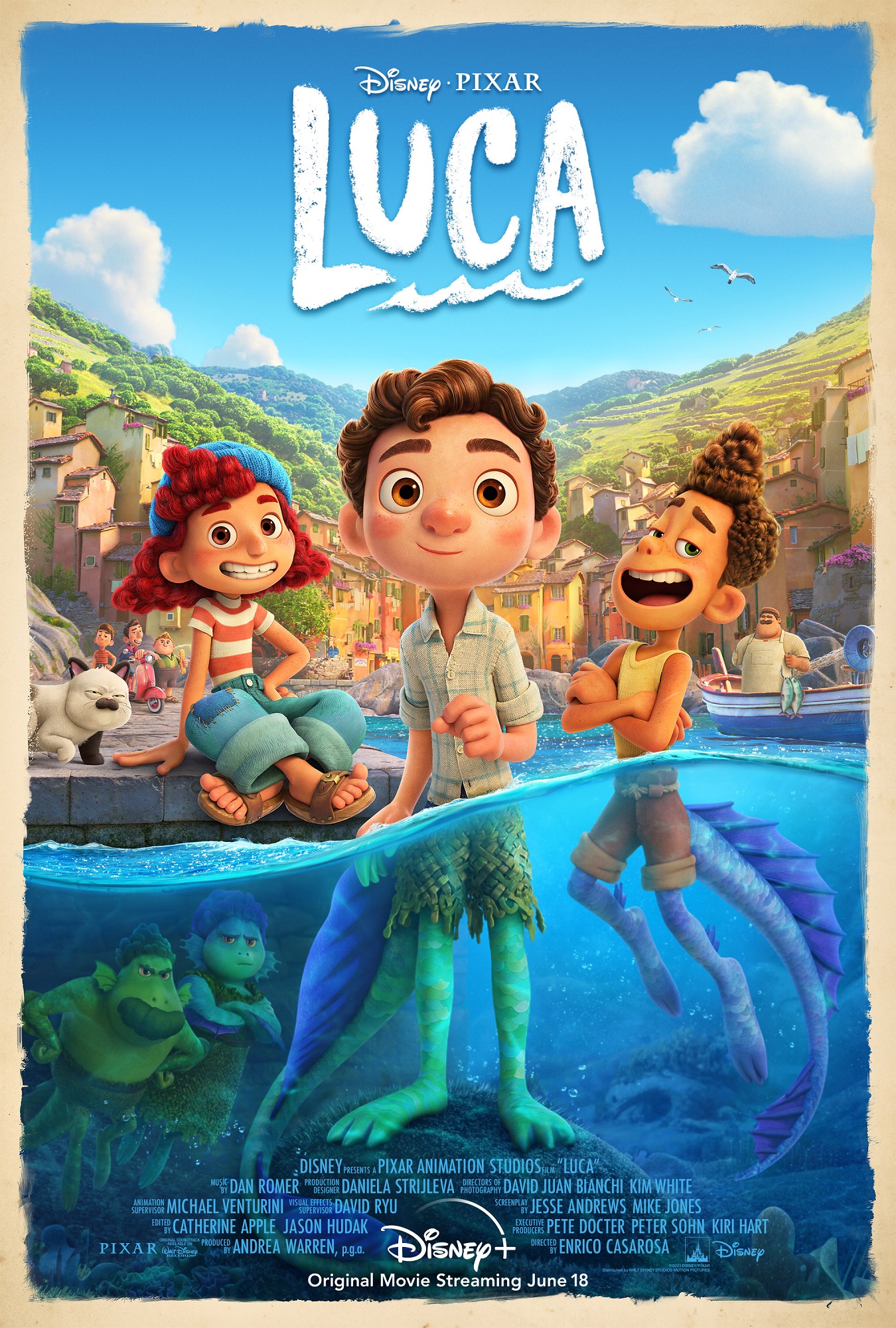 ‘Luca’ Review: The Shape Of Pixar 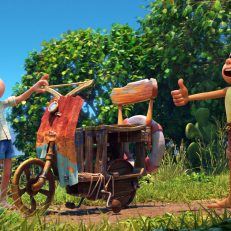 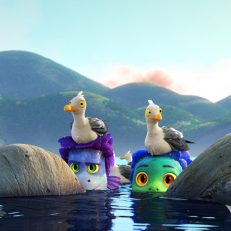 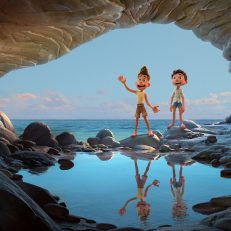 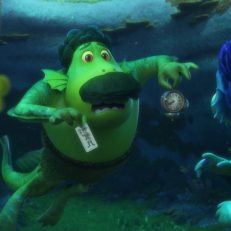 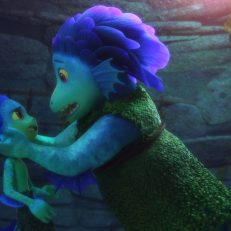 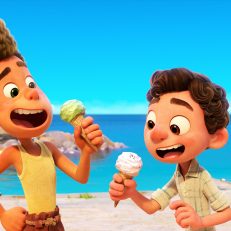 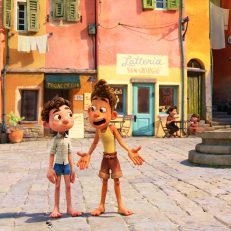 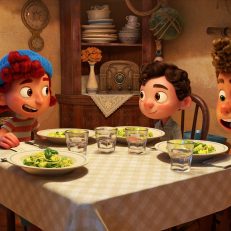