Madea unites the family and takes down racial discrimination all before Christmas dinner.

A Madea Christmas is the 8th installment of the stage to film series, which features the Madea character. In this latest outing, Madea gets suckered into going with niece Eileen (Anna Maria Horsford) down to Alabama to surprise her daughter Lacey (Tika Sumpter) for Christmas.  During their unexpected trip down to Alabama, Madea tries to keep the peace as several family secrets are about to be revealed just in time for the holidays.

Unlike a lot of white men, I actually love the Madea character and feel that the majority of these films are a fun time at the movies. Are they cliched? Yes. Is the acting for the most part mediocre at best? Yes.  However, when I watch a film like Madea’s Christmas, I don’t expect it to be anything amazing but instead, I expect it to be light-hearted, fun, and cheesy entertainment, which is usually exactly what I get from them. I will say, however, out of all the Madea films to date, I feel that A Madea Christmas is probably one of the best and actually addresses a few social issues.

While most people label Tyler Perry movies as movies for “black people,” I completely disagree with that statement and feel that Perry has really been trying to make his last few films appealing to other racial groups. In Madea Christmas, a big part of the story-line revolves around racial acceptance and having a mixed race relationship. Now, while this topic doesn’t mean a lot to someone like me, who is from a mixed race area in New Jersey, grew up with 4 black brothers, and has dated a black girl,  the truth is racial issues are still very much alive in many areas. In Alabama, as backwards as it may seem, people still have issues with black and white people dating. I felt like this film did a good job of really addressing this issue from both sides of the equation and while it was very “Hollywood” come its conclusion,  I still think it brought up good points.

The acting in most of Perry’s films especially the Madea movies is honestly the weakest link for me. I usually can’t get past how bad some of the performances are. This time around, however, I felt that they were above average for the most part, which says a lot since this film has Larry the Cable Guy in it and I usually despise that man with a passion. I think Tika Sumpter was great as Lacey and Alicia Witt, Eric Lively, and Kathy Najimy were all good in the smaller supporting roles.  Again, I am not saying that the performances are amazing, but given the fact that I have seen about 10 or so movies written and directed by Perry, this one has some of the best performances that I have seen from his films. The only Perry movie that has top notch acting is the Family that Preys, which I also feel is his best film.

Now with all the other cast members put to the side, lets get to what everyone wants to know; how was Madea in the film? Well, first and foremost, I have to tell you that the marketing for this movie lies. There is no Madea as Santa Clause. It doesn’t happen so sorry to bust your bubble with that, but with that being said, Madea is in top form here. I really felt that the vast majority of her jokes and one liners were really funny and there were even a few where I laughed out loud.  Madea is really a significant character this go around and most scenes with her were highly entertaining. I particularly enjoyed one scene where Lacey leaves her in the classroom with her students and she tells them about the first nativity.

All in all, if you are a fan of the Madea movies, well I think this is one of the best ones to date. If you aren’t and want to give one a shot, I would suggest this one since its one of the better of the bunch.  I really liked the story and even if some of the jokes were a bit too race driven for my taste, I do feel that by the time the movie came to a close that it left me  smiling and feeling good.  If you want to see something fun and lighthearted this weekend, well I would honestly say give A Madea’s Christmas a go.

MovieManMenzel’s final rating for A Madea’s Christmas is a 7.5 out of 10. 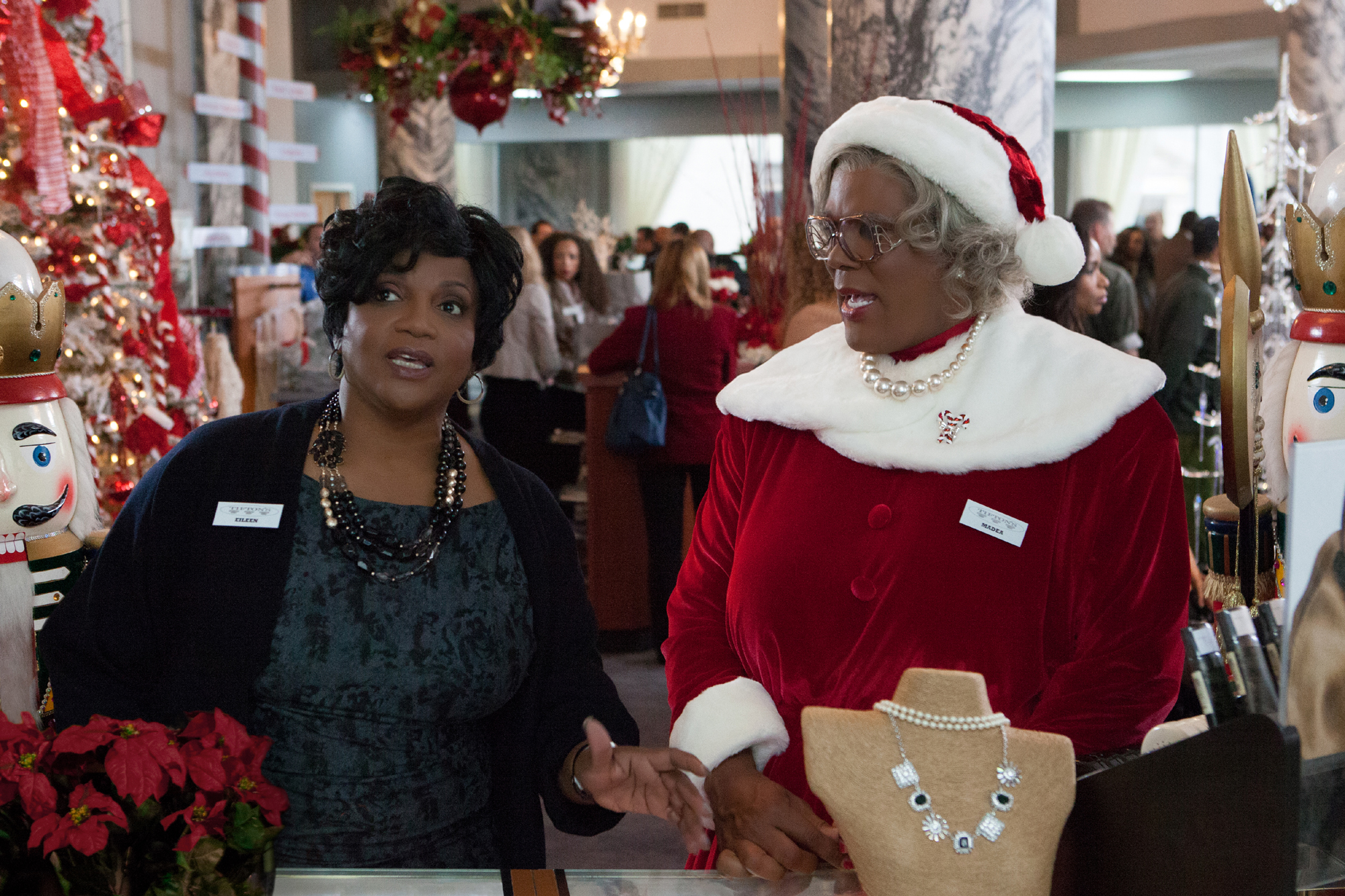 “A Madea Christmas” – Review by MovieManMenzel

Madea unites the family and takes down racial discrimination all before Christmas dinner. A Madea Christmas is the 8th installment of the stage to film series, which features the Madea character. In this latest outing, Madea gets suckere...
0
Average User Rating
0 votes
Please sign in to rate.