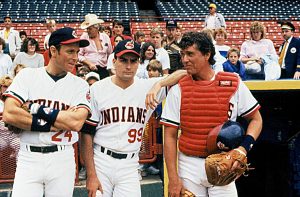 Major League was one of my favorite comedies growing up, and it turns 30 today. I saw it in theaters (but unfortunately two years before I started saving my ticket stubs) and then over and over again on video, HBO and when I taped it myself off HBO. The underdog movie is universal and the sports comedy is a prolific genre, but Major League is the height of both.

The specific plot of Major League is that the league contract allows Rachel Phelps (Margaret Whitton) to move if attendance drops. So tries to assemble the worst team possible to drive fans away. Her Cleveland Indians don’t just suck, they’re engineered to suck. So they have to not only learn how to play baseball, but overcome a villainous owner who wants them to fail. 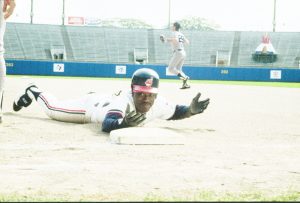 There are plenty of shenanigans, like the team carrying Willie Mayes Hayes (Wesley Snipes)’s bunk outside at training camp. Any time you got a bunch of guys together in an ‘80s comedy, shenanigans would ensue. 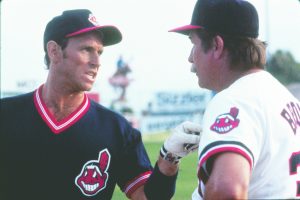 There’s physical comedy, like when Hayes slides too short to reach the base, Cerrano (Dennis Haysbert) flings his bat, lots of bumbling on field. Lou (James Gammon) peeing on Dorn (Corbin Bernsen)’s contract probably counts as both shenanigans and physical comedy. That made 12-year-old Fred laugh, as it did when Lou tells Hayes, “You hit like shit.” You see, because that rhymes.

Like a good underdog, the Indians gradually figure out each player’s problem. Ricky “Wild Thing” Vaughn (Charlie Sheen) needs glasses. He’s pitching badly because he can’t see that far away. What a sensible solution, and it becomes his trademark. 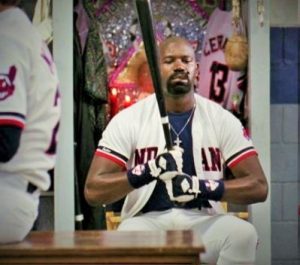 Voodoo is probably racist but seems good spirited. The guys who make fun of it are the assholes and Cerrano always gets the better of them. Is it any more racist than the Cleveland Indians’ name and mascot themselves? The Japanese groundskeepers are probably ok. They’re just doing their job talking baseball in their native language. The subtitle does make it funnier.

The nudie Phelps standee is surely sexist. It also raises so many questions. I guess she may have been a bikini model or they photoshopped her on another body (with an actual photo shop in the ‘80s.) 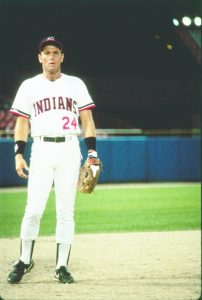 The women aren’t treated great in Major League all around. Dorn’s wife (Stacy Carroll) is there to get cheated on and get revenge by sleeping with Vaughn. Dorn puts their differences aside during the big game but what are the implications here? Bros before hos? The woman is just a commodity to be traded between them? And when they win, then Dorn punches Vaughn, but they make up right after. No hard feelings. I defend my property but the team is what’s important. I mean, this is rather mild and unconsciously ‘80s but it’s a layer that 30 years of growing up makes me question today. 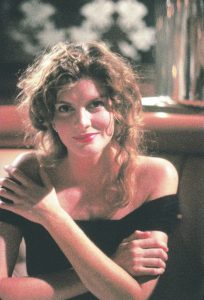 This would’ve been the first time I saw Rene Russo and she fares the best. It’s clear Harris (Tom Berenger) was not a good boyfriend to Lynn (Russo). He cheated on her but he wins her back like she’s his prize. He doesn’t really do any work for it. I maybe believe he’s sorry he cheated and knows what a good thing he ruined, but I also wonder if he’d chase after her if he hadn’t been hired by a Cleveland team. If he played for Oakland would he make the effort to go Midwest and get her back? She just shows up after the big game having dumped her fiancé. It’s a happy ending but what is this really saying? No wonder it took so long for Impressionable Fred to become Feminist Fred. 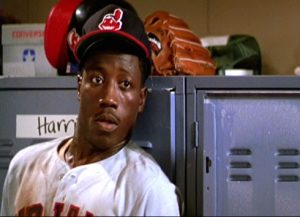 Snipes became the biggest star in the cast, so much so that he was unable to return for the sequel. At least that’s the story. He probably rightfully commanded too high a payday for the sequel’s budget. Haysbert of course became a respected dramatic actor and more than a decade later became one of the most famous fictional presidents. It’s fun seeing Neil Flynn as construction worker fan, a bit part for a working actor who later became a mainstay on Scrubs and star of The Middle. 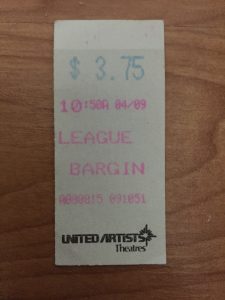 Major League II, which came out 25 years ago last week, was a highly anticipated sequel for me. So much so that I almost got in trouble breaking curfew to see a 9:30 show (would’ve gotten me home after 10:30). I didn’t. I went back the next morning for an early show.

II sets the Indians back so they can redo the underdog right down to Phelps buying back the team from Dorn. Wild Thing got rich and sold out so Sheen only has to do the hair for one scene at the end. Hayes (Omar Epps) became an action movie star (shade to non returning Wesley Snipes) and got lazy. Cerrano found zen religion. Taylor’s knees are too shot to catch so he becomes a coach. They even do some of the same jokes like Hayes sliding too short. 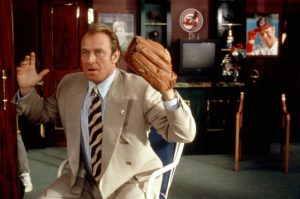 It spends be whole movie getting everyone back to the characters they were in the original. At least Taylor and Lynn are still together. Russo came back for one scene to show that, still the supportive prize for him.

The fans are excited from last season but get disillusioned when the team lets them down again. The groundskeepers have the funniest line about it because it’s a reference to their original joke. 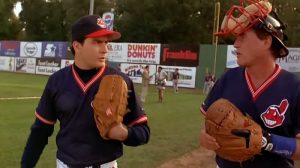 It’s funny, teenage Franchise Fred was perfectly happy with this reset because it gave me another Major League underdog comedy. Now Franchise Fred expects more. Show us the evolution, not the devolution. Mighty Ducks got it right. I’m glad I didn’t get myself grounded over that movie.

They even filmed Major League II at Camden Yards in Baltimore. I don’t remember why I never made it to watch them film or be an extra in the stadium. I mean, that would have been a grueling day of waiting, but it was rare for movies to film in Maryland. I missed all the filming of Patriot Games too, although more of their locations were recognizable Annapolis. 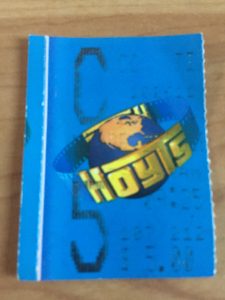 Hard to tell but I think this is Major League: Back to the Minors. The date and theater match up.

Back to the Minors is the last ditch effort to milk the name recognition without the creator or stars, although Bernson, Haysbert  and Bob Uecker came back, plus some of Major League II’s new recruits. Remarkably Rube (Erik Bruskotter)’s exact same throwing problem returned.

Harry Doyle (Ueker) got sober though so that counts as character growth. Maybe he got fired from MLB for drinking and that’s why he ended up in the minors. There’s also some blue screen because they must not have gotten all the shots they needed at the stadium.  At least it fulfilled the threat of the original of going back to the minors. 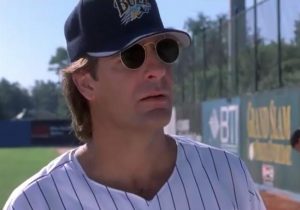 Scott Bakula is actually great as a disgruntled burnout who learns to care about the game again and his team. Walt Goggins gives it his heart and soul too, as he always does. 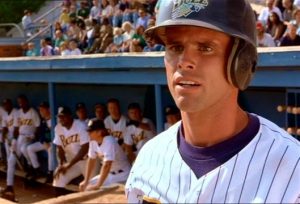 Theoretically it shouldn’t be hard to crank out baseball comedies as long as the jokes are funny. A ballet dancer (Kenny Johnson) is a solid idea for a wacky player (whose skill proves useful) in Back to the Minors. Nothings been as funny since the original.

During his meltdown, Sheen wanted to do Major League III. Even though there already was a Major League III I thought that would be a good idea. It would be a comeback for everybody. The franchise could redeem itself (if it’s funny), the Cleveland Indians could redeem themselves, Sheen could redeem himself, creator David S. Ward could have a studio film again. Taylor could be the manager now. There would have to be new younger players, so it could be Major League: The Indians Awaken.

Major League is available on Blu-ray, DVD and Digital, the sequels are on DVD and digital (and free with ads on Crackle which honestly is good enough.)