There’s often an argument that filmmaker David Fincher is a major cynic. I would contend that, for all his stylistic flourishes, he’s really just a very dry humorist with an exacting sense of craft. Fincher’s Mank is a scathing social critique of 1930s Hollywood seen through the eyes of alcoholic screenwriter Herman J. Mankiewicz (Gary Oldman) as he races to finish the Citizen Kane screenplay for Orson Welles (Tom Burke). The thought of building off of one of the greatest American films of all time could prove to be daunting. However, with the right attitude and voice behind the camera, there’s room for such a bold move.

Looking at what Mank accomplishes, while impressive as a production, there’s little surprise when it comes to singing the praises of the film’s technical aspects. The production and costume design, along with the art direction, do plenty to evoke a certain period in time, incorporating Hollywood’s glamor and opulence, along with the elite class who run it.

In an attempt to play as the perfect double-feature with Citizen Kane, all efforts were made to provide a look, sound, and feel akin to the 1941 classic. The sound design is clear to the point of having it echo off of the walls, which is sure to make some of the Netflix audience look around as if something strange is occurring. Adding to the atmosphere is the (at this point) requisite Fincher film score by Trent Reznor and Atticus Ross, which brilliantly works in driving the film through its old fashioned, lively, and haunting themes.

Kirk Baxter’s editing allows the film a smooth flashback structure similar to Kane, letting the action unfurl in two different timelines – one where Mankiewicz puts all his effort into writing a first draft for Welles in a secluded lodge, and another focused on memories of his friendships with famed newspaper mogul and Kane inspiration William Randolph Hearst (the great Charles Dance), his partner and performer Marion Davies (a winning Amanda Seyfried), and MGM co-founder Louis B. Mayer (Arliss Howard).

Then there’s Erik Messerschmidt’s beautiful, digital black and white photography. Incorporating whatever visual effects trickery and other forms of movie magic to recreate the time period, the stark use of light and shadows only builds the atmosphere that’s already working to draw a viewer in on its own accord. The visuals capture a certain feeling of the era while reminding the viewer of modern times. I’d argue that’s with purpose.

While set in the late 1930s, I found myself most impressed with the feeling of relevance this had on American’s political and social climate today. Perhaps that doesn’t help the film sound like a sterling and exciting representation of a behind-the-scenes look at the golden age of filmmaking, but as much as Fincher shines as a perfectionist filmmaker, it is the script where I found plenty to appreciate as well. Written by his father, Jack Fincher, a journalist who passed in 2003 (reportedly with some polishing by Eric Roth, the Oscar-winning writer also behind Fincher’s Benjamin Button), Mank has been the passion project Fincher has been waiting to make.

It makes it all the more fitting to see Fincher’s dream project realized at Netflix during a time when the studio system is swallowing itself up with billion-dollar mergers. Netflix is not exactly getting by on scraps either, but the seemingly nontraditional freedom they allow to their filmmakers enables Fincher and his team to work in a manner not unlike those in the 1930s who dared challenge an industry focused on business over the art. That’s proof right there that as much as things change, they also manage to stay the same, making the additional commentary all the more interesting.

Much of the film contends with Mank’s nature as an informed jokester, palling around with a conservative crowd looking to swat down anything veering remotely close to socialism. At that point in time, avowed socialist and famed author Upton Sinclair ran for California Governor, which becomes a subject of discussion quite often among the Hollywood elites. Not one to mince words, regardless of his own preferences, it becomes a thrill to watch Mank step just over the line in terms of his sobriety and pointed sense of humor, when arguing with those who oppose those deemed as radicals.

That Mank is arriving at a time when the public is dealing with a drawn-out presidential election that has to deal with dangerously false claims and distorted facts only highlights how a film written nearly two decades earlier about events from over 80 years ago can still be one with the times. One just has to look at what Welles had to deal with when daring to take a strike at a tycoon with the ability to manipulate his audience.

Keeping the wunderkind in mind, Welles only factors into Mank so much, but Tom Burke makes his presence felt. Fincher even has fun referencing the life Welles and his other films thanks to some notable camera placements and the appearance of a fake nose.

Of course, Welles is just one of many notable figures present in this narrative. Tom Pelphrey provides terrific work as Mank’s brother, Joseph L. Mankiewicz, a major filmmaker in his own right. Lily Collins and Tuppence Middleton provide reliable support as the woman in Mank’s life (Collins his aid, and Middleton as his wife). And while the aforementioned Dance does well in playing up Hearst’s quiet and intimidating presence, Seyfried’s take on the Brooklyn-accented Davies allows the film at least one character to latch onto when it comes to delivering some form of pathos.

Said to have been pushed to certain limits (Fincher does enjoy shooting many, many takes), Oldman, the 62-year-old Oscar winner, has all the command required as the titular character. His wry sense of humor, combined with his constant drinking and penchant for badgering on falls right in line with the spirit of films from this era. As Mank threads a line between those he criticizes (yet desires to be around) and the lower (more diverse) class he wishes to speak up for, it was easy for me to enjoy the long stretches of time that simply find Mank conversing with people around old Hollywood sets, let alone getting into ongoing arguments at fancy parties while holding onto that twinkle in his eye. It’s great work that needs the kind of energy Oldman can bring to a role like this.

With an eye on showing how the past is much like the present, in the midst of depicting the period of time that led to the production of Citizen Kane, I am much happier accepting the biopic that chooses something different and more specific. It would be simple and slight entertainment to simply chronicle the making of a famous movie. The Finchers have, instead, opted for something more exciting, biting, and current. The result is something better than good, better than what’s expected. It’s terrific!

Mank will have a limited theatrical release beginning November 13, 2020. It will be available to stream exclusively on Netflix beginning December 4, 2020. 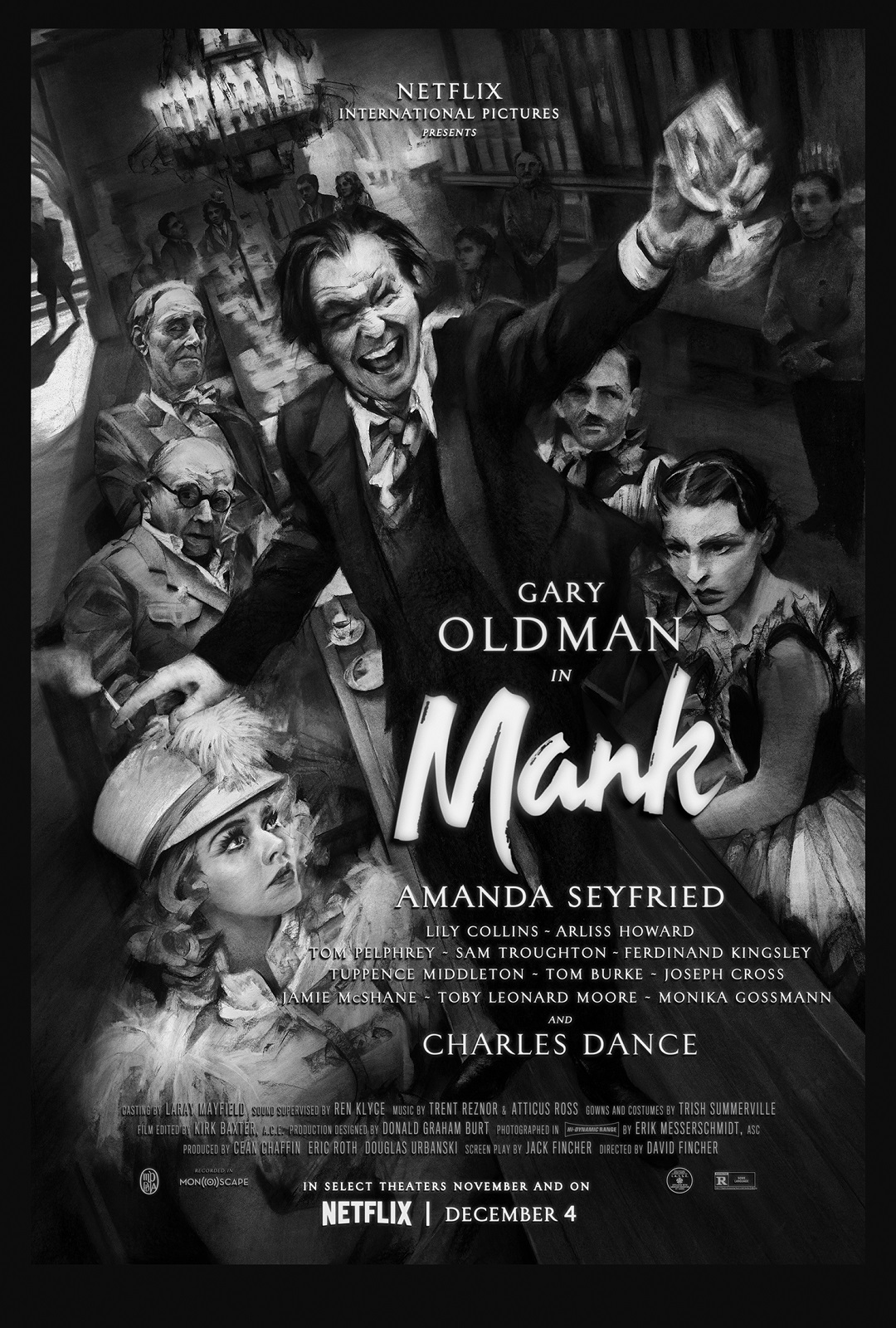 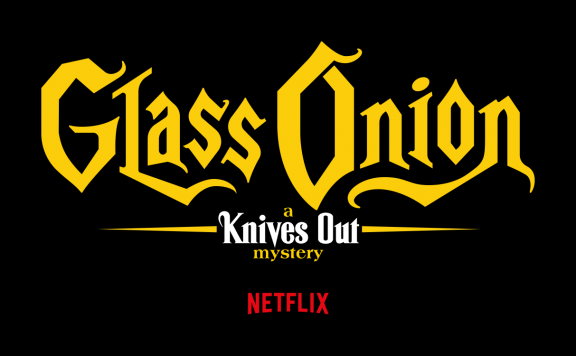 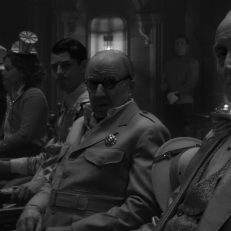 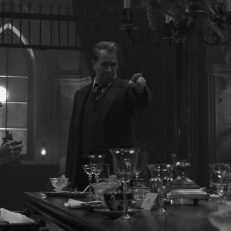 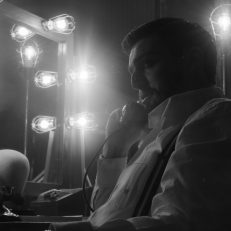 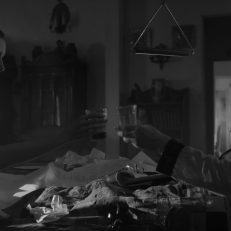 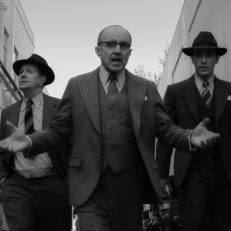 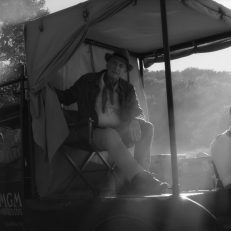 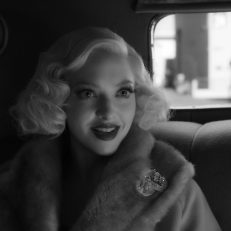 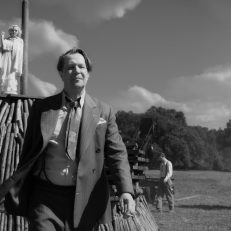