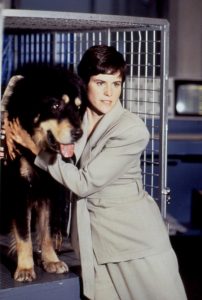 I would have liked a killer dog movie anyway, but I loved Man’s Best Friend even more in light of all the adorable dog movies like K-9, Turner & Hooch and Beethoven that preceded it. It actually follows the dog movie formula, only Max the dog makes messes by mauling people to death.

Like all the other dog movies, Lori Tanner (Ally Sheedy) wasn’t expecting to get a pet. She’s a journalist doing an investigative report on animal testing at EMAX, ends up setting Max free and man oh man does Max turn her life upside down.

You see, Max wasn’t the victim of your average cosmetics tests. He was a genetic experiment to crossbreed the deadliest, most aggressive animal traits in one killer guard dog. He’s got DNA of cheetah, chameleon and jungle predators to make this mastiff tougher than a German Shepard. 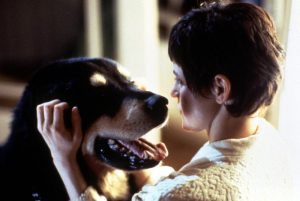 Max immediately saves Lori from a mugging and at first it seems like they’re made for each other, Lori giving Max a loving home saving him from abuse and Max protecting her and giving her the love even her boyfriend can’t. It would take some adjustment on Lori’s part, but Max’s love is work a little sacrifice. 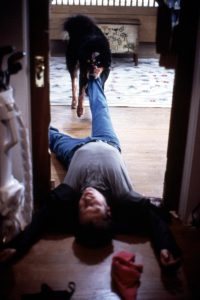 Max rolls over and acts cute to make Lori break to rules and let him in the house. He’s taking her attention away from boyfriend Perry (Fredric Lehrer) and interrupting their sex life. He starts to get aggressive with the paperboy, and later gets revenge on a couple of animal abusers. Dogs already have a good sense of character, and with Max’s enhancement he’s right about every dangerous person he attacks. 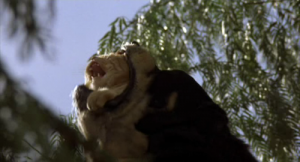 Kids sick max on the neighborhood cat revealing his cheetah powers to chase the cat up a tree and swallow it whole. The score even plays scenes like this and the overzealous dog catchers like wacky animal shenanigans. There’s a mailman scene too. Max gets jealous of Perry and retaliates by chewing through the brake line of his car. He pees acid and wait til you see him use his chameleon power.

Probably the most unsympathetic thing Max does is pursue neighbor dog Holly who clearly does not want him. We can forgive Max murdering A-hole humans who all deserve it by movie rules, and even an aggressive cat, but no means no, even for dogs. 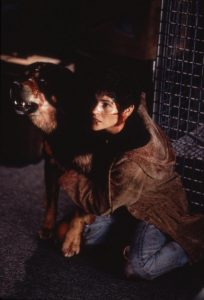 All the genetic crossbreeding means Max requires regular medication to counteract them and keep him calm. But it seems like Max is pretty in control of his powers the whole time. He’s sentient and protective of Lori and why wouldn’t he use his powers to defend her? Max even covers up his crimes in classic dog fashion. 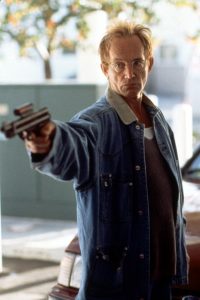 When Dr. Jarrett (Lance Henriksen) closes in on Lori she gives Max to a friend. This is played as the heartbreaking moment where a pet owner has to say goodbye to their loving friend. Only instead of the joyous reunion, Man’s Best Friend climaxes with Max on a killing spree.

Vivisection and animal abuse were big news in the ‘90s. Glad they totally stopped doing hat so we never have to worry about it again. Man’s Best Friend suggests both an extreme nightmare scenario about what vivisectors could really be up to, and a cautionary tale about protestors interfering with science. As a way to explain the killer dog, it’s able to have it both ways politically. 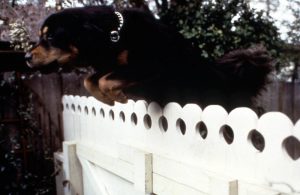 It even has the Turner & Hooch ending. Unfortunately like Turner & Hooch they never made sequels with Max puppies. If they made a Man’s Best Friend today it would have to riff on Marley & Me or A Dog’s Purpose. Those dogs touched their families in much deeper ways so there’d be much more vicious ways for Max to kill them!