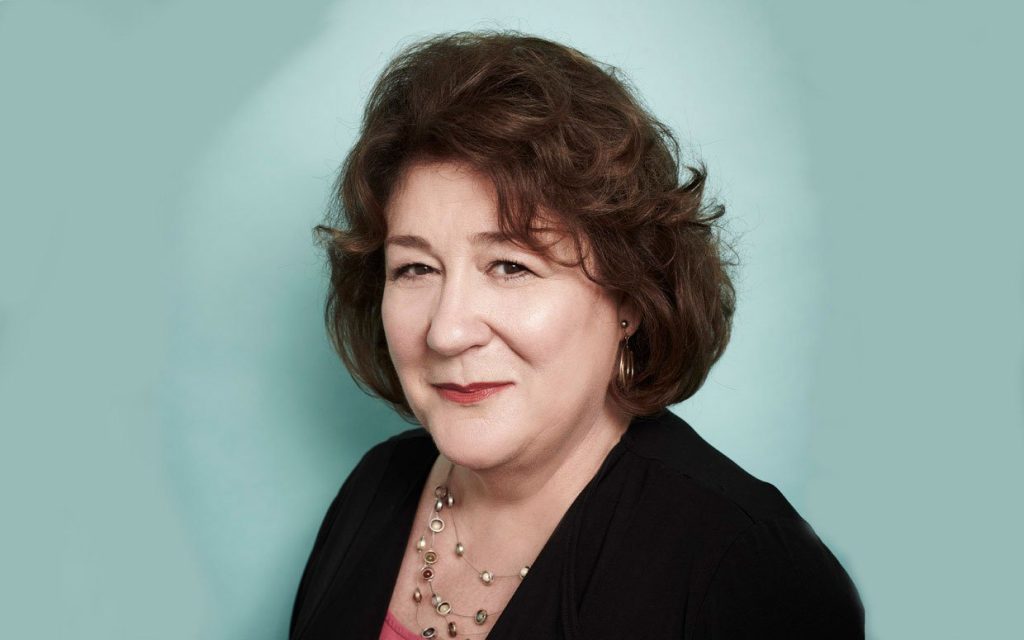 Exclusive Interview: Margo Martindale on The Hollars and BoJack Horseman

I got a chance to meet Martindale for her new movie The Hollars, directed by and co-starring John Krasinski. Martindale plays his mom, Sally Hollar, who is diagnosed with a brain tumor. The whole family reunites to help her through, including Richard Jenkins as her husband and Sharlto Copley as her other son. The Hollars is in theaters Friday and Bojack Horseman is streaming three seasons on Netflix now.

One thing I know we have in common is we’ve both shaved our heads.

Thank you. What was it like letting John do that in the movie?

Well, it was very vulnerable and very scary. It was a prosthetic.

Very convincing and still very scary because he shaved my head. He couldn’t screw up and we had one shot, as you only have if you’re shaving your head. It was a touching scene I love that scent.

How about your panic moment before surgery, how did you work up to that place?

Does it seem like all three men in this family need women to reassure them?

They do. I think that happens a lot. I think a lot of men need pushing. “Go to the doctor. Do this. Do that.” I think some men need strong women to help them along.

Does that start from the top down, from Richard Jenkins’ character and then his sons?

Since around the time of Justified, everyone really started to recognize you. Has that changed the way you’re able to disappear into characters?

No. I still think I can. Has it changed the way people see me? I don’t know. I’ve always done this. I just happen to get a really big part that people saw and responded to, but I’ve been acting all my life, disappearing into character.

You’re also able to play despicable characters and very loving, warm characters. Is one type more fun than the other?

Yeah, the mean ones are better. Not this one. This one was particularly fun.

Where do you go to find a character as warm, supportive and loving as this one?

What happened in this is that this movie happened to us. It was so available and we became this family, so it was a new and unusual experience for all of us. We became a family and we were those people. So it was like being with my family for 14 days.

Has that ever happened on other movies or shows?

I’ve always become the person, but this was very different. So no, I don’t think so.

Would August: Osage County become a family that’s as awful and dysfunctional as that family was?

Well, we did become a family. A very different kind of family, yes.

Was doing The Hollars more like working on a comedy or a drama?

Working on a drama, coming from reality. It tonally is perfect but it’s all coming out of the moment. That’s what makes it funny. It’s real.

Have you worked with many actors who direct also?

Did John have an understanding of how you work differently than some other directors might?

I think he understood every aspect of the process so I think it made it very easy to go from director to actor back to director back to actor.

I have to ask about Bojack Horseman. Did character actress and fugitive from the law Margo Martindale drown?

Me too. Me too. Oh, it’s so much fun and so hilarious.

When Raphael Bob-Waksberg first pitched you as a criminal version of yourself, did you have questions for him?

Well, nobody even pitched anything because Will Arnett and I were doing a comedy together and he said, “You’re going to come do my cartoon.” I was promoting August: Osage County and doing The Millers at the same time and I said, “I can’t. I don’t have time to do that. I don’t want to do a cartoon.” He said, “You’re coming to do my cartoon.” I said, “Will, please.” He said, “The part is Margo Martindale, character actress. You’re coming to do my cartoon.” I said, “Oh, I guess I am.” So I read it and I said to Will, “These people seem like animals to me.” He said, “They are animals.” I hadn’t seen anything. I didn’t know anything. Then on my Wikipedia page last year, my husband was looking after the last Emmys when I won for Americans, he was just seeing if it was on there yet. He read that I have been in prison for the last 14 months. Somebody had put on my Wikipedia page, for armed robbery. So we had to get that taken off.

So it was Will, not Raphael.

It was Will. Of course, now I know all of them now.

Did you regret that you didn’t get to be an animal like Cameron Crowe?

No, I’m very happy to be a human, Margo Martindale, character actress.

When they kept bringing you back, was it surprising?

I was flattered and happy to do it.

When they have you screaming and shooting guns, I know you can’t shoot guns in the recording boot but do you have props to work with?

I just use my hands.

On The Millers, the opening credits had a karate photo. Did you really pose for those karate pictures?

You already had photos of yourself doing martial arts?

I did a commercial where I was doing martial arts. I think I sent that to them, but I may be wrong. I can’t remember those. I swear I did that, but maybe not. Was my hair really frizzy?

Probably. I was more focused on the kicking.

Probably that was me. I was kicking really high too, wasn’t I? And I did really kick high.

Did The Millers become a family?

Oh, it was just a blast because we were together every day of the week except for Friday and Saturday. It was like doing a play. You really have camaraderie. It was really fun.

One of my favorite movies of all time is Walk Hard: The Dewey Cox Story. You weren’t musical in that, but was playing the all American mom an important archetype?

It was just such the all American journey of not just a musician, but the hero who hits rock bottom and redeems himself.

It was so funny. Oh, isn’t that funny. It is funny. “You’ve gone smell blind.” It was a blast. I don’t even know what I did. I had fun and it was a blast. I knew John so it was fun to play his mother.

And she never got to find out that he got his sense of smell back.

She didn’t, [Laughs] she was dead.

Days of Thunder was your first theatrical movie, but I feel like I’ve been seeing you forever.

That’s where I met John. We ran around together during that movie.

What was it like breaking into film in that era with Tony Scott?

It was Tony Scott, yeah. They were really interesting. They asked me to stay the whole movie. They liked me, because I wasn’t doing anything, but they liked me. I had a little baby at home so I didn’t want to be away anywhere. I wasn’t doing anything, so why in the world was I sitting in a chair going [Click] saying a line or two here and there. They wanted me to go to the racetracks down south and I said, “I want to go home. Let me go home.” I remember flying home with Robert Duvall and he said, “What are you doing on this plane?” I said, “I’m going home for Christmas.” He said, “What do you mean, you’re going home for Christmas?” I said, “Well, I live in New York. I’m down here doing the movie.” He thought I was the real pit girl so he was interested in me because I think he liked real people who acted.

That’s how good you were!

As the pit girl. [Click]. How I got into film was because I had done the play that was a huge hit, the original company of Steel Magnolias and everyone came to see it. So Hollywood came and it was very in the public eye, so people started asking me to audition for movies.

But not for the Steel Magnolias movie?

No, they asked me to audition but I was pregnant, not that I would have ever gotten it. I think they gave me the courtesy of asking me to audition.

The Rocketeer was a good one. Do you have good memories of that one?

It was a good one, it was a good one. Yeah, I have very fond memories of that movie and that came after Steel Magnolias. I auditioned on tape in New York and I became really friendly with Alan Arkin. He said such nice things to me on that movie, and then we got to do a television series together in 2000 so that was great.

What kind of character will you play in Sneaky Pete?

I play the matriarch of a family. We’re in the bail bonds business and our grandson comes home, Giovani [Ribisi] and we haven’t seen him in 20 years. And is it really our grandson?

Is she a tough mom in that?

It is fun. It’s really fun. We’re in the middle of it right now.

Margo Martindale on ‘The Hollars’ and ‘BoJack Horseman

Exclusive Interview: Margo Martindale on The Hollars and BoJack Horseman Character actress Margo Martindale has been in everything it seems. In fact, my favorite is her recurring cameo on Bojack Horseman who coined the phrase “character ...
0
Average User Rating
0 votes
Please sign in to rate.