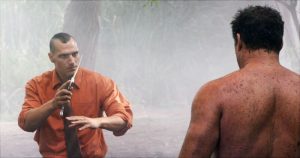 I discovered Marko Zaror in Undisputed III: Redemption and when his films Mandrill and Redeemer played at Fantastic Fest. I was excited to see him, many of him, in the big studio movie Machete Kills and will continue seeking out his unique brand of Chilean martial arts.

Savage Dog reunites Zaror with Undisputed hero Scott Adkins. Adkins plays a European boxer trapped in an Indochina prison camp who wants to keep him fighting in their underground tournaments. Zaror plays a gangster with fancy suits and sharp knife. Savage Dog is in theaters Friday, August 4 and VOD/iTunes August 8.

WLE: Was the mohawk your idea?

Marko Zaror: To be honest, I was shooting From Dusk Till Dawn so I had a really long mohawk, a traditional mohawk for the role Solo in From Dusk Till Dawn. When I started thinking about what could we do for this character, I cut it short first and Jesse said, “Oh, this looks so cool.” Kind of like we both decided why don’t we just keep it? It’s not long. It’s very short and you can keep the mohawk feeling but it’s not long. It was kind of like me and Jesse saw it and were like oh, let’s just keep it like that. It came out cool. I like it actually.

WLE: Did you have more dialogue in Savage Dog than any role before?

Marko Zaror: Yes. Actually there were a lot of scenes but you know how it is. We shoot a lot and then there are scenes that make it in the cut and there are scenes that don’t make it because of the length or whatever. Actually, there was even more but Jesse wanted to keep moving so I think he was able to take out some of that. For me, in this movie, I think I speak more than in all my other movies that I’ve done completely. I usually play like Scott in Savage Down, the silent guy who has some conflicts, the hero kind of silent guy like I did in Redeemer and my other movies. This one was heavy dialogue but I love it. It was a very good challenge and I’m really happy with it.

WLE: Were the fights different in Savage Dog with the knife fights?

Marko Zaror: Yes, actually the same thing. I never had the chance to fight with a knife. We did some cool techniques. [Fight Director] Luke LaFontaine helped me there. He’s a knife expert so we experimented with that and mixed it up with what I do in martial arts to show something more unique. It was a lot of fun, man. Good rhythms. It’s a totally different rhythm when you put together a fight scene with a weapon, especially a knife. It was a lot of fun.

Marko Zaror: Oh yeah, same thing. This movie, I got to do a lot of things for the first time in my career. The first time I hold a machine gun like that and just go crazy with it. It’s fun, man. 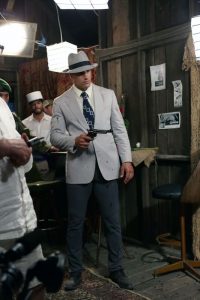 WLE: Were the nice suits tailored to you and was it nice to have such a fancy wardrobe?

WLE: Was it hot wearing suits in the jungle?

Marko Zaror: Oh yeah, trust me. Man, I sweat like I was sitting just doing nothing, sweating like I was in a sauna. It was crazy.

WLE: Since you and Scott go back to Undisputed III, did you want to do something different for your fight in Savage Dog? 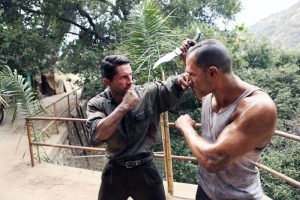 Marko Zaror: Yeah, because Undisputed III is a ring movie, and a lot of top acrobatics and ability, it’s a totally different setup. This one is a timepiece movie, more realistic, more brutal. I’ll say there’s more violence in the fights and there’s more cruelty. That’s more right to the point. So it was a good challenge as a martial artist to be able to deliver that. It was a totally different experience working on this fight and the Undisputed fight, but people will enjoy it for sure. In my character, I was able to explore savat, French savat. That has to do with the type of fighting that they used back then.

WLE: Has your career really taken off?

Marko Zaror: Of course, I’m having fun. I moved to L.A. so I think that’s a big part of it. Before I was just in Chile and was just considered for very specific things. Now I’m here so I’m more available. I think people have been calling me more and I feel lucky for that. I’m just really thankful. I’m thankful that things are working out and I’m having fun here. And I’m looking forward to keep doing it. I’m this year developing my own stuff. I love when they call you for a movie and you just have to focus on your thing, but then it’s also good when you create something and then you see it done. I mix those two things. This year has been a lot of creating too. I have some movie projects I’m pretty excited about.

WLE: Is Alita: Battle Angel going to tie you up for a while?

Marko Zaror: Not that I know of because I’m done with that. We’re finished shooting and now I’m looking forward to the release and seeing how it is. It’s a big movie, a big production.

WLE: Did you get Alita: Battle Angel because of Robert?

Marko Zaror: Yeah, Robert called me directly for it. He told me, “Marko, I’ve got a role for you to come here and have some fun.” It was incredible for me so it was a great opportunity. Working with Robert is always inspiring. I look up to him. He’s kind of like a mentor for filmmaking and how I started my career. I started my career doing my own filmmaking in Chile and then that got me over here. The attention that I got is because of my movies in Chile, little low budget movies. Then he’s like a mentor for that. It’s very inspiring. So now having him himself call me and consider me for these projects, I’m very thankful for that.

WLE: Was The Defenders able to let you do some martial arts?

Marko Zaror: You know how it is. Very, very secretive. It’s so hard to handle this because you want to be excited about it. You want to talk about it but you don’t want to get in trouble so I cannot really. The only thing I can say is on IMDB. I play the role of Shaft in the first episode and I definitely had some fun shooting it and doing it, but I can’t say more. We’ll see how it is when it comes out. He’s part of a group of assassins that makes things difficult.

WLE: Are you working on anything else with Ernesto Diaz Espinoza?

Marko Zaror: Yes. We’re doing something right now. Hopefully we’ll be shooting at the end of the year.