I like the thought behind Spider-Man: Far From Home. Following the conclusive Avengers: Endgame, the idea here was to take the friendly, neighborhood Spider-Man out of the neighborhood for a little while. This is the 8th Spider-Man film to come around since Sam Raimi’s 2002 original, so it’s not a bad idea to move Peter Parker out of New York for a bit. Even with the continued MCU shenanigans that require Peter to suit up and take on new threats, it’s fun to see the web-head out of his element. Plus, the vacation gives the character a chance to be a part of the high school coming-of-age comedy that began in Spider-Man: Homecoming. Without the weight of the entire MCU resting on his shoulders, Spider-Man: Far From Home is a fine way to settle this superhero universe back down.

It should be noted that some details involving the conclusion of Avengers: Endgame will come up, as this Spider-Man film most assuredly takes place after the events of the Infinity Saga. Really, when saying something as grandiose as “the Infinity Saga,” it’s quite relaxing to be back in the world of Peter Parker (Tom Holland), who is more concerned with how to handle his feelings for MJ (Zendaya), and what Happy Hogan (Jon Favreau) is up to with his Aunt May (Marisa Tomei), than what a genocidal purple maniac is doing. Regardless, Far From Home is a film that wants us to know how much it thinks about audience expectations.

With Tony Stark out of the picture and the world’s status quo restored after a five-year break, there are no doubt questions for what happens next. Far From Home doesn’t have all the answers (and only fuels certain speculations about how tragic the return of half the universe would be), but it does have some darkly comedic fun with this crazy scenario where a version of the end of the world happened and was then reversed. Peter may be mourning the loss of a mentor, but he’s also ready for some time off. Heading on a class trip to Europe means having that chance, but trouble always finds a way of popping up at the worst of times. 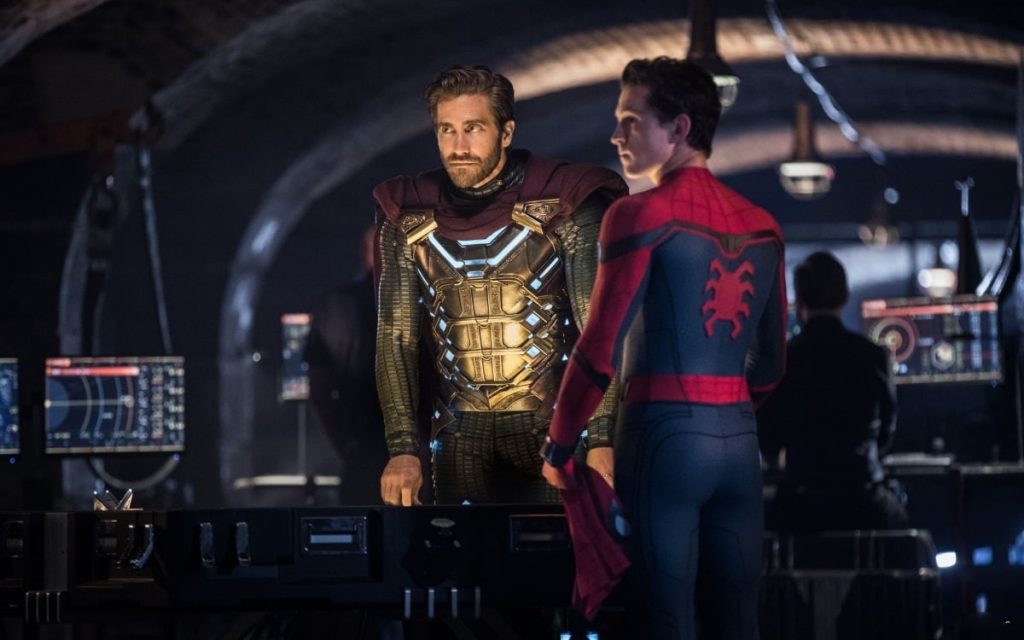 This time around we have Jake Gyllenhaal as Quentin Beck, a green-suited, purple-caped, flying man, wearing a fishbowl, claiming to be from an Earth in another dimension (part of the Multiverse). A hole has apparently been opened, following Thanos’ snap, which has allowed monstrous Elemental creatures to enter Peter’s world. Dubbed “Mysterio,” it would appear Beck has the power to stop these things, but needs the help of Nick Fury (Samuel L. Jackson) and his team, along with Spider-Man. The problem is, how will Peter find time to tell MJ how he feels, let alone have fun with Ned (Jacob Batalon) and the rest of his friends on what was supposed to be a relaxing vacation?

Jon Watts returns as director, and while I can’t say he’s left a directorial stamp as clear as Raimi’s or even Marc Webb’s, I can see what strengths he has found in his approach to this current take on Spider-Man. Along with the work from writers Chris McKenna and Erik Sommers, there’s a real drive to make Peter’s high school life as compelling as his role as Spider-Man. This is pushed so far that I ended up finding the events of Peter’s life more thrilling than what he goes through while wearing the mask. Yes, we get a lot of Spider-Man action, but for all the elaborate work to do something visually wondrous with the web-head in Europe (particularly when it comes to Mysterio’s trippy illusion powers), I can’t say it’s especially spectacular after the moment has passed.

In all of the Spider-Man films, one of the constant complaints has centered on how much Peter takes off his mask. Watching Far From Home, it’s easy to see why it’s done so much. When you overload a film with Spider-Man action, it begins to feel less and less real. Take the extended finale involving Spider-Man’s battle to save his friends and London. The visual effects are top-notch, and it’s exciting to watch, but also feels like most of the other MCU CG spectaculars when it comes to action finales – lacking in much personality. There’s a reason why the train fight in Spider-Man 2 is an all-timer. It blends live-action and CG elements well, without forgetting that we’re watching real characters battling each other. For Far From Home, I felt like I was leaving a more enjoyable film to go back to Spider-Man antics every so often. 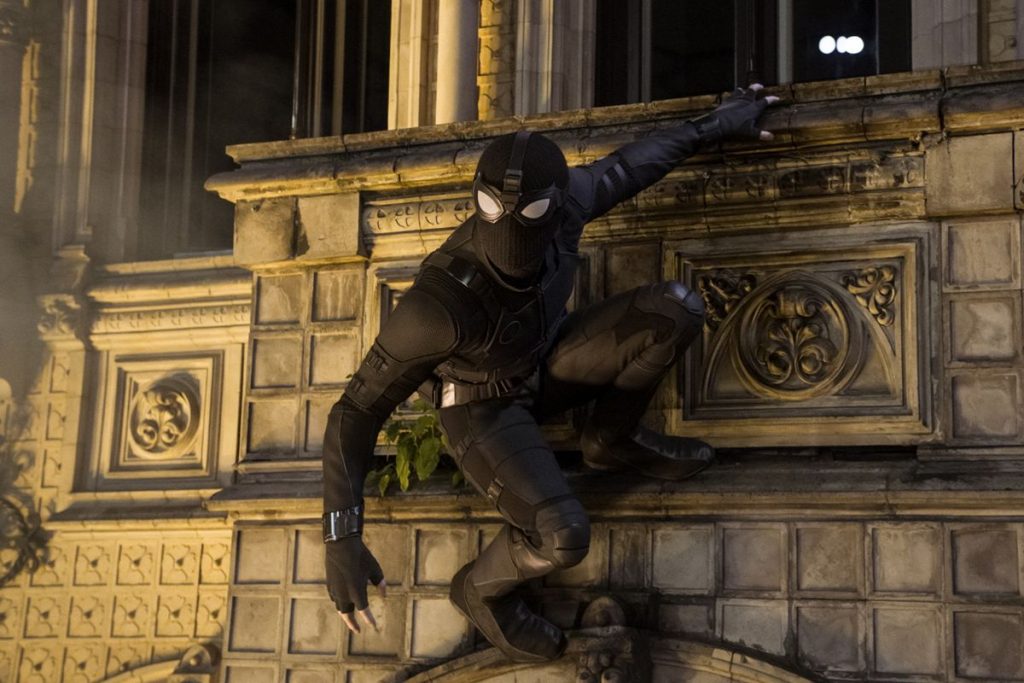 That’s not to say the superhero element of this superhero movie isn’t any fun at all, but it was more fun watching these comic book characters talking things out. Fortunately, the cast is pretty great. Holland continues to bring the right kind of charm to Peter. He’s smart, yet awkward, and still coming into his own as a kid with great power trying to understand his responsibility. While this iteration has put Uncle Ben into the backseat, this is another cinematic feature relying on how a key member of his comic book’s rogue’s gallery can serve as something of a mentor as well.

Gyllenhaal is up to the challenge. In his first Summer blockbuster since 2010’s Prince of Persia: The Sands of Time, the actor brings the same offbeat energy that has made him one of the strongest actors in his grouping when looking at all his non-major studio films. Gyllenhaal finds the right ways to make Beck a fun presence, from his acceptance of the name “Mysterio” to his regard for the costume he wears. Additionally, while not the deepest of characters, I appreciated some clever work done to explain Beck’s motivations.

The rest of the cast does what is needed as well. With these Spider-Man films having a breeziness the Ant-Man films have similarly relied on, it’s become less about how high the stakes truly are, and more about which roles show the best chemistry or highest laughs. Some of the humor is hit or miss (I’m thinking of the teachers, spiritedly played by Martin Starr and J.B. Smoove), but the film does excel when Peter is with his peers. Holland, Zendaya, Batalon, Tony Revolori’s Flash Thompson, and Angourie Rice’s Betty Brant are all in a zone that makes this a very kid-friendly MCU film. 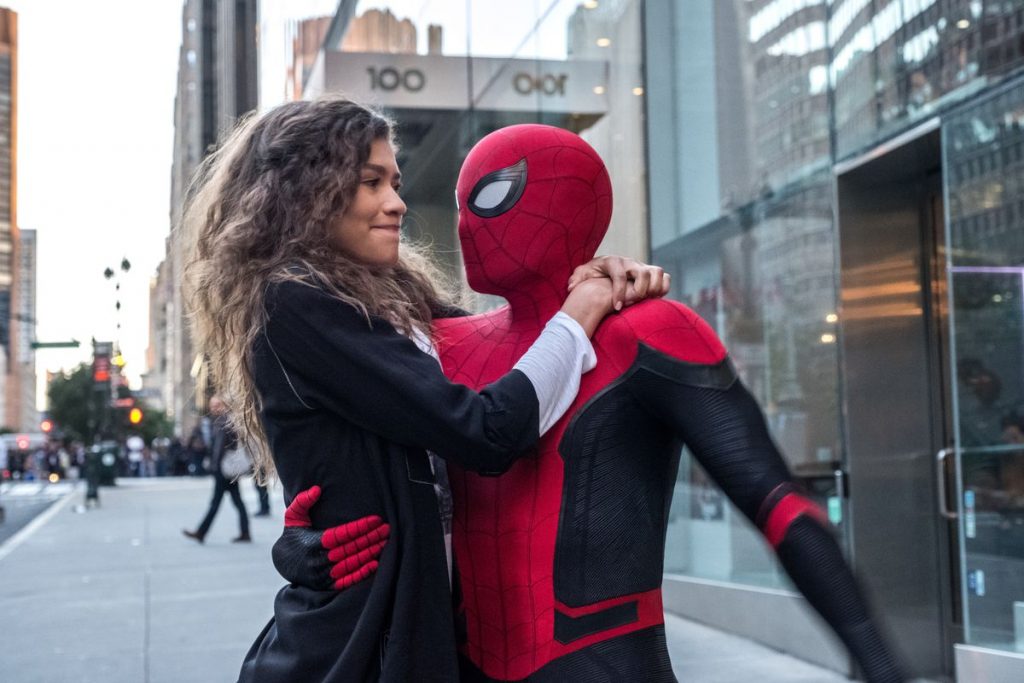 Jackson, Favreau, and Cobie Smulders’s Maria Hill have their share of fun as well. Jackson, in particular, gets to show what kind of figure he is going to be in contrast to Tony Stark. He’s challenging Peter on whether he’s worthy of being an Avenger, and while minimal, there’s something in his reactions that show the grief Fury has, as gruff as he may be. That is an area where the film succeeds as a whole, as we see Peter coming to terms with the absence of Tony. Favreau gets to chime in here, with enough reference to the past to highlight how these films work as a small part of a larger universe.

At a little over two hours, Far From Home covers a lot of ground. You could easily divide this film into two halves in terms of what an audience will realize concerning the story (and kudos to Sony for not giving it all away this time around), but everything finds its place. The movie is held together by what Holland brings as a Peter Parker/Spider-Man at the center of the story, as opposed to a well-utilized supporting player. I like the journey he goes on, even if there’s a bit too much weightlessness to some of his super heroics (though I’ll once again emphasize how cool it is to see Mysterio’s powers realized on the big screen). Whether or not Spider-Man: Far From Home needed to work as a crucial chapter in the greater MCU, I was more than happy enjoying this summer trip with Peter as an epilogue to the giant story that came before it. 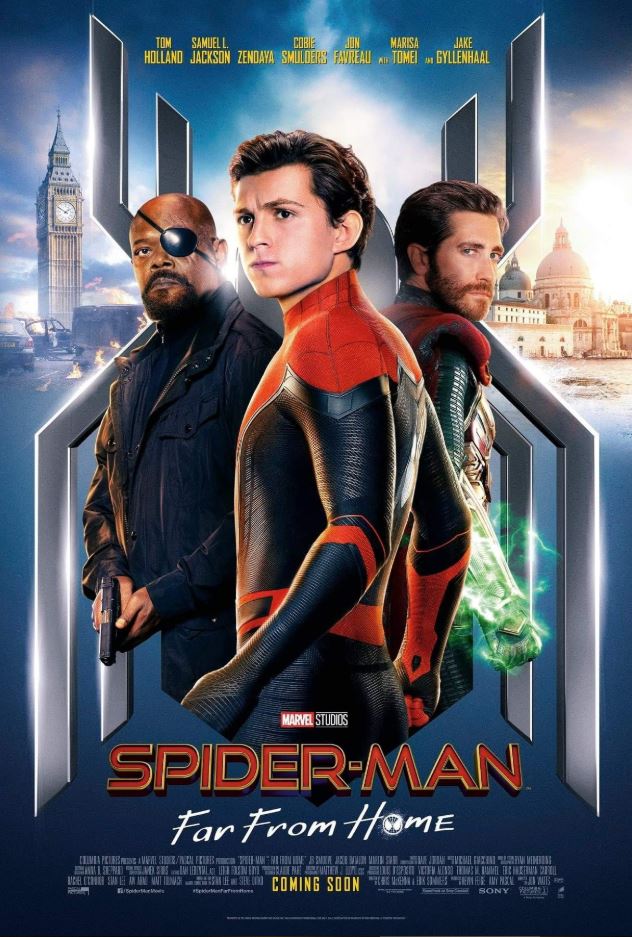 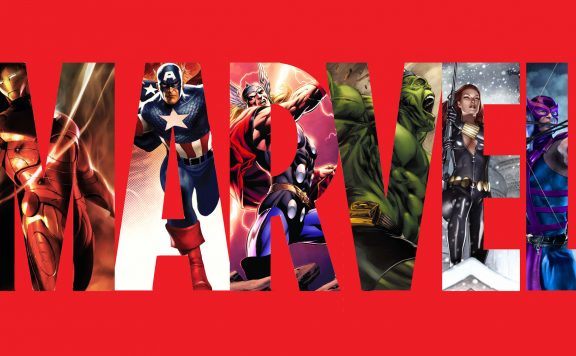