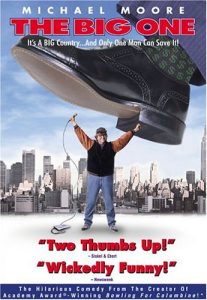 20 years ago today, Michael Moore changed my life. When his second film, The Big One, played at Cornell Cinema, I was a junior at Ithaca College worrying about my dating life. Then I saw families with real problems. People were unemployed and couldn’t feed their kids. These were problems I hadn’t had to worry about yet and the film really put it in perspective when my biggest problem was whether I had a date for Friday night. Ever since, I have paid attention to social issues and looked for ways to help.

I’d seen Roger & Me. It was nine years earlier so I was still a kid with many years before these issues affected me. It was also Moore’s first film so I think nine years later his skills and humor had developed significantly. 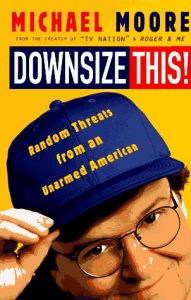 The Big One is essentially a sequel to Roger & Me. Moore wrote the book Downsize This!, and on his book tour he stopped at cities affected by corporate downsizing. He exposed companies’ unethical practices with his trademark comedic stunts.

Like a good sequel, it was bigger and badder, unfortunately because in real life corporations were getting greedier and badder. Roger & Me was focused on Flint, Michigan. The Big One exposed corruption in every city he visited.

I certainly agreed comedy was the best way to make a point. Even if I agree with you I am unlikely to listen to a lecture. Make me laugh and you reach my heart and soul. Moore is self-deprecating about photoshopping his book cover, and a biting satirist when it comes to exposing hypocrisy and corruption. 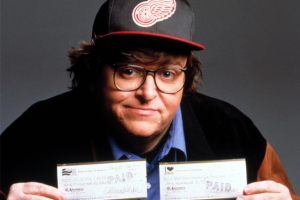 They really cashed these checks.

Some of the stunts make their point. Sending politicians donations from despicable groups to see if they’d take the money proves a point. Pat Buchanan cashed a check from Abortionists for Buchanan. Hemp Growers for the Clinton/Gore campaign is relatively harmless but still ruffled some feathers. I wasn’t sure if he was serious about Ross Perot cashing the Pedophiles for Perot check.

Other stunts, I see, are designed to fail. When he walked into the Johnson Company office with an oversized check for 80 cents of sweat shop labor, I thought it was confrontational. Now that I see a bigger picture, it may be more of a hollow stunt. No executive is going to respond to that. In Bowling for Columbine he would ambush Dick Clark and act indignant that he wouldn’t get an interview, when not even the most cooperative person would cooperate in that situation. 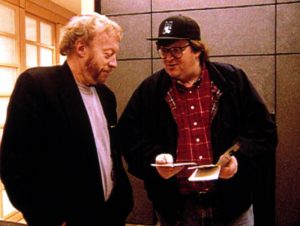 Nike CEO Phil Knight agrees to see Michael Moore, but he knows what he’s getting into.

However, bringing Phil Knight a video of locals agreeing to work for his Nike factory is constructive. Knight isn’t entirely wrong when he points out that saying you’ll work in a factory and actually working in the factory are different. Maybe not everyone in town would follow through. Knight listened though. Unfortunately he made it clear that he doesn’t believe 14 is too young to work in one of Nike’s Indonesian factories.

I did appreciate the bad boy nature of leaving the camera rolling when the execs wouldn’t speak to Moore on camera. You don’t get to hide from the truth when you’ve betrayed your loyal employees. 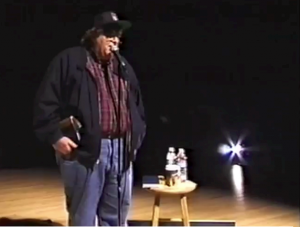 Michael Moore in a speaking engagement in The Big One

Moore addresses the executive statement of “obligation to our shareholders.” He points out that democracy says nothing about shareholders. I would go further and say a company shouldn’t be obligated to shareholders. Shareholders knew the risk when they bought stock. It would either increase or decrease in value. A company’s obligation is to its employees and customers. Without them there is no stock. At the very least, customers should vote with their dollars if companies and their shareholders are profiting off abusing and neglecting their workers. Then see how far the stockholders get them. Heck, at least come up with a way to defend shareholders without the subtext of “but not you, you don’t count.”

Moore’s compassion spoke to me too. Critics take issue with Moore including footage of him giving hugs to the distraught subjects of his documentary. I still find it effective to take a pause from the issues and focus on how it affects one individual human being. Is it biased? If so, I’d rather someone be biased in favor of humanity than towards objective profit.

God, this movie was precient. A Payday factory worker in Centralia, IL says America will collapse if it’s downsized to the point where everyone makes minimum wage, no one can buy $30,000 cars and higher end businesses will fail. We’re dangerously close to that 20 years later. It was houses more than cars that did us in but income inequality has only been exacerbated. The Carrier employees still lost their jobs. Don’t forget that.

The Payday exec reveals that had the company been more successful it would’ve moved sooner. So the employees were always creating their own obsolescence. That should be illegal. It’s certainly illogical and immoral. Locals complain about working harder than ever just to stay afloat. We still are. More hours, less time with family, less sleep, our health is worse.

The Borders employees invite Moore to their secret meeting. They had health care deducted from their paychecks and had no authorized doctor in their city of Des Moines! Borders no longer exists, mostly thanks to Amazon overtaking the entire book market. Media Play is gone too. The Rockford store is preserved in The Big One.  TWA is also defunct but their use of prison labor for their call centers was a disturbing revelation, and the comedy of speaking to a violent inmate on the phone is poignant.

The Big One remains the least talked about Michael Moore movie. It could be marketing, as this was a tiny documentary release from Miramax. As I said, I saw it at a college cinema and don’t even remember it playing arthouse theaters. 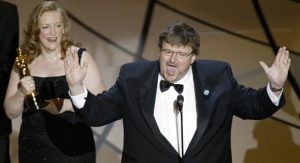 Michael Moore used his 2003 Oscar win to call out President George W. Bush, and set the stage for his next film, Fahrenheit 9/11.

Or, it may just be the mood of the country. Moore’s next film was Bowling for Columbine which captured a country beginning to grapple with the new phenomenon of school shootings. Moore’s Oscar win for Bowling launched his provocateur aesthetic into the stratosphere. After that he would take on a sitting president and the heath care industry, both hot button topics.

Maybe it says something about the country that his unemployment documentary got ignored. Maybe audiences see this as other people’s problems. Even Capitalism: A Love Story, coming right after the housing crisis, didn’t seem to ruffle the feathers of the establishment.

I still consider The Big One Moore’s most effective and convincing work. It is unfortunately equally relevant today as nothing has changed. It made this privileged college kid understand the real problems in the world, and decades later it just shows it wasn’t just a ‘90s issue. As long as we give politicians and corporations unchecked power, the names of the characters may change but the story will remain the same.