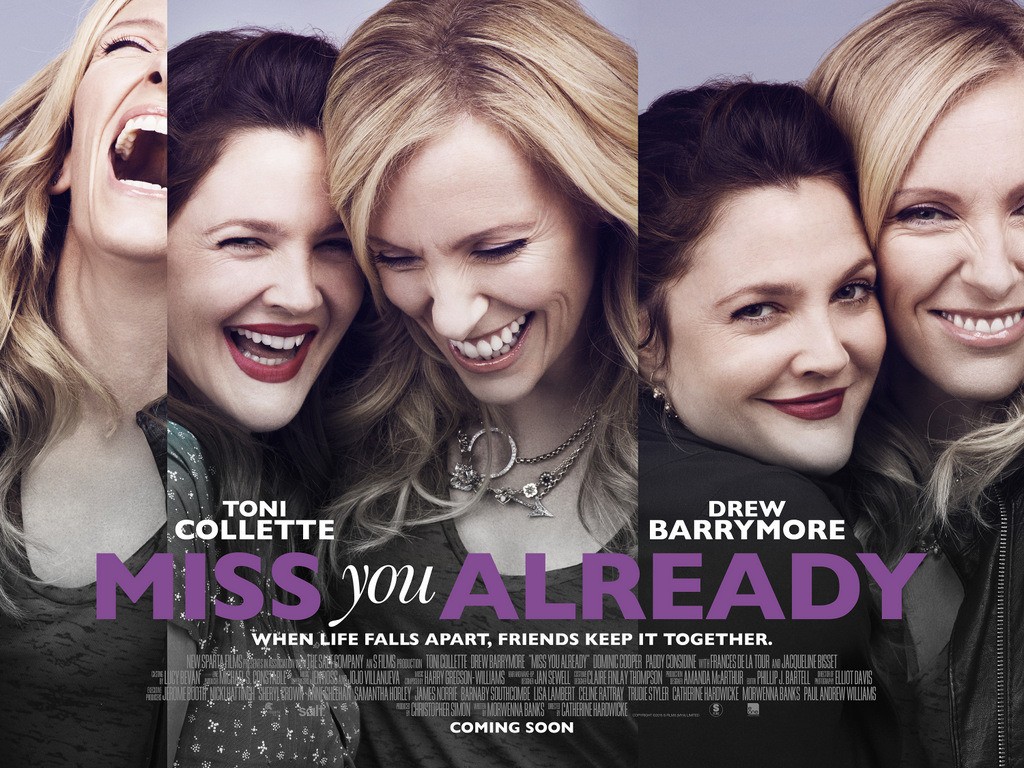 Miss You Already tells the story of two lifelong friends; Milly (Toni Collette) and Jess (Drew Barrymore) who despite living completely different lives still do everything together. During a routine trip to the doctors, Milly learns that she has breast cancer. Uncertain of its severity, Milly begins to keep to herself while her husband Kit (Dominic Cooper) and Jess begin to question her actions. Milly eventually works up enough courage and confesses to Jess that she has cancer. While the doctors seem hopeful that they can stop the cancer from spreading, Milly becomes increasingly worried that she won’t be able to beat the disease. As her symptoms worsen, Milly’s behavior leads to a series of events that test the strengths of her marriage as well as her lifelong friendship with Jess.

Almost everyone has at least one friend in their lifetime that they rely on and share everything with. Miss You Already is about that person. While I do think this film is geared towards a female demographic, I was still able to relate to a lot of what was going on throughout the film. The film does a great job of depicting and showing how having a disease like cancer can change your life as well as those around you.

Over the past 10 or so years, there have been dozens upon dozens of films with storylines about someone with cancer. It almost seems that it should be its own genre at this point. Surprisingly, Miss You Already takes a very raw look at the disease and doesn’t sugarcoat it. As the viewer, you see how the cancer effects Milly, her marriage, the lives of her children, and lastly, her best friend. The journey that we go on with Milly is an emotional rollercoaster filled with ups and down. There are moments where you laugh and there are moments where you will cry. The events that unfold throughout the film are all handled in a way that feel genuine to real life. It doesn’t feel like a Hollywoodized version of cancer but rather the real thing. 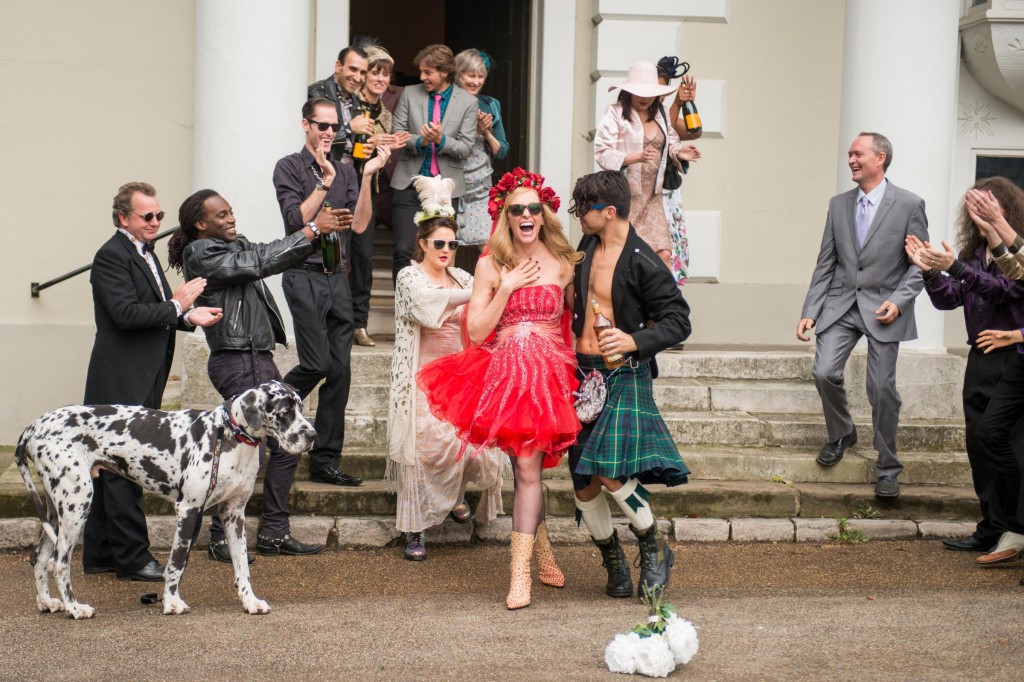 Morwenna Banks who wrote the screenplay must have really believed in Catherine Hardwicke’s and Toni Collette’s vision for her material. I bring this up because in my eyes Banks wrote a really ballsy script and wasn’t afraid to take some risks. There is one thing to portray a person with cancer in a realistic light but to do that and then make the main character out to be this flawed and selfish person is a bold move. Generally speaking, when we see films about people dying of cancer, the audience is usually manipulated to fall in love with the character with the disease.

That really isn’t the case here at all. Collette‘s portrayal of Milly is one that I struggled to like and care about due to her actions and how she treated those around her. It took me a while to actually realize that unlike so many other films dealing with cancer, I was watching an actress play a role about a real person with flaws rather than a perfect individual with a disease. Collette’s Milly is a hard one to see eye to eye with at times because she is selfish, superficial, and doesn’t seem to think how her actions will effect those around her. I think Collette’s performance here is great and at times is very raw as she really bares it all.

Unlike Milly, Barrymore’s Jess is more level-headed and grounded in reality. While I wouldn’t say Jess is flawless, I definitely found myself able to relate to the character. Jess is the type of supportive friend that doesn’t mind she isn’t the center of attention all the time. She was the one who despite having her own fair share of problems, understood that things weren’t always going to be happy all the time. In a weird way, Jess’ biggest flaw is her friendship with Milly which has some much needed growing up to do. 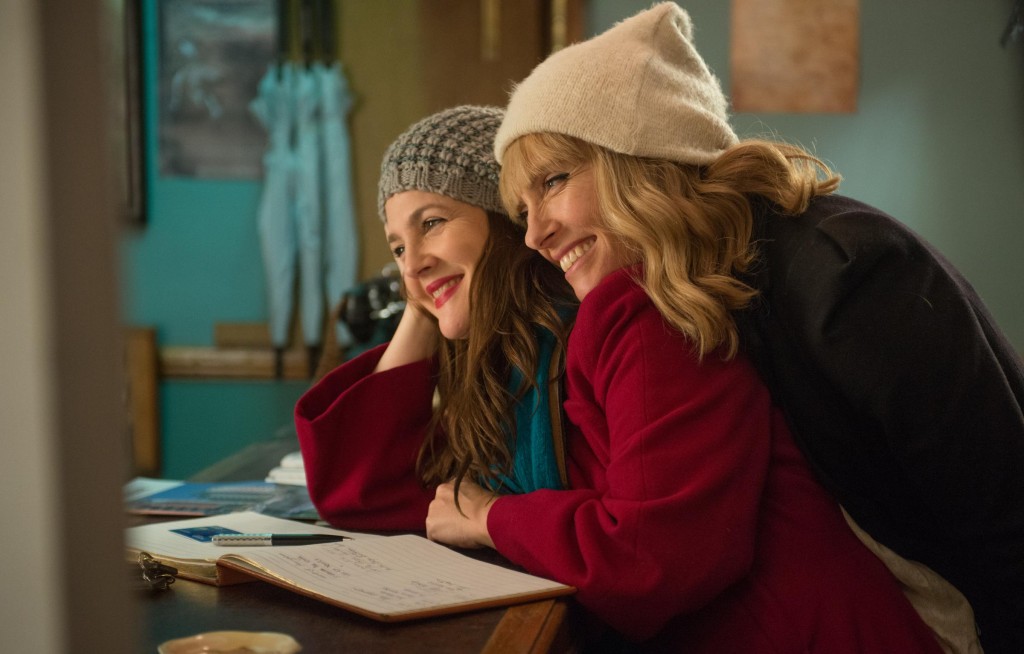 There is a point in the film where Milly and her husband Kit go out to celebrate her birthday. Milly gets upset that everyone just showed up because they feel as though Milly is now a victim of cancer. Milly storms out of the restaurant and decides she needs a break from reality. She forces Jess to go into the cab with her and they head to the Moors, a location that they always wanted to visit since they read the novel Wuthering Heights as children. The two share memories of their childhood while at the hotel before they begin to fight about something that occurs at the hotel. The fight scene in particular really packs a punch. Its one of those fights where the characters just release all their feelings and hold nothing back. Its a great and powerful scene especially for Jess who up until this point seemed to always be playing second fiddle to Milly.

This is without a doubt a female driven story but men do play a pretty significant part. Jess’s husband Jago (Paddy Considine) is just that likable nice guy who basically tries to support his wife and her life decisions. What’s interesting about Jago is unlike in most films where the nice guy is such a pushover, here is actually pushes back as the story goes on. Jess and Jago have discussions rather than full on fights about Milly’s erratic behavior and Jess’ constant need to come to the rescue. There is a good well-rounded character here. I also think Dominic Cooper does a solid job as Milly’s rockstar husband. The two play off each other nicely plus both are deeply flawed and complicated people dealing with a life-changing event. There is a third male character in the film but I don’t really want to get into him all too much as most of him would reveal some serious spoilers.

All in all, Miss You Already is a rarity when it comes to films about cancer. It will definitely pull on the heart-strings and make most who see it cry. Its not a perfect film as I do have some issues with the overuse of montages and how the Jago’s character is really overlooked in the third act, but for the most part this was a really well done film. It wasn’t afraid to show how cancer impacts everyone. It wasn’t afraid to have a lead character who is pretty unlikable and does things that hurt others just because it benefits her. There was a surprising about of heart to this film and was 95% of the time grounded in reality. If you can check this film out, I definitely recommend it to most. It is not always an easy watch but it definitely tackles the subjects of friendship and cancer in a very realistic and believable fashion.

MovieManMenzel’s final rating for Miss You Already is a 8 out of 10.