The Mission: Impossible franchise has had a unique evolution. At first it was a franchise where each movie would be a standalone adventure from a different director. It would bear that director’s stamp and be self-contained, with recurring characters. A little continuity crept in with Ghost Protocol giving Julia (Michelle Monaghan) an epilogue, but Fallout is the first one that directly follows the aftermath of the previous film. It’s also the first time a director returned for a second film. 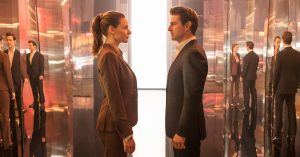 Fallout sort of accomplished what Quantum of Solace attempted as the sequel to Casino Royale in a franchise that never had a direct sequel before (not even following up On Her Majesty’s.) Now, I love Quantum of Solace but I don’t really see it as Casino Royale 2. It loses track of that fairly quickly but I’ll get into defending Quantum for its 10th anniversary. Perhaps retaining the director and not having a writer’s strike interfere made Fallout a much more cohesive sequel to Rogue Nation than Quantum could be. 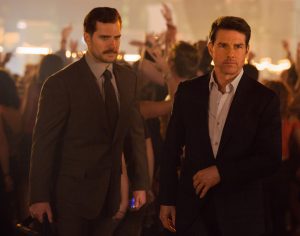 The fallout is the terrorists who sprung up in the wake of Solomon Lane (Sean Harris)’s capture. Ethan Hunt (Tom Cruise)’s new mission involves breaking Lane out. On the surface, handing Lane over to some equally shady villains seems like the lesser of two evils in return for getting some plutonium out of the hands of terrorists, but of course Ethan Hunt won’t accept those options. Watching him outsmart both sides is part of the fun. 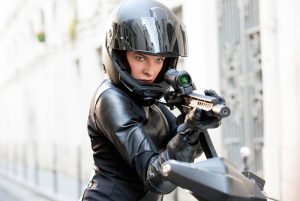 While previous Missions had holdovers like Luther (Ving Rhames) and Benji (Simon Pegg), Fallout really uses the chess pieces from Rogue Nation to deepen the franchise. Ilsa (Rebecca Ferguson) can’t let Lane go free and also becomes a pawn in the plot against Ethan, but of course Ilsa’s too badass to be anybody’s pawn. It really goes three movies deep if you count the threats against Julia, so that sort of interweaves all the sequels from M:I III on, in an organic way that doesn’t require viewing them all, but is rewarding if you do. 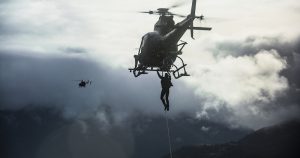 The caption reads “Tom Cruise on the set of MISSION: IMPOSSIBLE – FALLOUT.”
Yes, “the set.”

Most of the Mission: Impossible movies have their standout action scene in the middle. The Langley break-in, the Burj Khalifa climb, the motorcycle chase and underwater break-in all come in the middle. Mission: Impossible – Fallout truly saves its best show for the finale. All the action is exciting, but that helicopter chase is incomparable. I do love the parking garage finale of Ghost Protocol but it’s not the part of the movie everybody talks about. The helicopters will be.

So let’s celebrate that we now have six Ethan Hunt adventures to enjoy, and the last four have been great. The first two have fans (usually not the same person, but one or the other), but whatever stumbles Mission: Impossible made early on, they’ve certainly found a groove to keep challenging themselves to get better and better.