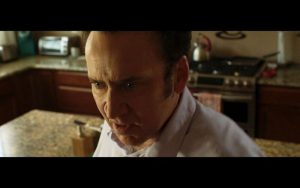 Nicolas Cage as a dad who goes crazy? Sold. Actually, I’m still sold on “Nicolas Cage in a movie.” Some of these straight to video movies are more ambitious and compelling than his mid ’00s theatrical movies. Mom and Dad is no The Trust or Army of One but it beats Dog Eat Dog or The Runner.

The Ryans seem to have a normal life. Brent (Cage) plays with his son Josh (Zackary Arthur). He doesn’t like his daughter Carly (Anne Winters) seeing her older boyfriend so he’s protective. Kendall (Selma Blair) is ready to go back to work but it seems like the job market has passed her by. Then in the middle of the day, adults start going rabid and attacking children. 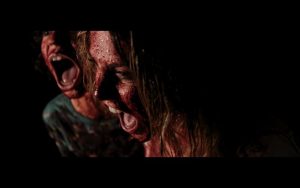 Not since Cooties has a film had the balls to murder children, only this time the kids are truly innocent. Mom and Dad asks kids to commit violence in self defense.

Cage makes Face/Off and Raising Arizona faces, but he’s actually crazier before the outbreak. He does the Hokey Pokey with sincere passion but that’s just how he expresses his midlife crisis to Kendall. It’s not the alphabet but it’s something Cage hasn’t done before. 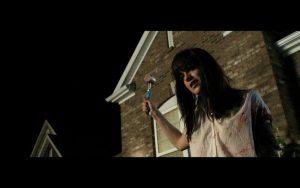 Mom and Dad makes the connection between actual frustrations of parents and this extreme. It’s a tad on the nose. Yes, parents go a little crazy because they invest everything in their children until there’s none of themselves left. At least it has perspective on the family unit.

The film becomes largely a standoff in the basement. There’s some fun stuff before the kids hole up down there and a good carnage finale, but it contains the outbreak for practical and presumably budget purposes. 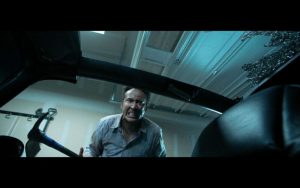 The style is mostly straightforward. With a premise like this, it doesn’t really need Crank style to sell it, but it would have certainly been a fine opportunity for it. Needle drops to juxtapose the violence a little obvious.

They didn’t really figure out an ending. There’s a fun reveal in the third act but not as strong a resolution. Oh well, it’s a breezy 80 minutes of Cage being nuts and Blair trying to hold the family together. That’s time we’ll spent.