In Hollywood, it’s not enough to just make a movie about boys driving monster trucks and having an adventure. Someone figured out if there’s an actual monster in the truck, then they can sell twice as many toys! Franchise Fred has to respect the synergy.

The Terravex energy company is drilling for oil in Utah when they unearth some creatures from deep below. They capture two of them but one ends up in the garage of high schooler mechanic Trip (Lucas Till). The creature, which neither Trip nor the movie ever bothers to name, gets stuck in Trip’s truck, so by the time the bad guys come looking for him, the monster takes control of the truck and helps Trip and his study buddy Meredith (Jane Levy) escape. 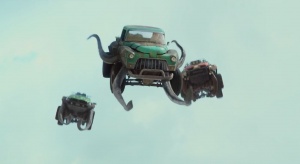 There are a lot of real driving stunts in Monster Trucks, just with the CGI creature added to them. They’ve got a monster truck car crush, and the victim is a briefly introduced sleazy used car salesman so he deserves to have his entire stock crushed. There’s actually a lot of hit and run in this movie, but I guess I take that for granted in every car chase I’ve ever watched. There’s also a great “building trucks” montage.

Stunts that look like they are entirely animated trucks lose the visceral thrill of seeing an actual monster truck show worked into the plot. There is something to be said for seeing big stuff crush other big stuff, and I don’t want to dismiss it as strictly a male pleasure. Women can enjoy destruction too.

There are other aspects of Monster Trucks that seem more specifically tailored to little boys at the expensive of inclusiveness. Amy Ryan plays Trip’s mom in only one scene of dialogue and another shot in a montage. Yet Trip has two or three father figures in the  film: mom’s sheriff boyfriend (Barry Pepper), his biological father (Frank Whaley) and the owner of the scrapyard where Trip works, Mr. Weathers (Danny Glover). Would it be too much trouble to show that a mother can have just as positive an impact on her son, or at least play an equal role in his life? 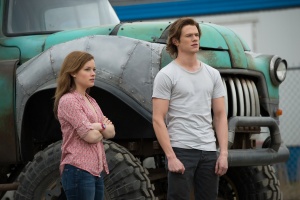 I really don’t understand why Monster Trucks makes such a point that Trip and Meredith are not boyfriend and girlfriend, or even interested in becoming involved. Boys Trip’s age like girls, although maybe not boys the age intended to watch Monster Trucks because, to quote a friend, “ew girls.” And it’s not that Trip is more interested in boys. That would be progressive but no, we’re talking about prepubescent disinterest. Yet the bully’s girlfriend keeps making eyes at Trip as if she’d be his fantasy, and he doesn’t acknowledge her either.

Aside from reinforcing some boys clubhouse stereotypes, Monster Trucks is pretty fun. It occurs to me that when I was the age Monster Trucks was made for, I had to wait until the summer to see a movie this big. Now they can crank out movies like this every month, although perhaps it makes it too easy. The more animation intensive sequences are less spectacular than the movies that have to make something happen in front of the camera, not just paint it in later. 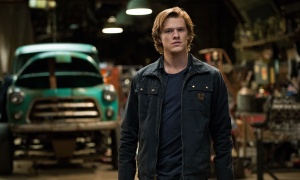 The jokes aimed at adults stand out because they’re so out of place that the child couldn’t possibly understand the scene on a more basic level. There’s a joke about Stockholm Syndrome in reverse. Are you going to explain to your kids why that’s funny?  Not because it’s too mature for them, but because why would they care?

The relationship between Trip and his car monster won’t go down in history like E.T. or even Bumble Bee in Transformers, but it gets the job done for a day out at the movies. Hopefully today’s kids are growing up with so much inclusion they won’t even think about the gender issues that gave me a few moments’ pause.

Monster Trucks Review: For The Boys

In Hollywood, it’s not enough to just make a movie about boys driving monster trucks and having an adventure. Someone figured out if there’s an actual monster in the truck, then they can sell twice as many toys! Franchise Fred has to respec...
0
Average User Rating
0 votes
Please sign in to rate.